Home News How much does animal agriculture and eating meat contribute to global warming?

This post is an updated intermediate rebuttal to the myth “Animal agriculture account for 51% of CO2 emissions“. It was written by Zack Chester as part of the George Mason University class Understanding and Responding to Climate Misinformation, combining climate science and communication best practices to debunk common climate myths.

One myth argues that animal agriculture is the greatest contributor to global greenhouse gas emissions, claiming it accounts for 51% of annual global GHG emissions. 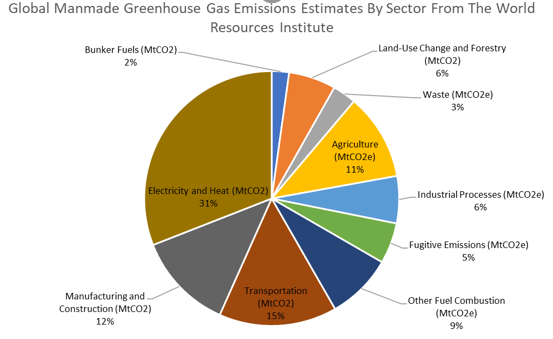 While animal agriculture is a significant contributor to GHG emissions, it is not actually the biggest contributor, as the myth claims. The calculations used to get the 51% of global GHG emissions are, at times, inaccurate or inappropriate, leading ultimately to a misrepresentation of the impact of animal agriculture. This rebuttal will be split into two main parts, the first discussing the actual causes of GHG emissions and the second discussing how the non-peer reviewed report by Goodland and Anhang arrives at the 51% number.

Burning Fossil Fuels Really Accounts For The Majority Of Emissions

All estimates on carbon emissions have uncertainty, but different credible sources agree that burning fossil fuels for heat and energy is the largest contributor to global GHG emissions. Independent reports, some of which will be discussed in the following paragraphs, use different methodologies to arrive at the contribution of global GHG emissions. These differences are to be largely due to things like how the variables are grouped, such as grouping land use with animal agriculture or combining manufacturing and production with industrial processes. It is important to note, however, that while there are differences in these figures and numbers, the reports consistently conclude that burning fossil fuels for energy and heat is the largest contributor.

This is not the only estimate of various sectors impact on global emissions. The Intergovernmental Panel on Climate Change (IPCC) is a body of the United Nations focused on studying and understanding human induced climate change. The United States Environmental Protection Agency reports global emissions in the same way that is reported by the IPCC, shown in Figure 2. By these estimates, electricity and heat production account for 25% of global emissions, agriculture, forestry, and land use make up 24%, industry 21%, and transportation 14%. These estimates are different from those noted before, but the reason for the difference is important. 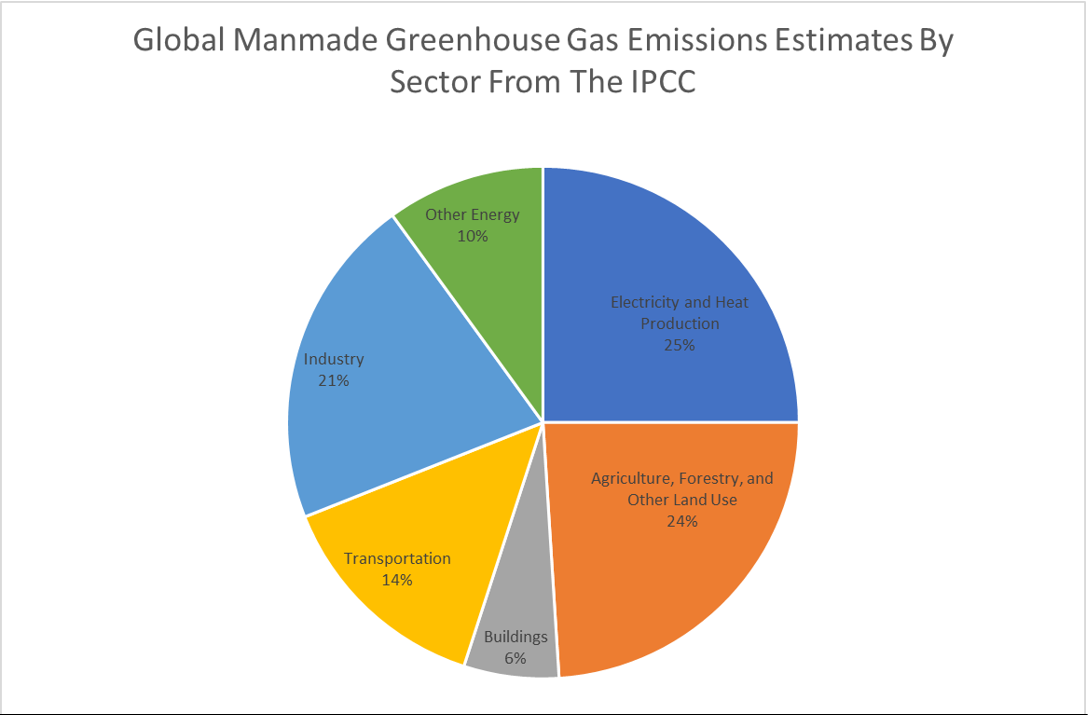 For the World Resources Institute and IPCC, the sources for their information and how the numbers are derived are publicly available, compiling reported data from across the globe. As mentioned before, the reason for the differences are largely in grouping. The following section will discuss how the 51% myth bases its numbers on exaggerations and uses completely different methodologies from both of these groups in deriving its numbers.

The 51% Figure Is Based On Poor Assumptions and Exaggeration

As mentioned above, the 51% claim comes from a non peer reviewed paper, containing a series of flaws and fallacies used in arriving at their number. A peer reviewed critique of the paper highlights many of the flaws that consistently exaggerate the effects of animal agriculture. One example is how the paper handles livestock respiration. When animals and humans breathe, CO2 is emitted into the atmosphere and taken in by plants, then converted to oxygen. We breathe and eat the plants and the cycle continues, so when we breathe out, we are returning CO2 that was already there. This is why human and animal respiration are excluded from carbon dioxide emission assessments, as the carbon cycle is accepted to be net zero over the span of years to decades.

Figure 3 helps illustrate the carbon cycle. If this paper chose to take a stance that animal respiration is not net zero, it is possible to account for animal respiration in the emission budget. However, it is also important to calculate the absorption and consumption of CO2 as well to quantify the imbalance due to respiration, which is not done. On top of that, and more pertinent to the matter, if the authors of the paper think that the carbon cycle is not net zero, it would also be necessary to include human respiration in the calculations to adequately assess the appropriate contribution of human CO2 emissions. They assume that the emissions of over 7.5 billion humans alive today are net zero, and livestock emissions are not, which is cherry picking. As is, the paper oversimplifies the issues, leading to a misrepresentation of animal agriculture’s contribution to global GHG emissions. Accounting for these issues would cause a major change to the 51% value in the report, as over 26% of the reported emissions by animal agriculture come from animal respiration.

This hypothetical approach is inconsistent with the way that the World Resources Institute and IPCC report global GHG emissions. It is a problematic approach because it then uses the total worldwide emissions that both of these sources report to derive its 51% as opposed to driving and reporting a different, larger, total worldwide GHG emissions total, as would be necessary. Other sources, like fossil fuel burning, are not scrutinized to the point of considering what emissions would be if they were also changed to meet these ‘what-if scenarios’, which would ultimately lead to a vastly different worldwide emission totals (Herrero et al 2011). That is not to discredit ‘what-if’ thought experiments – they can be helpful in outlining potential future changes. But in a study on actual current emissions, it is inconsistent and inappropriate to include them as emissions. Altogether, these errors consistently overestimate the impact of animal agriculture.

Everyone Can Help The Environment In Their Own Way

Similarly, one oversimplifying argument is that even if animal agriculture is not the main cause of global emissions, going vegan is the easiest thing one as an individual can do to lower their impact on global emissions. This is a difficult argument to support or disprove, as the benefit and ease of going vegan comes down to personal choices as well as the region one lives in. Everyone lives a different life and a person’s health, their living situation, and personal choices all play a role in the impact that they can make in reducing GHG emissions. There is no cookie-cutter, one-size-fits-all solution as to what can be done. The best way that you can lower your impact on global emissions is to be cognizant of your actions and actively work to minimize activities that create emissions whenever possible. For anyone interested, a list of some ways you can modify your lifestyle is included here. While animal agriculture does not contribute most of the CO2 emissions, it is still a significant contributor. Nevertheless, creating misleading or erroneous statistics to push a false narrative is counterproductive and only serves to hurt the causes that one is seeking to advocate for.