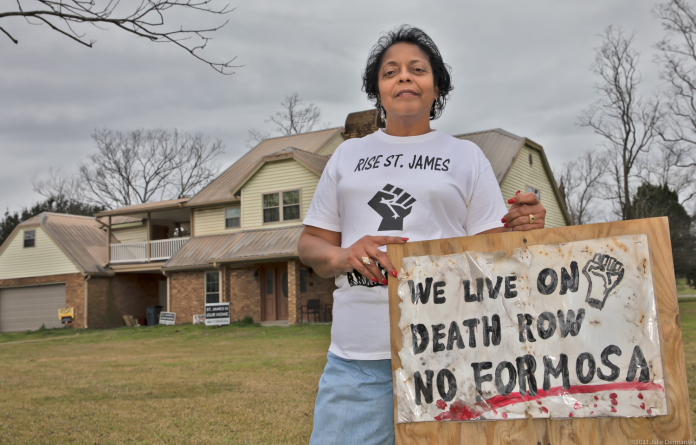 And around 10:00 p.m. that night in St. James Parish, a wind gust from Ida lifted most of the roof from the home of Sharon Lavigne. Lavigne, inside, prayed that the roof wouldn’t fly away entirely, she told DeSmog Monday morning. And indeed, one portion of the roof remained, over a bedroom where the 69-year old retired special-ed teacher sheltered as Ida howled around her. Ida’s sustained wind speeds at the time exceeded 100 miles per hour, National Hurricane Center reports show, with higher gusts.

After the storm passed, she emerged in the morning to find ceilings caved in and the contents of her home soaked.

“This is the worst storm I ever went through,” Lavigne, who earlier this year was awarded the prestigious Goldman Prize for her environmental advocacy with community group RISE St. James, told Julie Dermansky, who covers the region for DeSmog. “My house is destroyed. I’m not sure it can be fixed.”

Lavigne’s home sits in a region known internationally as “Cancer Alley,” due to the pollution from the large number of oil refineries, plastic manufacturing sites, and other fossil fuel infrastructure clustered in the southern Louisiana region. The Gulf Coast is also prone to hurricanes, which climate scientists say have been made more powerful and unpredictable by the changing climate.

Ida’s track shows the storm’s eye crossed the Mississippi to the west of New Orleans as it traveled north towards Baton Rouge. “This largely Black-populated stretch of the Mississippi River between New Orleans and Baton Rouge is lined with more than a hundred refineries and petrochemical plants,’” DeSmog has previously reported.

“It is a total disaster,” Lavigne told DeSmog. “Roofs are off on many homes. The air smells horrible. Poles and trees are down everywhere and the [oil and chemical] plants around the Sunshine Bridge are all flaring.” The Sunshine Bridge crosses the Mississippi River into St. James Parish and is neighbor to multiple chemical plants.

Ida knocked out grid power to the city of New Orleans and nearby communities, with utility company Entergy warning that just assessing the scale of the damage will take days.

Overnight, individuals and families trapped in attics by floodwaters in nearby LaPlace, in St. John the Baptist Parish, posted cries for help on social media. This morning, the “Cajun Navy,” an ad hoc flotilla of volunteers who self-organize when floods strike along the Gulf Coast, headed to LaPlace to assist with rescues. “First and foremost it will be rescues of people on roofs and attics,” Jordy Bloodsworth, a member of the Louisiana Cajun Navy and Storm Patrol, told KATC News. “We’re going out in boats to do water rescues first.”

St. James Parish, a half-hour drive away, appears to have fared better from Ida than LaPlace — and other communities further to the south, which were battered by wind gusts that exceeded 172 miles per hour in Port Fourchon, where Ida made landfall.

The damage in southern Louisiana is widespread and it could take days to restore power in some parishes that appear to have taken an even harder hit from Ida, like Lafourche and Plaquemines.

Homes belonging to other members of RISE St. James, who have been opposing new petrochemical plants like the proposed Formosa plastics plant from being built in their already burdened region, were also damaged in Ida, according to Lavigne. She toured the area with Pastor Harry Joseph, who led a fight against the Bayou Bridge pipeline, whose construction was ultimately completed in 2019.

Lavigne and Joseph borrowed a phone from Romell Lavigne, Sharon’s son, as neither has phone service at the moment. Romell, who lives nearby, has been working with other community members to remove felled trees from roads.

As of Monday morning, Lavigne said that she had yet to see any emergency vehicles, adding that she believes they may be in Laplace and New Orleans, both east of St. James. Around noon, the Beauregard Parish Sheriff’s Office posted images on social media of crews headed to St. James Parish “to help with the recovery effort there that we as a community are all too familiar with.”

Difficulties getting around the area were highlighted when St. James Parish officials asked residents to stay off the St. James levee, writing: “The top of the levee is the ONLY available transportation route for our emergency crews to travel. We ask residents to please remain off of the levee in order to allow for our crews to continue clearing debris, and repairing damages.”

Lavigne also discussed the lack of evacuation routes in St. James, a problem her organization has previously raised concerns over. “Our community still doesn’t have more than one way in and out,” she said, adding that there’s still “no proper evacuation route, though we fought for it when we fought against the Bayou Bridge pipeline.”

Lavigne’s brother Milton, who is disabled, cannot leave his home because of a tree blocking a driveway, Lavigne said.

Ida’s rapid intensification was fueled by unusually warm waters in the Gulf of Mexico. “The extra heat acted as fuel for the storm. Heat is energy, and hurricanes with more energy have faster wind speeds and larger storm surges. As the Earth heats up, rapidly intensifying major hurricanes like Ida are more likely to occur, scientists say,” NPR reported. “The trend is particularly apparent for storms in the Atlantic Ocean, which includes storms like Ida that travel over the warm, shallow water of the Caribbean sea. A 2019 study found that hurricanes that form in the Atlantic are more likely to get very powerful very quickly.”

A significant chunk of the United State’s oil and gas infrastructure is located along the Gulf Coast, where hurricanes are prone to strike.

“This is another reason Formosa must not be built,” Lavigne said, referring to a proposed multi-billion-dollar plastics plant that she has organized against via RISE St. James. That plant, if built, would add 13 million tons of planet-warming, hurricane-intensifying greenhouse gases a year to the atmosphere, in addition to toxic air pollutants and carcinogens. United Nations human rights experts have condemned further petrochemical development in this largely Black region as “environmental racism.”

“The River Parishes is a textbook example of not a pandemic but a syndemic, when two or more concurrent epidemics or community issues come together within the same population,” Gary C. Watson, Jr., a media and business consultant affiliated with RISE St. James, told DeSmog, referring to the parishes surrounding the Mississippi River.

But for the moment, recovery from Ida presents its own demands in St. James and across southern Louisiana.

“It is really bad here,” Lavigne said, “and we are going to need a lot of help.”