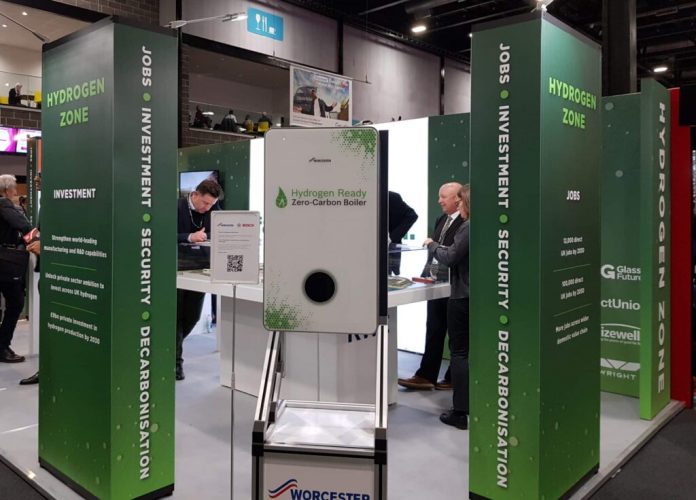 LIVERPOOL, UK – Gas companies and hydrogen lobbyists are using the Labour Party’s annual conference to push “false solutions to the climate crisis”, according to green campaigners.

Labour has made climate and energy its central policy agenda, and its conference in Liverpool this week has touted the slogan “A Fairer, Greener Future”. However, the hydrogen industry has had an outsized presence at the event compared to cleaner alternatives.

Industry figures used the panels, attended by DeSmog, to promote hydrogen as a catch-all solution to the UK’s low-carbon transition. But climate and clean energy campaigners worry that hydrogen is an expensive and inefficient solution to energy needs such as home heating when compared to green alternatives like wind, solar and heat pumps. They contend that gas companies, which have lobbied hard for hydrogen, are prioritizing their profits over cutting greenhouse gas pollution.

“It’s a worrying sign that they are targeting politicians who should be setting an ambitious green agenda, and who it is vital do not fall for industry greenwash.”

The Labour Party’s climate and energy policy proposals, released this week, feature expansion of hydrogen as a replacement for methane gas, alongside nuclear and tidal energy. The party is also calling for huge capacity increases in solar as well as onshore and offshore wind, though these industries had a much smaller presence at the conference.

Labour’s embrace of hydrogen comes as a study released this week by energy analysts Cornwall Insight estimated that hydrogen could increase energy bills by around 70 percent. A separate review of 32 hydrogen studies, published this week in the peer-reviewed journal Joule, concludes that “hydrogen use for domestic heating is less economic, less efficient, more resource intensive” than several low- and no-carbon alternatives, and “associated with larger environmental impacts.”

Visitors to the conference’s hydrogen pavillion – one of the largest in the exhibition hall – were greeted by a huge lit-up sign with a quote from shadow chancellor Rachel Reeves that reads: “I’m a massive fan of hydrogen”. A leaflet features supportive quotes from other Labour politicians.

British Gas owner Centrica has a display in the zone, which also includes a “hydrogen ready boiler” manufactured by Worcester Bosch. Earlier this month, DeSmog reported on concerns that hydrogen ready boilers are little more than “greenwashed” gas boilers, as they are likely to run on natural gas for their lifetime.

“Amidst the glossy brochures and expensive stalls at conference, we hope politicians are asking who all this really benefits,” said Juliet Phillips, a senior policy advisor at think tank E3G.

At a Monday panel titled “Green gas? Making the hydrogen economy a reality”, Dr Tony Ballance, Cadent’s director of strategy and regulation, advocated for hydrogen over green power sources as key to a stable low-carbon energy supply. The UK would need “gas-fired capacity” to back up batteries, he said, “in those periods when you don’t have the solar and you don’t have the wind”.

The panel was sponsored by Cadent and right-leaning Labour group Bright Blue.

Dr Ballance, who described himself as “a passionate environmentalist”, also cast doubt on heat pumps, citing a study by trade association the Energy Utilities Alliance which he claimed “shows that heat pumps are unlikely to work in properties of around 37 to 50 percent, so a good chunk of properties”, adding that “heat pumps have very high up front costs”.

Dr Ballance also described “blue hydrogen” – which is made using natural gas in a process that involves capturing the methane’s carbon dioxide emissions – would be “hugely important for decarbonisation” as power generators made the long term switch  to “green hydrogen”, which is made using solar and wind.

However, when asked by DeSmog, he was unable to say when Cadent’s grid would be wholly powered by green hydrogen, adding: “It’s really difficult to give you a date”.

Speaking on a panel titled “What do we need to do to make hydrogen a reality?”, Hydrogen UK CEO Clare Jackson  called for speedy investment in hydrogen, urging industry and government not to “take our foot off the gas”.

The panel was hosted by the industry-funded Hydrogen APPG. When DeSmog asked Ms Jackson why investment in fossil-fuel produced blue hydrogen made sense given the urgent need to slash carbon pollution, her answer was that “it’s not really about the production, I think it’s purely about emissions”.

The government’s low carbon hydrogen standard means “only hydrogen that meets that emissions standards and is done well will be able to play a part in our low carbon economy”, she said. “I think that’s probably the best technology agnostic way of ensuring that the hydrogen that we’re using is genuinely low carbon”.

Panelist Melanie Taylor, head of stakeholder relations at Northern Gas Networks, praised trials of “hydrogen blend” boilers, because the technology “doesn’t require anybody to make any changes in the home”.

Gas companies are keen to promote hydrogen for heating homes because it can be combined with gas and flows through existing gas infrastructure. Hydrogen blend boilers can operate on a fuel mixture of 20 percent hydrogen and 80 percent methane.

When DeSmog pointed out that replacing just a fifth of the fuel’s methane with hydrogen would do little to reduce carbon emissions, she agreed: “Blending isn’t an end point, you’re right. You wouldn’t blend and then say, ‘That’s it, problem solved’.”

‘Not Viable for Home Heating’

Labour shadow minister for Green New Deal and Energy Alan Whitehead, who chaired the panel,  followed up Jackson and Taylor’s comments by emphasizing the party’s commitment to clean energy: “I want to make very clear that whether we are on a trajectory which requires some blue to come in – and it has to be blue and not grey – then it’s very much a transition [to an] overwhelmingly green hydrogen process”

Grey hydrogen is made using natural gas and does not aim to capture and bury its carbon emissions.

David Cowdrey, director of external affairs at the independent renewable energy charity MCS Charitable Foundation, which commissioned the Cornwall Insight study, told DeSmog: “The evidence from independent researchers and industry experts clearly shows that while there will be a role for green hydrogen in industry and transport, it is not effective or viable for home heating.

“Heat pumps are the most efficient form of home heating, and unlike hydrogen are zero-carbon at the point of use,” he said.“Politicians must not listen to the false claims that hydrogen is a silver bullet for heating our homes.The hydrogen hype cannot be allowed to distract from the immediate and urgent task of insulating the UK’s leaky houses and electrifying our heating [using heat pumps].”

“Hydrogen will have a role to play in reaching net zero,” said E3G’s Juliet Phillips, “but we hope that decision makers are listening to the science and economics – rather than the lobbyists – regarding where it makes sense, and where it doesn’t.”