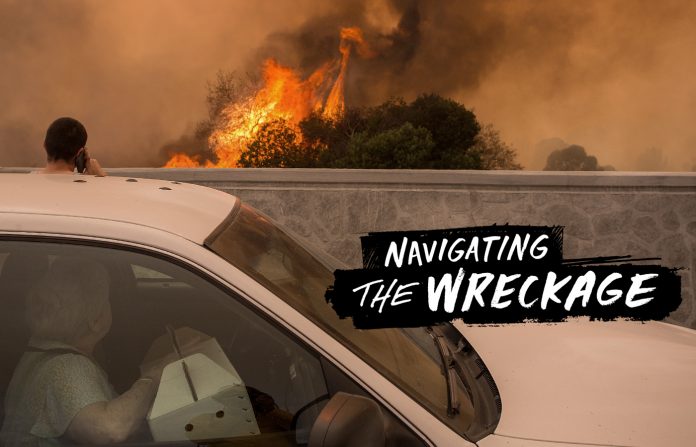 The mundane days all run together. But those days when I was genuinely unsure if I would make it to the end of my shift intact are the ones that stand out.

I remember fighting a fire on the Angeles National Forest in 2002. Our crew flew onto a ridge in a helicopter. The rotor wash, or wind created by the helicopter blades, flung orange embers into the unburned vegetation — the “green.” Immediately, it started burning.

We jumped out of the helicopter, ran underneath the fire and started digging. The goal was to quickly create a line free of any vegetation that could burn, called a fireline, which we used to stop fires from growing. Digging fireline is grueling; I often lost myself in the sound of chainsaws and rhythm of my tool hitting the dirt and ignored my physical pain.

Some of us had to run deep into the green and find embers or put out new small fires before they began burning out of control. There were full minutes when I thought, this may be it. We may not make it.

I worked as a woman wildland firefighter for seven years in the 2000s. And so I’ve been watching the smoky footage on my computer of the fires burning across the West this last month with great unease. Take the La Tuna Fire, which ignited on September 1. It was one of the largest fires Los Angeles has ever seen and burned more than 7,000 acres before it was contained. And it’s the kind of fire that is increasingly common in the age of climate change.

Wildland firefighters are especially attuned to how climate change puts us all at greater risk for destructive fires. We understand how higher temperatures and long-term drought are the perfect conditions for ignition. To us, there’s little controversy that it’s happening, although not everyone believes it’s human caused. I do, and, along with others in the field, I wonder when those in power will take the steps needed to address climate change.

Climate change and wildfires are a vicious cycle of worsening conditions

Last week’s La Tuna Fire in Los Angeles was, I’m sure, one of those fires that seemed uncontainable. In a speech, Ralph Terrazas, the LAFD fire chief, said, “We can handle everything. We have to. We don’t have an option.” He sounded exhausted and less hopeful than his words.

Luckily temperatures lowered. But Southern California’s real fire season hasn’t even started yet. Hot, strong winds called the Santa Ana blow through in late September and October, often resulting in unruly fires. I witnessed this. Fires often started on roadsides, ignited by discarded cigarette butts or even a spark from a motorcycle. The La Tuna Fire doesn’t bode well for this year’s Southern California fire season.

A couple days ago I spoke with my friend Jesse Moreng, an ex-hotshot — or wildland firefighter — who now works as a multi mission aircraft manager, mapping fires for the firefighters on the ground. When I asked Jesse if he thought this fire season was more severe than most, he said yes, “just in terms of how many places are burning at once.”

The US Fire Service and Department of the Interior have reported spending more than $2.1 billion on fires this year so far, which is what they spent for the entire fire season in 2015, one of the most devastating fire seasons since 1960. What strikes me most about the report is the predicted length the 2017 fire season. Some predicted containment dates are well into late Autumn. Many of these large fires are under 5 percent contained, with no rain or helpful weather in sight. That’s going to take a lot of resources to stop or contain.

As some fires continue to get worse, air quality will suffer, and more often there may be loss of property and loss of life due to the increasing number of people who live in wooded areas. Most importantly, large fires themselves emit greenhouse gasses, which have been proven to accelerate climate change and burn trees, which are crucial for oxygenating the air. This will inevitably affect the quality of life of most people living in the United States. This isn’t just happening here, but around the world.

As Hurricanes Harvey and Irma wreak havoc on Texas, the Caribbean, and Florida, there seems to be an Armageddon-esque dread floating around on the internet. La Tuna was contained quickly due to the lower temps I mentioned earlier, but there are still 62 fires burning across nine states across the West. It will only get worse as the effects of climate change continue.

Climate change will continue to affect fire behavior. According to an article published in PNAS, data from Western North America confirms that human-caused climate change will lead to widespread and more frequent fires. This is because the continual warming trend sets up conditions for a longer burning season — climate change means higher temperatures and more erratic precipitation, which leads to drier fuels ripe for burning.

It’s not hopeless. Although the wildfire news makes it feel as if the end of the world is upon us, it isn’t. Not yet. The USFS motto is “Caring for the land and serving people.” But how can we enforce that when the current administration denies climate change altogether? To keep our forests and air healthy we must be actively educating ourselves and voting for people who will be stewards of the land.

The grueling work of fighting fires

When I was 19, I dropped out of college and a friend suggested I apply at a nearby fire contracting agency in Eugene, Oregon. We were on a fire within two weeks and I loved the job. It was intense and exhausting, but I loved the camaraderie I had with my fellow crew members.

For four years I worked on three different hotshot crews. Hotshots are on the front lines — a crew consists of 18 to 22 members, the bulk of which are seasonal federal employees and the rest permanent government employees.

It’s intensely physical work. The fire season typically lasts May through October, and in a busy season a crew will log over a thousand hours of overtime. On “rolls,” a crew leaves home base for two to three weeks at a time, depending on the fire situation nationally, and will only come home for a couple days before being called out again. Every few years some crews have a slow season, resulting in less pay. Each hotshot gets paid differently due to experience, but most are paid $13 to $17 an hour, plus overtime and hazard pay.

Wildland firefighters are also often looked down upon by city fire departments. We aren’t considered “real” firefighters and seasonals don’t get benefits such as health insurance or retirement that structural firefighters enjoy. A permanent position is not guaranteed and can be hard to find.

In 2002, my crew was called to the Biscuit Fire, historically one of the largest fires in Oregon. It clocked in at over 500,000 acres, or 781 square miles. We spent most of our time fighting the Biscuit Fire using a method called “burning,” using drip torches to burn fuels along old logging roads and new dozer lines. We hoped that when the larger fire reached the burned fuels, it would stop, because there was no more fuel to burn. We spent three weeks fighting the Biscuit Fire. Eventually it crossed the border into California. The fire would not be contained fully for another five months.

Burning, which also can be done using flares or dropping napalm balls from helicopters, is just one method of fighting fire. Another method is fireline, which is when a fire crew or dozer creates a fuel break by removing all vegetation along the edge of the fire so it can burn no further. There’s also the “slurry line” method, where planes and/or helicopters drop fire retardant in a line across the vegetation to slow the burn.

For any of these methods to work, the elements have to be cooperative. Often they aren’t, and firefighters spend weeks implementing these tactics repeatedly, starting over each time they fail. We could only do so much.

Big fires are often unwilling to be contained. One day, while on the Bitterroot Complex, which burned more than 350,000 acres, we were feeling around for embers hiding in roots and stumps when it began to snow. My boss told me stories about how, when the snowy season came, embers would hide for the entire winter underground, only to pop up in the spring and reignite.

Even if we thought we’d have a hard time getting hold of the fire, we worked hard. After the initial frenzy of a new fire, our shifts were pretty regular: 16 hours on the fireline every day. We woke around 5 am and refilled our water, ate, and sharpened our tools in the dark, using the yellow circle of our headlamps. Throughout the day we’d lag and then become reenergized; we’d pour Emergen-C into our mouths, eat crystallized coffee, make tea with the water in our water bottles which was almost always hot.

Sometimes I hated the job; I’d dream of going to a restaurant and eating a steak, taking a shower — something we rarely did while in the field — sleeping in my bed. I wished, sometimes, that I could go swimming in a lake or do other summer activities I often missed out on during fire season. But firefighting was what I knew how to do, so I stayed. I loved working in the woods, where I didn’t have to be part of what I called “real civilization.”

There’s a part of me that misses my days of firefighting. But when I see the ongoing fires in California, Oregon, and Montana, I think about just how intense it was, and how much worse it’s getting every year. There will always be men and women at the forefront of these fires, doing whatever they can to contain the devastating impacts of nature. The politicians in charge of climate change policies need to make these hotshots’ jobs a little easier.

Anastasia Selby grew up in Washington state and spent most of her 20s fighting forest fires. She is now an MFA candidate in fiction at Syracuse University, and looks forward to graduation in 2018, when she can head out West again. Follow her on Twitter here.

First Person is Vox’s home for compelling, provocative narrative essays. Do you have a story to share? Read our submission guidelines, and pitch us at firstperson@vox.com.