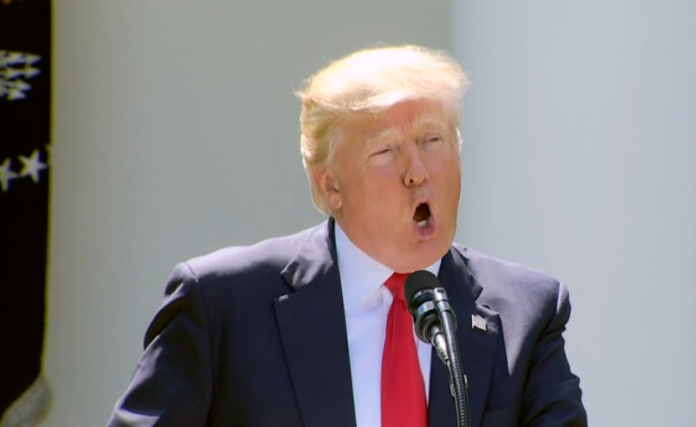 By pulling the United States out of the Paris climate agreement, President Donald Trump has rolled a pair of dice, with high stakes for America’s economic future and the welfare of the whole world.

First, he’s betting on a domestic energy policy that strongly favors increased production of fossil fuels. “I don’t want anything to get in our way,” he declared.

Second, he’s betting—at least so he said in his speech on Thursday afternoon in the White House Rose Garden—that the rest of the world will come back to the bargaining table for a new deal. (“If we can’t, that’s fine,” he shrugged.)

Either bet could go wrong. Missed opportunities in the emerging green economy could end up outweighing any short-term gains from fossil fuels. Today’s fossil fuels could even end up as stranded assets if the rest of the world does hold firm and weans itself off them.

“The United States will withdraw from the Paris climate accord,” Trump proclaimed in an unapologetic speech that was a ringing endorsement of the most radical climate naysayers among his supporters. “As of today, the United States will cease all implementation of the non-binding Paris accord and the draconian financial and economic burdens the agreement imposes on our country.”

The biggest risk of all, though, is that backsliding by the United States could quickly lock in a prolonged and dangerous warming. That would be especially likely if other nations follow Trump out of the global pact.

“This is a huge gamble,” said Nathaniel Keohane, vice president of global climate programming at the Environmental Defense Fund. “We know the longer we wait to act, the more expensive it will be and the more drastic measures we’ll have to take to avert the worst impacts of climate change. So walking backwards on climate just when the rest of the world has committed to move forward is a huge gamble.”

Advocates of the Paris Agreement were left hoping that market forces, popular opinion, global actions, and efforts by U.S. cities, states and corporations will all contribute enough to offset the loss of momentum as the federal government abandons the field.

White House officials, in calls and documents briefing Congressional staff, lobbyists and journalists, said that the formal process of leaving the agreement would take up to four years. But in the meantime, Trump said, the United States would not be bound by any of the treaty’s obligations. In particular, he said, the U.S. would not attempt to adhere to its Paris pledge, known as a “nationally determined contribution” because it is voluntary.

Nor would it give any more money to the international Green Climate Fund, designed to help poor countries cut their emissions and adapt to climate changes. Trump derided the fund—”nice name,” he said sarcastically—as a redistribution of wealth that America could ill afford. White House talking points obtained by Politico called it a “slush fund.”

The tone of his remarks was at times defiant, at times mocking of the pact and its supporters. The dominant chord was resentful, like a dirge for the most-picked-upon nation on the planet, not the most powerful.

It played to his coal-country base, as when he talked of his love for coal miners, or pledged to put Pittsburgh before Paris. And it seemed to little matter that Pittsburgh, a city that has worked hard to develop a reputation as a technology hub in the past decade, has less than 1 percent of its workers employed in the mining sector and only 7 percent in manufacturing. In fact, the mayor of Pittsburgh promptly came out in favor of the Paris Agreement on Twitter.

Above all, Trump said, he was simply fulfilling a campaign promise.

He spoke to a handpicked audience of supporters from government, industry and climate-denial think tanks, even as noisy protesters began to assemble in the park on the other side of the White House.

His decision came after weeks of internal tussling among his advisers, but it has been clear for a long time that Trump had no intention of fulfilling the Paris promises—he has embarked on a comprehensive repudiation of practically every federal policy aimed at reducing emissions, whether under the Clean Power Plan for electric utilities or countless other initiatives of the Obama administration.

The problem isn’t so much that Trump’s unilateral action will abruptly derail global progress toward rapidly eliminating carbon dioxide emissions from fossil fuels, the central goal of Paris. As the prominent consulting firm Wood Mackenzie told Carbon Brief, it is “unlikely to materially alter the prospects for fossil fuel demand growth,” since renewables, energy efficiency and other decarbonization trends are largely driven by market forces.

Rather, a retreat by the U.S. could choke off the acceleration of the shift to cleaner fuels that the Paris negotiators built into the agreement, which sends powerful signals to the private sector.  It’s urgent that this transformation occur quickly, as the world is just a few years from busting the carbon emissions budget for a safe climate—a limit based neither on politics nor willpower, but on science.

Without higher ambition, according to the United Nations’ latest annual “gap report,” the world is “on track for global warming of up to 3.4 degrees Celsius. Current commitments will reduce emissions by no more than a third of the levels required.”

Just this week, the federal climate agency NOAA issued its annual report on greenhouse gas concentrations in the atmosphere, data that has been showing an alarming acceleration of the crisis.

In his speech, Trump asserted incorrectly that the amount of warming the treaty would prevent was “a tiny, tiny amount,” and he made no concession to the science that stands behind its goals or the global consensus supporting climate action.

According to an analysis by Climate Interactive, a nonprofit that runs climate simulations, the pledge the U.S. made at Paris was big enough to account for more than one-fifth of all the emissions expected to be avoided under the treaty commitments.

For the United States to abandon its pledge means the world could warm an additional 0.3 degrees Celsius by the century’s end, the report found in a worst-case scenario.

According to an analysis released earlier this year, the laundry list of anti-climate and pro-drilling initiatives announced by the Trump administration by mid-March had already put effectively out of reach the U.S. pledge at Paris—a planned reduction of emissions by about 28 percent by 2020, from the levels of 2005.

Historically, the U.S. is the biggest greenhouse polluter of all. It surely would be challenging for the rest of the world to compensate for American backsliding. But it’s not entirely impossible.

Climate Action Tracker, a non-profit that specializes in modeling, forecast last month that China, the world’s top emitter, and India, the third-highest emitter of climate pollution, are on track to meet their climate pledges a few years ahead of schedule, and that this alone might be enough to offset the abdication of the United States.

European and Chinese diplomats, like other world leaders at the Group of Seven and at the UN, have spoken forcefully in favor of preserving the Paris Agreement. Today, at the start of a Sino-Euro summit, their draft communique pledged intensified action by China and the European Union no matter what Trump did. It called the Paris pact a “historic achievement” and “irreversible.”

A group representing large cities around the world has issued a new report saying that the long-term goals of Paris are still reachable if cities act in the next four years to reach a peak in greenhouse gas pollution and then cut average per-capita emissions nearly in half in the following ten years. But the report cautioned that this vision would cost $1 trillion in investments by 2050, including $375 billion to jump-start progress in the next four years, after which it would be too late.

“If all cities of 100,000 people or more act on the recommendations in the report, the world will achieve 40% of the emissions reductions necessary to avoid catastrophic climate change,” said the global group, known as C40 Cities. Dozens of U.S. mayors, organized by the Sierra Club, have promised to shift to renewable electricity in the coming decades.

In a statement, former President Barack Obama said, “The nations that remain in the Paris Agreement will be the nations that reap the benefits in jobs and industries created. I believe the United States should be at the front of the pack. But even in the absence of American leadership,” he said, “I’m confident that our states, cities, and businesses will step up and do even more to lead the way.”

But because the window on climate action is closing so fast, whether the world as a whole meets its goals may ultimately hinge on what the U.S. does, said Bill Hare, one of the leaders of Climate Action Tracker.

“What would the U.S. withdrawal from the Paris Agreement mean for the ability to keep temperatures well below 2 degrees? The answer depends on how long the U.S. is out of the game,” he said.