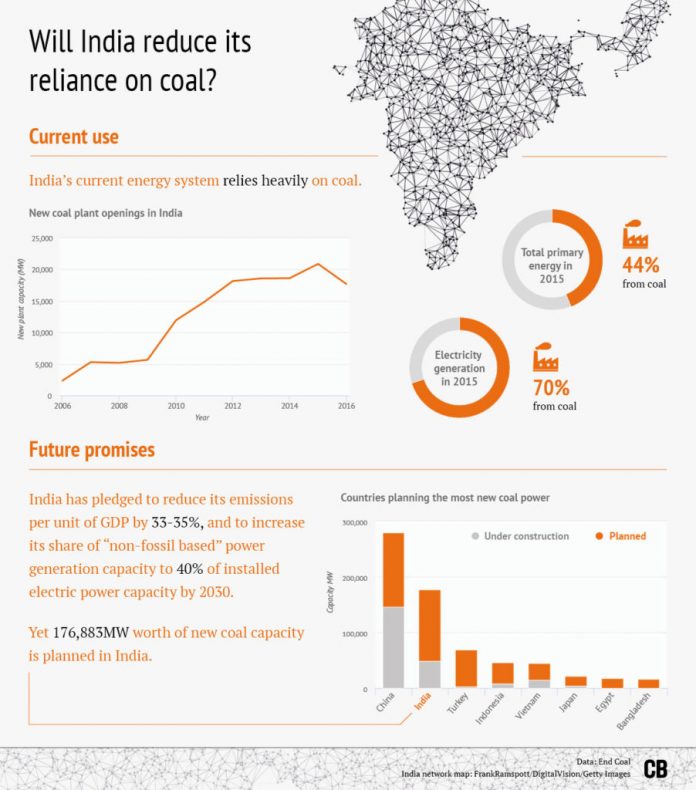 That’s the conclusion of a new paper, published in the American Geophysical Union journal Earth’s Future. These planned plants would increase Indian coal generating capacity by 123%. But there are signs that some may never get built, the paper notes.

Carbon Brief takes a look at the paper’s findings.

The authors use data collected by non-profit CoalSwarm on coal-fired power plants in India, with capacity of at least 30 megawatts (MW) that are either under construction or proposed, as of May 2016.

They apply a method of assessing “committed” CO2 emissions of power plants over their expected lifetimes. This gives an estimate of the lifetime emissions from India’s planned coal plants, which can then be compared with the country’s climate and energy targets, including its pledge, otherwise known as its Nationally Determined Contribution (NDC), submitted ahead of the Paris climate talks. 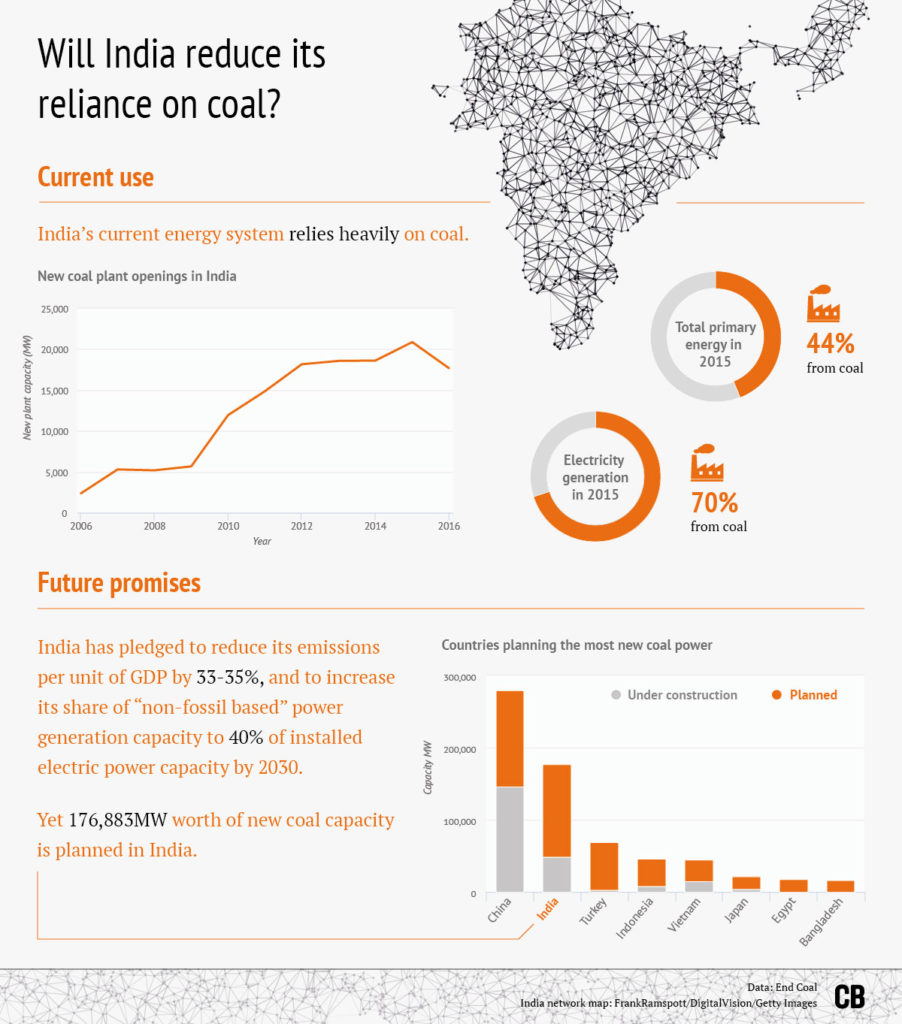 Will India reduce its reliance on coal? Infographic by Rosamund Pearce for Carbon Brief

India’s enormous coal reserves, estimated at 87 billion metric tonnes (Gt) have led to it being heavily dependent on coal, making up 63% of India’s electricity capacity in mid-2016, with 28% coming from low-carbon sources, including nuclear.

India’s NDC includes a pledge to reduce the overall emissions intensity of its economy 33-35% on 2005 levels by 2030.

The new analysis extends the economy-wide carbon intensity target to the power sector. This would give a 1.5Gt carbon budget for electricity generation in 2030, the paper suggests.

Another major pledge in India’s NDC is to ensure 40% of its installed electricity capacity is made up of low-carbon sources by 2030. Meeting this pledge, while also building the proposed coal plants, would mean overall electricity supply would far exceed the country’s projected future electricity demand.

The graph below shows how the planned low-carbon capacity, alongside current oil, gas and coal capacity, is sufficient to meet the country’s projected electricity demand to at least 2023. 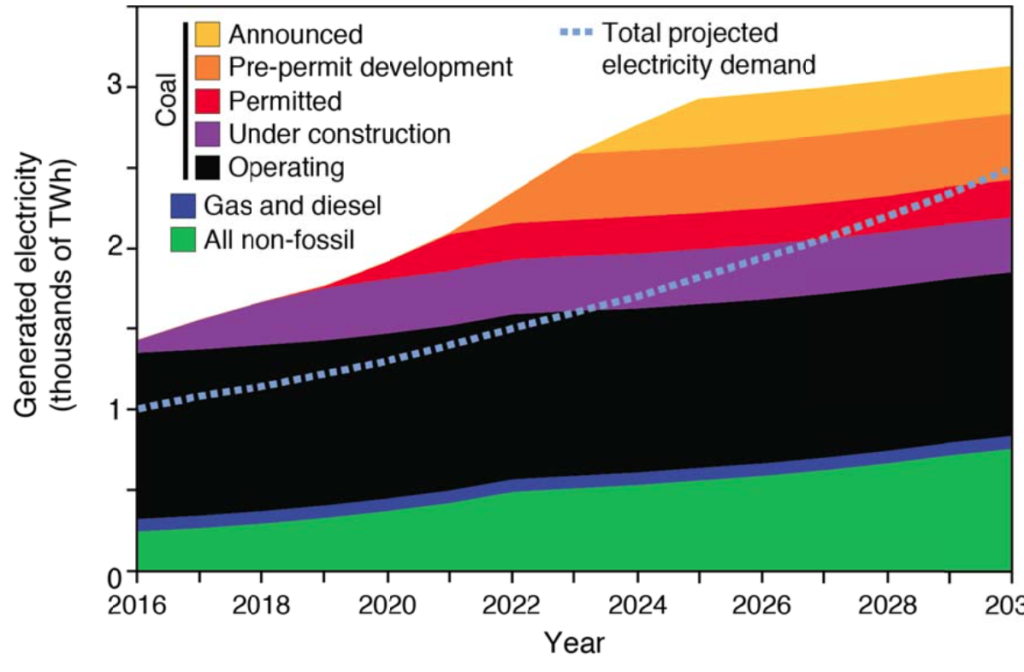 The coal plants already being built are not needed until at least 2024 – and even longer if India keeps building solar and wind past its 2022 goals.

Meanwhile, none of the coal plants in earlier stages of development are needed until at least 2030, assuming coal plants are operated at a 75% capacity factor.

If the proposed plants were built and operated at an average capacity factor of 45%, then all but 14GW of the proposed plants could be used. However, this could lead to billions of dollars’ worth of “stranded assets” in redundant or underused plant, the report suggests. Income from producing the same amount of electricity would be spread across more plants, each with costs due to construction, fuel use, operations and maintenance.

Could India blow the Paris goal?

Researchers say India’s NDC is itself not in line with the international goal of limiting warming to below 2C.

One study found the combined emission pledges of the EU, the US, China and India left no room at all for other countries to emit CO2 if global temperatures are to be limited to below 2C.

Even allowing a “fair” carbon budget for India’s rising population and relative need for economic growth would mean emissions need to decline by 2030, the study said, while for 1.5C, reductions in India would have to begin immediately.

The scale of the disconnect between the Paris goals and current climate pledges is illustrated by India’s current coal plans.

Yesterday’s new research shows India’s planned coal plants would almost single-handedly jeopardise the 1.5C target, says Steven Davis, associate professor of Earth system science at University of California, Irvine and co-author of the new study. Proposed coal plants and those currently under construction would together emit around 83 GtCO2 by 2065, the paper shows – which is more than half of the remaining carbon budget for 1.5C of just 162 GtCO2.

Part of issue, David says, is that the people participating in climate negotiations aren’t the same ones that are permitting new power plants in the country.

Previous analysis by CoalSwarm has shown that cumulative emissions from the world’s current and proposed coal plants would push the global carbon budget well beyond both the 1.5C and 2C targets.

For now, however, it remains unclear whether India’s proposed coal plants will indeed be built, with precedents set by the Indian government in recent years indicating many of them may never go ahead.

The number of new coal plants built in India has skyrocketed since 2007, when the government put a number of policies into place to speed up expansion, including opening the market to private companies.

It is important to note that while 261GW of coal-fired capacity was finished between 2010 and May 2016, a further 431GW of planned capacity was either shelved or cancelled during the same period. This leaves an overall implementation rate of just 38%.

Coal plants are cancelled for a variety of reasons, including financial issues, difficulty in securing coal supply, lack of power demand from electricity distribution companies, and difficulties in acquiring permitting due to community resistance, the paper says.

Behind the trend, however, is a broader shift towards renewables, says Shearer. She tells Carbon Brief:

“The coal projects now in progress are a vestige of earlier economic and political conditions, when coal power was inexpensive relative to renewables and government policy was strongly encouraging a swift ramp-up in power capacity. So what we are seeing now is a continuation of past trends bumping up against a new reality, as technologies like solar and wind are becoming cheaper and more competitive.”

“We see companies continue proposing and promoting new coal plants and mines because that is what they have done in the past, even if the demand for new coal is not there.”

The Indian government has also indicated that few if any new coal plants are needed for the next decade. Its recent draft National Electricity Plan, released in December 2016 and covering the next two five year periods to 2027, implied no new coal-fired power stations beyond those already under construction were likely to be required to meet Indian energy needs in this period.

It also called for 57% of the country’s power capacity to be non-fossil by 2027, a far more ambitious target than was set by its NDC. However, it failed to address what the government will do about the 178 GW of proposed coal plants.

In April 2016, meanwhile, India’s Ministry of Power said that developers should “back off” the development of new coal plants for the next three years, but did not outright restrict new permits or builds.

According to Shearer, the real shift is coming due to rapid reallocation of financing away from coal – as demonstrated by the 31 coal plants frozen in mid-construction in late 2016.

However, while the IEA has said it makes “no real economic sense” to build more coal plants in China, it also projected last year a strong growth in demand in India and southeast Asia up to 2020.

Yesterday’s research offers reasons to temper this projection, making clear that India cannot pursue coal at all costs if it wants to meet its Paris climate pledge. Moreover, the Indian government’s latest plans would raise low-carbon’s share of power capacity, implying an even less coal-intensive trajectory.