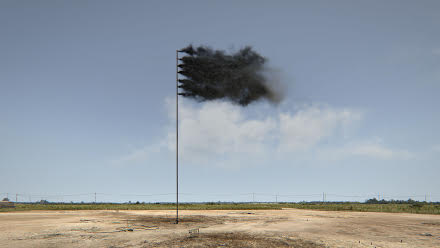 Irish artist John Gerrard has created a major piece of work to coincide with Earth Day 2017.

Commissioned by Channel 4 for Somerset House, London, the piece, entitled Western Flag (Spindletop, Texas) 2017, consists of a virtual simulation of a flag formed of thick black smoke on the site of the ‘Lucas Gusher’ in Spindletop, Texas – the world’s first major oil find.

According to the artist, the piece stands as a symbol of climate change and modern society’s dependance on oil.

The work is presented on a giant LED screen in the Edmond J. Safra Fountain Court, Somerset House, and will also interrupt Channel 4’s regular transmissions during World Earth Day.

The site of Spindletop, Texas is considered to be the birthplace of the modern oil industry. The site is digitally recreated by Gerrard as it stands today, barren and unpopulated. It parallels precisely the sunrises, sunsets and shadows of the real-life Spindletop site, so visitors can view the changing Texan landscape in real-time.

“One of the greatest legacies of the 20th century is not just population explosion or better living standards but vastly raised carbon dioxide levels in the atmosphere. This flag gives this invisible gas, this international risk, an image, a way to represent itself.”  – John Gerrard 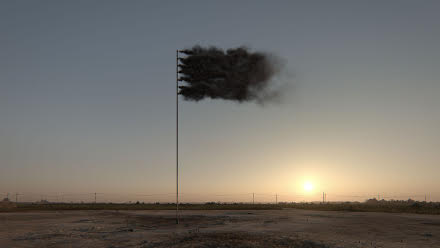 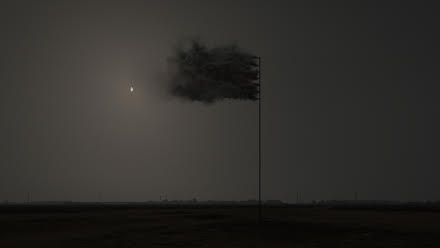 It is on view at Somerset House, London, from 7am-11pm from 21st – 27th April, and will interrupt Channel 4’s regular transmissions for 24 hours on Channel 4 from 9pm, 22nd April until 9pm, 23rd April. The work will also play continuously on the channel’s website at all4.com/westernflag.

For more information on Gerrard’s work, see his website www.johngerrard.net 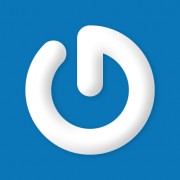 Wealthiest homeowners most at risk of wildfire hazard

People must be ‘heart’ of climate action