Home News ClimateHome Kenya’s food crisis: ‘With this kind of farming, I only make a... 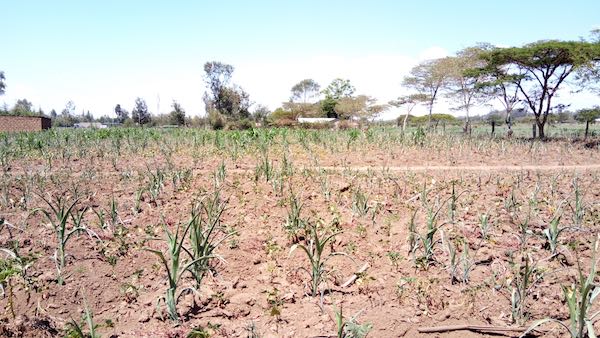 It is 9am in the morning in Ingbor village in Nakuru Rift Valley, Kenya. The sun is already high up. Wind whips dust into the eyes as the temperature soars. There is no sign of rain.

James Kipkoech, a 56-year-old maize farmer, stands outside a welding and fabrication workshop with a green notebook, ready to take down stock and instruct his workers on the day’s jobs.

He barely bothers with farming these days. Unpredictable rainfall means this welding and fabrication workshop is his lifeline. “With this kind of farming, I only make a loss,” Kipkoech says. “Maize dried up in the farm and I have used a lot of money, so I prefer this business because it pays me well.”

His store, once full of sacks of maize, is now used to store scrap metal. Kipkoech regrets the money he invested in farming, while maize production costs sky rocketed. He spent Ksh 30,000 ($288.74) on seeds, fertilisers and labor. Pointing at the dried maize plants on his farm, he says he cannot plan for the next season.

“Last year, maize did very well, in one acre I harvested about 40 sacks of maize. But this year I am experiencing a loss and even if it rains, I can’t plant it again because am not sure whether the rain will continue,” he says.

The long rains (what Kenyans call the March-June wet season) of 2017 were generally poor over most parts of the country, according to a review by Kenya’s meteorological department. The Kenyan Ministry of Agriculture’s prediction for this year’s harvest – 32m bags – is now 20% less than had been initially projected and 5.1m bags less than last year’s harvest.

For the past five years, the east African region has been experiencing continuous droughts and crop failures. Ethiopia, Kenya, Somalia and Uganda are worst affected. Farms have failed across the regions, leading to food insecurity and high food prices.

In Kenya, the annual food inflation rate is 18.6%. Climate Home also reports today on the political instability this has caused as opposition parties blame the government’s management of the crisis.

Farmers are hit on both sides. As they abandon once-productive farms they lose a stable income. Meanwhile the price of food soars.

Tony Kirui, a 28-year-old Ingbor farmer and father of two children, says his maize dried up leaving him hopeless. “I struggled to get fertilisers, seeds and ploughed my farm spending all the money I had. But now there is nothing on the farm,” he says.

There are hardly any casual jobs at the farms around as economic activity has ground to a halt. This forced him to go for construction jobs where he gets Ksh 500 ($4.81) per day, which he says it is not enough to feed his family.

“I don’t get work anymore, there is no maize. We buy at Ksh 120 ($1.16) per 2Kg. I left farming for casual jobs at construction sites. The money is not enough but it’s better you’re sure you have something to buy food for the family,” he says.

Dr Stephen N Mugo, principal scientist working with the International Centre for Maize and Wheat Improvement (CIMMYT), a nonprofit research organisation based in Nairobi, says maize is an important food security crop in Africa. It is grown by 280 million people who harvest approximately 33m hectares per year.

Analysis: Scientists say east Africa will get wetter, so why is it drying out?

Mugo says CIMMYT are making efforts to address the challenges facing maize farmers. “Our research addresses stresses that are experienced by farmers, especially small scale farmers who have problems with low soil fertility, low access to nitrogen. We make them maize that is more efficient in using low nitrogen, drought resistant and produces higher yields.”

He says implementing improved farming systems among small scale farmers alongside improved maize breeds could increased yield by one tonne per acre. This could increase Africa’s maize harvest by 33 million tonnes.

But some farmers have left maize behind for good. Diana Wongoi, a 56-year-old mother and a neighbour to Kipkoech, says she abandoned maize farming after she experienced a loss in three consecutive years.

“After putting all the money in maize farming, sometimes you sell a cow, goats or the remaining bags of maize to buy fertilisers and seeds then drought comes and destroys it. So for me I gave up and started horticulture farming which gives me good returns,” she says.

A problem solved for Wongoi, but Kenya’s maize shortage only gets worse.