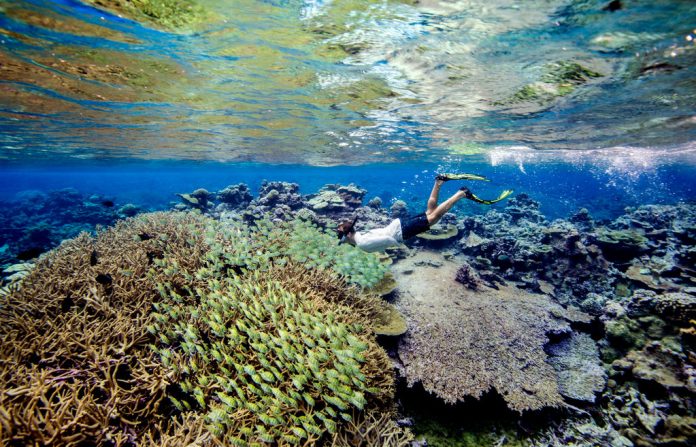 HONOLULU — Terry Kerby has been piloting deep-sea submarines for four decades, but nothing prepared him for the devastation he observed recently on several underwater mountains called seamounts in the middle of the Pacific Ocean.

“It was a biological desert,” he said. Where normally fish and crabs dart about forests of coral and sponges, “all we could can see was a parking lot full of nets and lines, with no life at all.”

Mr. Kerby and Brendan Roark, a geographer at Texas A&M University, are comparing seamounts that have been fished to those in pristine, protected areas. This month, they surveyed the upper reaches of four seamounts, one of which, Hancock, lies inside Papahānaumokuākea Marine National Monument, which includes the Northwestern Hawaiian Islands.

They knew that the seamounts had been fished by trawlers and coral harvesters at some point. “But the extent of the devastation and the huge amount of gear that was abandoned on the bottom were shocking for both of us,” he said.

Among the casualties littering the seabed were 10-foot-tall black corals that can live over 4,000 years, among the oldest forms of life on earth.

“Allowing fishing in the few protected seamounts left would be a huge mistake,” said Dr. Roark.

The shore reefs of the islands have long been protected from commercial fishing; the monument designations extended that protection to 50 miles from shore in some cases and 200 miles in others.

According to a memo obtained by The Washington Post in September, Interior Secretary Ryan Zinke has recommended that the designations of the Pacific Remote Islands and the Rose Atoll be amended “to allow commercial fishing.” (A similar recommendation was made for another marine monument, the Northeast Canyons and Seamounts, off the coast of New England.)

The memo did not mention the largest marine reserve: Papahānaumokuākea, a string of mostly uninhabited atolls and reefs that have been largely undisturbed since World War II. At about 583,000 square miles, it is the largest protected area on the planet. (Industry officials in Hawaii are pressing for commercial fishing to be allowed there, too.)

Many scientists see these marine reserves as among the last rich, untouched ecosystems where they can study the effects of climate change in isolation from the impacts of overfishing or pollution.

The fishing industry here in Hawaii sees it differently. A driving force behind the administration’s reconsideration is an obscure but powerful quasi-governmental organization called the Western Pacific Fishery Management Council, or Wespac, based in Honolulu. The council has jurisdiction over the waters where 140 long-line vessels based in Hawaii — as well as a handful in American Samoa — fish mostly for tuna and billfish.

Wespac has argued that limits on catch, gear and fishing seasons are the best tools to regulate fishing and to ensure that the Pacific yields the maximum sustainable harvests. Over the years, the council has strongly opposed the creation and expansions of each of the marine monuments.

This year, the council has embraced a new slogan: “Make America Great Again: Return U.S. fishermen to U.S. waters.” In a presentation to members of the other fisheries councils in February, Wespac officials claimed the marine monuments “curtailed economic growth” and “compromised national food security.”

Ray Hilborn, a fisheries expert at the University of Washington and a scientific adviser to Wespac, argues that tuna and billfish are highly migratory and travel in and out of the reserves. “The monuments just force the fishermen to go farther and spend more fuel to catch the same fish,” he said in an interview. “It’s a fake protection.”

Asked whether Wespac sought to reintroduce fishing only in monument waters or also in near-shore reefs, Kitty Simonds, the longtime executive director, said in an email that the council also would review “the management measures that were in place before the monument designation and may recommend changes.”

The fishing industry in Hawaii is hardly in trouble, several experts noted. Indeed, the Hawaii fleet’s bigeye tuna catch has doubled since 2006, even though half of America’s Pacific waters are now off-limits to fishing.

Robert Richmond, a marine ecologist at the University of Hawaii, pointed out that the Hawaii fleet filled its yearly quota of bigeye in August this year, “so they obviously don’t need more space to fish. They’re just against all protected areas on principle.”

Over 500 million people depend on reefs for protein, Dr. Richmond said, and they already yield far less than they could if they were sustainably fished. Reef ecosystems may become even less productive as the ocean gets warmer and more acidic.

Dr. Richmond and other scientists also took issue with Dr. Hilborn’s criticism of marine monuments. They say the reserves serve as havens for species depleted elsewhere and for populations migrating away from the Equator, where warming waters are lowering plankton density.

“The fisheries benefits of marine reserves are now beyond doubt,” Callum Roberts, a marine conservation biologist at the University of York, said in an email. “They allow fish populations to grow back and spill fish into surrounding waters, they pour fountains of offspring into ocean currents that seed fisheries, and they provide resilience to environmental shocks.”

The tools favored by fisheries officials target a few species to the neglect of others, he added, while “reserve benefits reach entire ecosystems.”

One of the islands on Mr. Zinke’s list is Palmyra, an atoll that lies 1,000 miles south of Hawaii and is part of the Pacific Remote Islands National Marine Monument. The Nature Conservancy has been running a marine lab there since 2005, the only site with housing and a runway for small aircraft located in one of the most untouched tropical marine ecosystems in the world.

With 170 inches of rain a year — compared with 37 in Seattle — Palmyra also has a dense rain forest where 11 species of seabirds nest. Discoveries made there include a surprising link between fish and seabirds: a study found that nesting birds’ droppings carried onto the reef by the rain stimulated plankton growth that attracted manta rays and other plankton feeders.

Other research has shown that the classic picture of a coral reef, with lots of pretty little fish and a few big ones, is entirely artificial. Palmyra’s reefs, like those in the other monuments, are dominated by sharks, snappers, jacks and other top predators, while smaller prey cower in fear in holes in the coral, a study found.

So interconnected are the elements of intact reef communities that allowing fishing just beyond 12 miles would disrupt the ecosystem, said Alan Friedlander, a marine ecologist at the University of Hawaii and chief scientist of the National Geographic Society’s Pristine Seas project.

“You need to keep the fishing as far away as possible, ideally at 200 miles,” said Dr. Friedlander.

Moreover, the remote locations are difficult to police. Many of the denizens of intact tropical reefs, like humphead parrotfish and wrasses, are worth thousands of dollars in Asia, said Dr. Richmond.

“Fishing them sustainably, as Wespac proposes, would mean traveling very long distances from Hawaii and taking very few fish,” he said. “It wouldn’t be economical.” Dr. Richmond predicted that fishing vessels “would poach the heck out of those islands.”

Daniel Pauly, a prominent fisheries scientist at the University of British Columbia, says that given a chance, the value of the bigger reserves like those around Wake and Johnston atolls and Jarvis Island, which extend to 200 miles offshore, will increase over time.

Research by Jonathan A. Mee, a fish geneticist at Mount Royal University in Calgary, Alberta, suggests that in any large marine reserve, some “lazy” fish will spend their whole lives inside the boundaries and therefore will not be caught — and the bigger the reserve, the more fish inside it will live longer.

This will raise the number of what scientists call B.O.F.F.s (Big Old Fecund Females), which produce more eggs and eggs of better quality, further increasing the density of fish inside the reserve. Dr. Mee believes that evolutionary selection of a putative “lazy” gene would accelerate the population growth inside a reserve.

“The bigger the mortality outside the reserve, the faster the population inside will grow,” Dr. Mee said in an interview.

This would be particularly helpful for bigeye tuna, which is the mainstay of the sushi market and the principal target of the Hawaii long-line fleet. The population of bigeye in the central and western Pacific is now estimated to be 16 percent of its original size.

“Technology and subsidies have allowed industrial fleets to go farther and farther, and deeper and deeper, and to deplete stock after stock,” said Dr. Pauly, who has shown that the global catch is steadily falling.

“The only thing standing between these fleets and global depletion are these big no-take reserves, so this is the time to create more, not to open up the existing ones to fishing.”

Alex David Rogers, a conservation biologist and seamount expert at Oxford University, estimated that worldwide there were about 16,000 seamounts with summits above 5,000 feet, shallow enough to harbor a rich diversity of fish and corals. Unfortunately, he said, most have already been fished.

Still, those seamounts in the Papahānaumokuākea and Pacific Remote Islands marine monuments remain mostly pristine, said Chris Yesson, an expert on ocean floors at the Zoological Society of London.

“Saving the ones in the American marine monuments is extremely important, because the NW Pacific is particularly rich in endemic corals and other marine life,” Dr. Rogers wrote in an email.

Paul Achitoff, managing attorney for Earthjustice’s mid-Pacific office in Honolulu, said many legal scholars had concluded that the Antiquities Act, which allows presidents to designate and protect monuments without congressional approval, is a one-way street.

“It does not allow presidents to remove restrictions or protections from a previously designated monument,” he said in an interview. “Only Congress can do that.”

He acknowledged that several presidents had changed monument boundaries and tweaked restrictions without court challenges.

That may change soon. “If any of the protections to the Pacific marine monuments are lifted, we will be filing lawsuits, and we expect to win,” Mr. Achitoff said.