This is a re-post from the Potsdam Institute for Climate Impact Research based on their press release about the new Inter-Sectoral Impacts Encyclopedia – ISIpedia for short.

Decision-makers on all levels are provided with a new tool to tackle the climate challenge. Data and explanations on global warming impacts – from floods to droughts – are made more accessible to the public by a team of 12 international research institutes. They recently launched the online portal ISIpedia which features science explained by the scientists, breaking down global studies to the country-level, for both adaptation and mitigation planning. 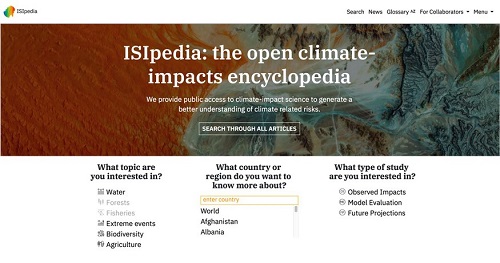 “Understanding the problem can be a powerful tool to help build a safe climate future for all,” says Katja Frieler, the ISIpedia project leader from the Potsdam Institute for Climate Impact Research. “We are all decision-makers on this topic and our decisions should ideally be based on an understanding of the problem and latest scientific findings. That is why on ISIpedia climate impact scientists not only provide easily accessible data, condensed in maps and graphs, and crucial country-level information derived from dissecting global studies but also an insight into the analyses themselves. On ISIpedia they tell about the research process, the methods they apply, what we do not know and what we know for sure.”

“ISIpedia will grow and mature,” says Frieler. “It is our aim to put the evidence on the table that citizens as well as businesses and policy-makers, can take best-informed decisions when it comes to acting on the climate crisis.”

From observed impacts to future projections

Articles on the new platform all fall into three categories: The first one is ‘Observed impacts’ and about questions such as ‘Is the reported increase in flood induced damages already induced by climate change?’. The second category is ‘Model evaluation’, i.e. the questions whether the tools to project climate impacts into the future are good enough. Are the crop-models for example able to reproduce the strong drop in maize yields that has been observed in the US at very high temperatures? The third category is ‘future projections’ and really about risks climate change will pose to natural systems and our societies.

ISIpedia makes climate impacts concrete on the country level. For example, policy makers and adaptation planners from Egypt can learn that, assuming a +2 °C warming level, their country is on top of the ranking of people exposed to river flooding. China, a top global emitter, is on rank 24 and hence also increasingly exposed.

The name ISIpedia is a short form for Inter-Sectoral Impacts Encyclopedia. It is based on research carried out under the Inter-sectoral Impact Model Intercomparison Project (ISIMIP) which is working with roughly 100 research groups worldwide. By systematically comparing the different computer simulations of climate impacts, the project is working towards consistent robust projections of climate change impacts across different sectors and scales. The ISIpedia portal is free, open-access and professional users can download the processed data used in the analyses as well as the raw data.

“To increase the usability of the climate impact assessments, our portal includes extensive information on how these assessments can be applied. For example, they are crucial for building a robust scientific basis in climate litigation cases or in evaluating the risks that climate change poses for the financial sector,” says Barbara Willaarts of IIASA, the International Institute for Applied Systems Analysis, one of the core partners.

Incorporating perspectives of potential users to reflect their needs in the design and development of the ISIpedia portal has been a key element in helping to maximize its practicability.

“We wanted to develop the portal in a participatory manner, gathering input from dialogues between climate modellers and potential users, including policy makers and practitioners,” says Inga Menke of Climate Analytics in Berlin, who led the stakeholder engagement team. “This helped us to build trust in the data behind the portal, build capacity in how to use the data, for example in national adaptation planning, while modellers gained a better understanding of what users need.”

The ISIpedia project is part of ERA4CS, an ERA-NET project initiated by JPI Climate with co-funding from the European Union (Grant number: 01LS1711A). The ISIpedia project is conducted by 12-member consortium led by the Potsdam Institute for Climate Impact Research (PIK). PIK coordinates the project and leads the scientific work based on ISIMIP model simulations and impact assessments. The Assessment and Editorial Team, based at the International Institute for Applied Systems Analysis (IIASA), leads the design and development of the ISIpedia website and the impact assessments. Climate Analytics houses the Stakeholder Engagement Team and leads the process to include user perspectives in the design of ISIpedia.

The project consortium consists of: