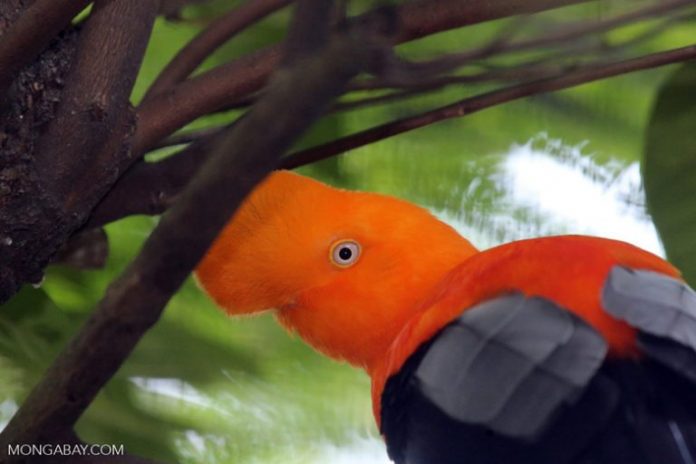 Yesterday The Leonardo Dicaprio Foundation unveiled an ambitious plan to protect and connect 50 percent of the world’s land area as part of a broader effort to curb global warming, stave off the global extinction crisis, and ensure food availability for the planet’s growing human population.

The first step of the “Safety Net” initiative is to identify the best opportunities to protect and restore ecosystems that underpin human well-being and sustain healthy wildlife populations. That means incorporating data on variables ranging from species richness to climate trends to deforestation rates for every point on Earth’s surface.

That task is being taken up by a consortium of groups led by RESOLVE, a Washington, D.C.-based nonprofit; Globaïa, a Canadian data visualization group; and Brazil’s Universidade Federal de Viçosa. Heading up the terrestrial mapping is Eric Dinerstein, a biologist who formerly served as chief scientist for WWF and now has the same role at RESOLVE.

Dinerstein answered questions about the Safety Net Map during a November 7, 2017 interview with Mongabay.com.

The cock-of-the-rock bird from South America’s Andes-Amazon region, an area that has the highest levels of biodiversity in the world. Photo by Rhett A. Butler

AN INTERVIEW WITH ERIK DINERSTEIN

What is the “safety net”?

Simply put, it’s a vision of the Earth in 2050 that provides enough arable land to feed 9.5 billion people while still allowing enough land for global conservation efforts to keep our biosphere alive and healthy. Scientists are calling for 50% of the land area of Earth to be protected in an interconnected way and 50% of the seas, too. As it turns out, reaching this target by 2050 is not only essential to solve the extinction crisis but it is also a vital piece to solving the climate crisis. Forests, wetlands, the oceans, and the permafrost layer need to be protected to absorb greenhouse gases or to not release any more dangerous emissions, all as part of any realistic chance of staying below the tipping point of a 2°C rise in temperature. The Safety Net is the first global effort to harmonize development with environmental protection. By 2050, we want a thriving, living biosphere and that won’t happen unless we align the Sustainable Development Goals (SDGs) with conservation. 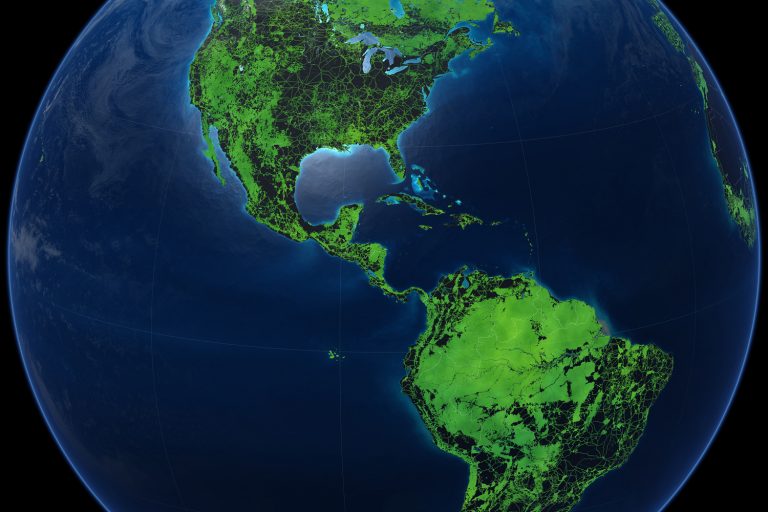 How are you prioritizing the best opportunities in terms of geographies and ecosystems?

We included many global mapping efforts to identify the most important reservoirs of nature. These data sets range in scale from areas with the most endangered vertebrates, known only from a single population—termed the Alliance for Zero Extinction sites, about 600 in total globally—to large landscapes that still harbor intact assemblages of large vertebrates—a rare feature today. An underlying biological principle that underpins our mapping effort is the recognition that most species on Earth are rare—by that we mean have a narrow geographic range, live at low population densities, or both. So the Safety Net has to account for all of them, too. Then at a higher spatial level, we need to conserve all of the rare habitats and ecosystems. For example, taken together, the 40 Mediterranean-climate ecoregions on Earth (out of a global total of 846 ecoregions) squeeze about 20% of the world’s 250,000 vascular plant species into a relatively small land area. Other rare habitats that cover limited geographic areas but contain a disproportionate number of unique species, physiological adaptations, or rare phenomena —tropical montane grasslands (called paramo in Latin America), temperate rain forests, tropical dry forests—our mapping effort highlights them, too.

One of the scientific advances of the Global Safety Net, I believe, is that we answer for the first time, what it would take to create corridors or linkages connecting every protected area on Earth and other important areas not yet protected. The corridors are a key feature of the mapping effort. The advantage of undertaking this analysis in the era of cloud computing is that we can re-examine some of our methods for designing corridors virtually on the fly and we can also make changes as better, regional data comes on line to replace our estimation. For example, those scientists who follow grizzly bears for a living may choose more feasible corridors than we have selected. That’s great! We’ll update the Safety Net when the papers on bear-friendly corridors are peer-reviewed. The GIS-based method we use to connect the world’s reserves was the same technique we used to design corridors for tiger dispersal in the Terai Arc Landscape of Nepal and India. The efficacy of this corridor design, published years ago, has been corroborated by field biologists who install tiger camera-traps for a living. So we think we are on the right track. 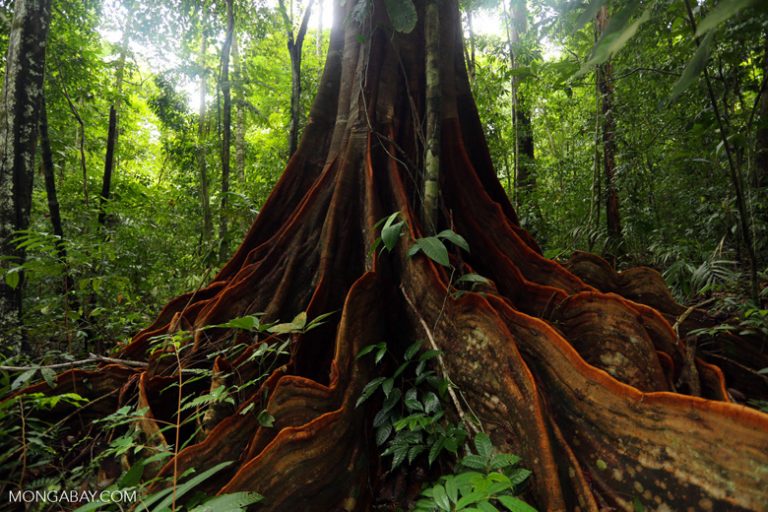 Tropical rainforest in Costa Rica. Rainforests have the highest terrestrial biodiversity on Earth. Photo by Rhett A. Butler. 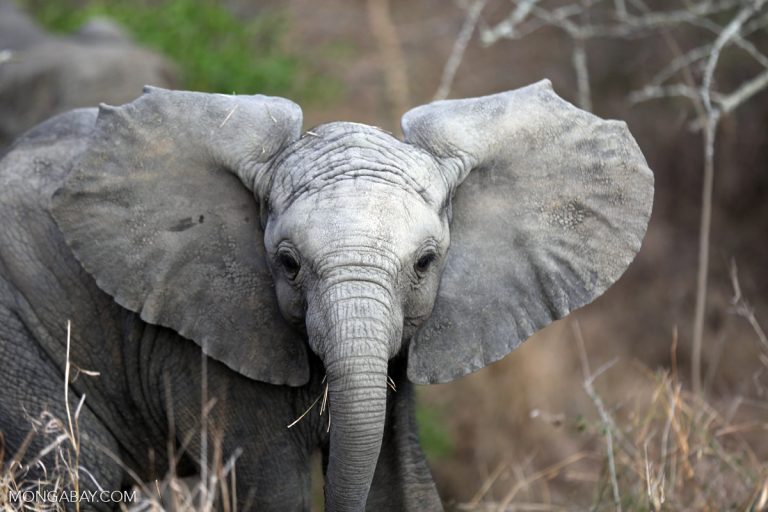 Elephant calf in Africa. Photo credit by Rhett A. Butler.

The Safety Net is extremely ambitious from a data standpoint. Could you elaborate on how technology is being employed in this effort?

I think you hear this refrain frequently from any global analysis and visualization based on Big Data. In the old days, say six years ago, this type of study would have been impossible or taken a single laptop working away since the days of the Magna Carta to the present day to run the whole thing. But the processing power offered by super-computing, massive data storage, higher resolution satellite imagery, and the emergence of computational science has been invaluable. And we are just getting started, adding new data layers monthly or swapping out higher resolution data sets for “older” more coarse data. But without visionary scientists contributing their insights to create the essential data layers on land use, biodiversity, deforestation, and other critical data streams, the visualizations would not mean much, or worse, be highly misleading. This has been a team effort and the team will grow larger in the months ahead as we bring marine conservation into the Safety Net. 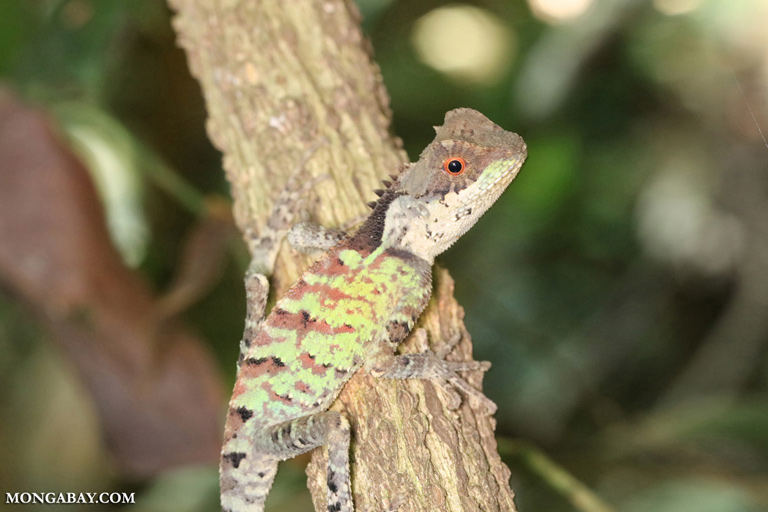 A forest dragon in Vietnam, a country that despite extensive forest loss, still retains incredible biological richness. Photo by Rhett A. Butler. 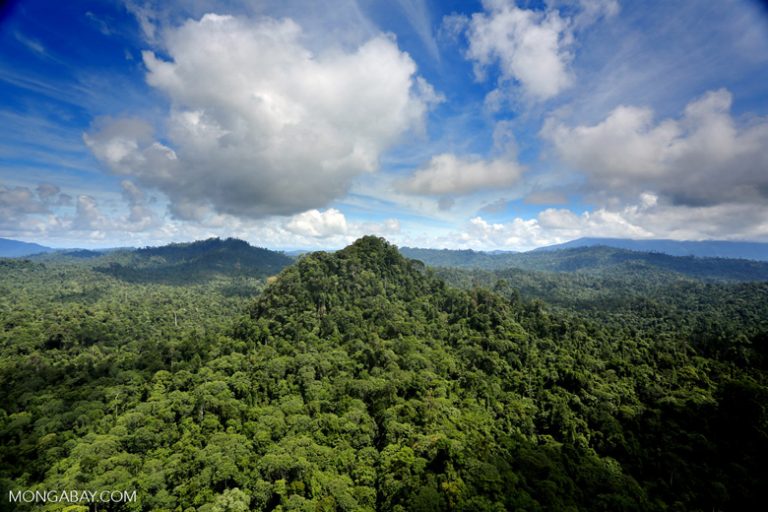 Bornean rainforest that is home to endangered elephants, orangutans, and clouded leopards. Photo by Rhett A. Butler.

What is Resolve’s role supporting in the “safety net”?

We have been the lead biological consultants on the project from the outset which for me is one of the greatest honors of my professional life. We have drawn on an exceptional team of conservation biologists who pioneered a lot of important data analyses we are using. And we have added to our roster some of the world’s greatest environmental scientists who will be working closely with us like Dr. Greg Asner from the Carnegie Institution, and Dr. Reed Noss, who many in our field, like me, regard as the father of modern day conservation biology. The marine scientists who will be joining us are among the world’s most renowned. I am humbled to be working with them and learn something new every day. Combine that with top computational experts at Globaïa, who create the breathtaking visualizations that make the data come alive and our planet an orb to treasure. Expertly guiding us are the top strategists at the Leonardo DiCaprio Foundation, the most visionary people I have worked with in my years in conservation. 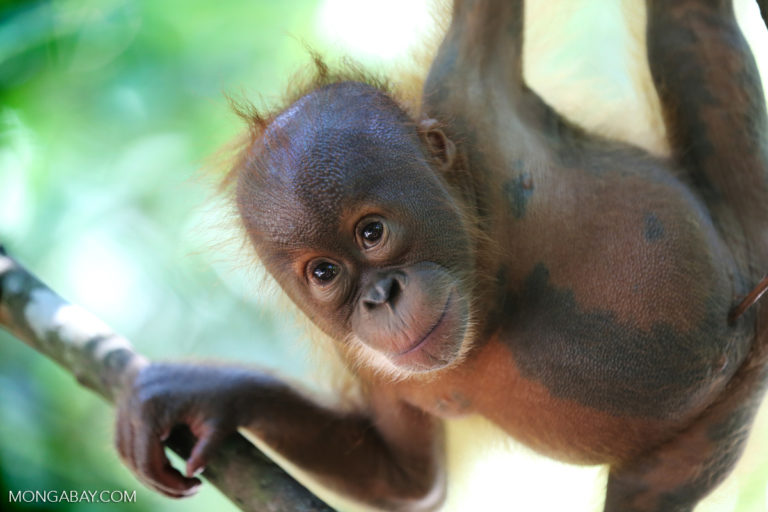 A baby orangutan in North Sumatra, Indonesia. Along with habitat loss due to mining, orangutans in both Sumatra and Borneo are threatened by fires and deforestation for oil palm and pulp plantations. Photo by Rhett Butler/Mongabay.

What sort of resources are needed to realize the 50 percent target and where do you envision those funds coming from?

Much less than people realize. In a paper we published this year in Bioscience on an ecoregion-based approach to protect 50% of the terrestrial realm (and reprised in the Sept 29 issue of the journal Nature by James Watson and Oscar Venter), we quoted an estimate of about $8-80 billion/year to achieve the protection goals for the terrestrial realm and $5-19 billion/year for marine. While there is some bit of range in these numbers, even at the high end, it is well within our budget if we value a functioning biosphere. Global expenditures for conservation currently are about $10 billion by governments and non-profits, and foundations, but the allocation is highly skewed. Not enough funds are going to where they are needed most in the tropical countries. Some conservationists haul out the refrain for the cost of a few B-1 bombers a year how we could afford to protect nature. I think a better example is the billions in subsidies for the fossil fuel industries – a recent analysis puts it at $5 trillion in 2015 alone. So if even a fraction of that amount was re-directed by governments from industries contributing to global warming to conservation that prevents warming, the Safety Net would be paid for yielding enormous dividends for a sustainable biosphere. There are high net worth individuals who could really make a huge difference and become household names for their catalytic philanthropy. Finally, when you think that Americans spend each year as much as we might need to conserve the safety net on pet food and grooming, why not value the wild relatives of our beloved pets and their habitats just as much and finance their conservation? 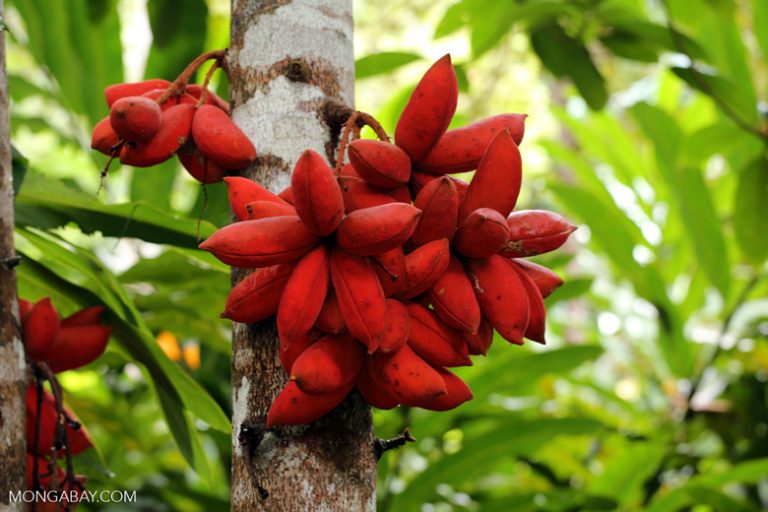 Will the safety net be enough to sustain healthy and productive ecosystems, while thwarting the sixth great extinction?

We believe so. Another apt metaphor linked to the global Safety Net is that it offers us a set of guard rails. Everyone who drives a car or rides a bike understands the concept of guard rails. You stay between them, you stay on the road, you keep from shooting off the cliff. So we are attempting to map a future in 2050 where, if implemented in full, would keep us between the two most important guard rails of the future—cultivating enough arable land to properly feed 9.5 billion people on one side, and on the other, leaving enough room for nature without suffering a mass extinction event. All species have to live somewhere and we feel the Safety Net, at least for the land, captures the critical areas.

And we have only just begun this effort. We intend to add the marine component in a tandem effort with top marine scientists, more analysis on concordance with important freshwater biodiversity, and the tropical forests that will likely be important climatic refuges if a drying trend occurs. We will also test the version 1 of the Safety Net against the best conservation plans developed for a subset of the world’s most important ecoregions. But remember, for about 550 of the world’s terrestrial ecoregions, there is no conservation plan at all. Overlaying these ecoregions lacking such plans with the current safety net is at least a skeletal approach of where to start now while we add more flash on the bones of these plans. Hopefully, the appearance of the Safety Net catalyzes renewed efforts. It’s a good place to start to avoid further losses and to protect right away. 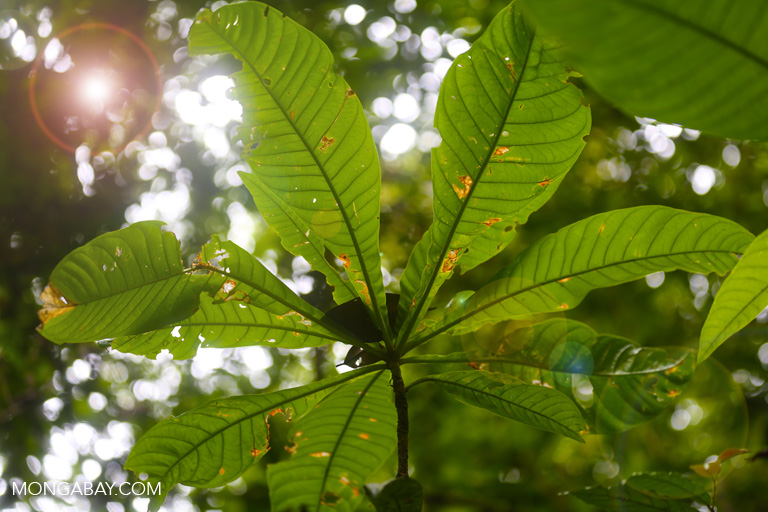 Rainforest in Malaysian Borneo, one of the priority hotspots for protecting plant and animal species. Photo by Rhett A. Butler 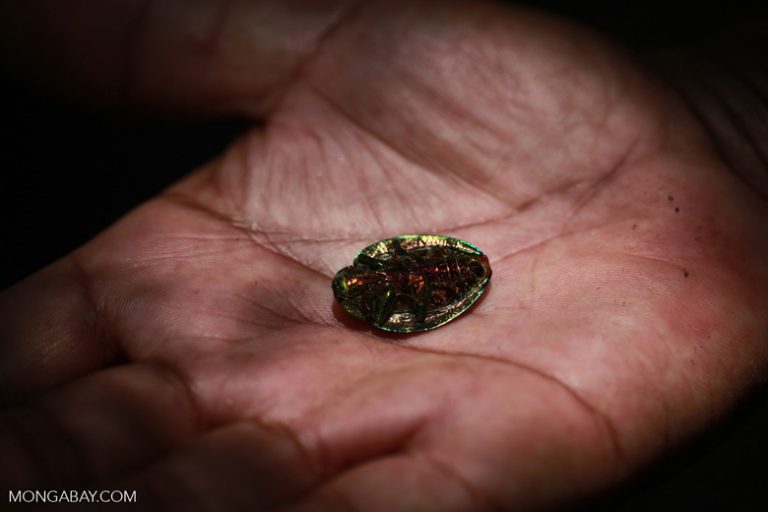 A jewel beetle in Madagascar, an island that has extremely high levels of endemic species. Photo by Rhett A. Butler.