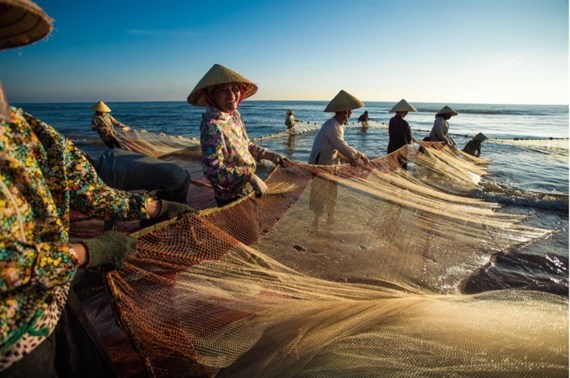 A master plan on the use of Vietnam’s sea is being built by the Ministry of Natural Resources and Environment, a necessary move according to experts.

Fisherwomen in the central province of Thanh Hoa unfurl their fishing nets in the early morning on Sam Son Beach.

The plan will map out sea-based socio-economic activities until 2035 in line with integrated management of sea and island resources and environment.

It focuses on marine environment and resources, the value of marine ecosystems and appropriate exploitation of the sea.

The plan is being built in accordance with the Vietnam Law on Sea and the Law on Vietnam’s Sea and Island Natural Resources and Environment.

It will cover all sea areas of Vietnam, including internal waters, the territorial sea, contiguous zone, the exclusive economic zone and the continental shelf of Vietnam, including Hoang Sa (Paracel) and Truong Sa (Spartly) archipelagos, as defined in the Vietnam Law on Sea and in line with the 1982 United Nations Convention on the Law of the Sea.

The plan sets out three main groups of criteria for zoning off sea areas.

The third group looks at national defence and security in strategic locations and the needs to protect sovereignty and security at sea.

Each zone will be defined and categorised with activities allowed, disallowed or restricted to reduce contradictions in using marine resources, contributing to protecting the environment and creating legal grounds for departments, branches and sectors of coastal localities to base their plans on.

According to Deputy Head of the Vietnam Administration of Seas and Islands, Pham Ngoc Son, Vietnam can develop sea-based economy, with its more than 3,260km coast, an exclusive economic zone of about one million sq.km and diversified maritime resources.

Building the master plan is urgent to protect Vietnam’s sea areas and islands on the basis of harmonising economic benefits, environmental protection, ensuring security and national defence, and reducing conflicts between sectors using the seas.

Many plans relating to the management and use of seas have been built but there is no master plan to regulate all sectors and areas that use maritime resources in tandem with overall Party and State planning.

Son said the intense exploitation of maritime resources from various sectors was not in line with the ecological function of sea areas, leading to a clash between economic development and sea preservation. This could reduce maritime resources and biological diversification, and cause environmental pollution, he added.

Natural disasters and climate change also threatened the sustainable and effective use of the sea.

Head of the Department of Sea and Island Exploitation Management Nguyen Duc Toan said integrated marine use planning was a new tool for sea management. The master plan on sea use would be built by analysing natural conditions, marine environment and ecosystems, and sea exploitation, use and management.

Focus should also be put on completing co-ordination mechanisms between ministries and agencies in granting licences, supervising and punishing violations in using and protecting maritime resources, setting up a national system to manage sea environment incidents and reviewing related policies and regulations.

It would also be essential to build mechanisms and policies to encourage investment in developing infrastructure and exploiting the seas, he said.