Home Science Energy Meet the Chinese businessman behind the $1.8B plan to make methanol in... 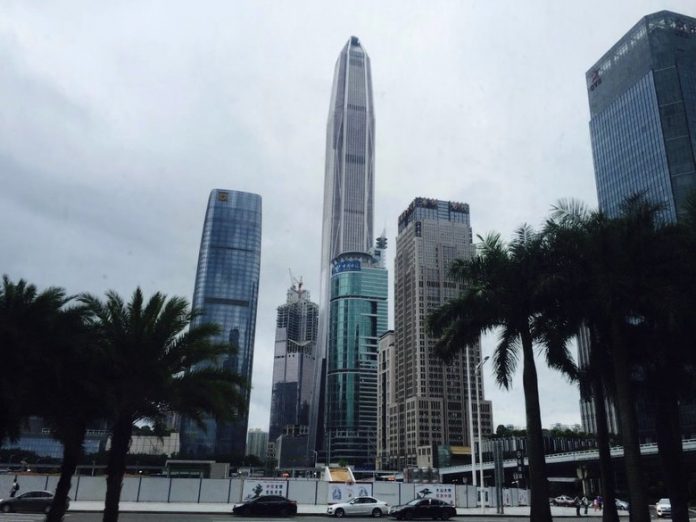 BEIJING — Wu Lebin declares himself to be a champion of green development, and he is in a powerful position to make that happen. He is chairman of a multibillion-dollar holding company spun off from the Chinese Academy of Sciences.

His office wall prominently features a large, framed photograph of his handshake with President Xi Jinping when both visited Seattle in 2015.

Washington is key to his ambition.

He wants to move China, and the world, toward cleaner-burning fuels. And, at the Columbia River Port of Kalama, he plans to build a $1.8 billion plant that would make methanol from North American natural gas rather than the coal that is the feedstock in his nation. The goal is to create a low-carbon alternative that could help in the global effort to lower greenhouse-gas emissions that drive climate change.

The plant, in Cowlitz County, would be built by a joint venture — NW Innovation Works — formed by Wu’s company, CAS Holdings. Construction could begin as early as next winter for a plant that would export the chemical for use in China’s plastics industry.

Wu said he has been encouraged in this undertaking by Xi, and noted he has supporters in Southwest Washington, where the plant would provide nearly 200 family-wage jobs and — over the years — tens of millions of dollars in local property taxes. “We need to make Kalama successful. It can be a good model for international collaboration and sustainable development,” Wu told The Seattle Times.

Pacific Northwest environmentalists do not share in Wu’s vision.

They have been campaigning for years to keep the region from becoming a hub for exporting fossil fuels to Asia. They don’t want the region’s green development to include using fracked natural gas to produce raw materials for a plastics industry that has left a legacy of pollution on land and sea.

Environmentalists were at the forefront of a buzz saw of opposition to a methanol plant that NW Innovation Works proposed in 2015 for Tacoma. That project was canceled.

Columbia Riverkeeper, the Sierra Club and other groups are focused on the Kalama plant, which generated some 6,000 public comments — mostly negative — during a regulatory review. It would result in a 33 percent increase in Washington state’s current use of natural gas.

“If they build it, they are going to lock us into this fossil-fuel technology for another 20 or 30 years,” said Brett VandenHeuvel, executive director of Columbia Riverkeeper. Columbia Riverkeeper has joined with two other environmental groups to appeal two permits required for the project to move ahead.

“Pollution is too serious”

Wu has an unusual business résumé.

He began his career as a surgeon, working two years in a hospital in rural China. He returned to school to study anthropology, and then went to work in the Chinese Academy of Sciences — a sprawling network of more than than 100 government-funded research institutes, with branches around the country.

In 2014, Wu became chairman of CAS Holdings. By then China’s research into coal, much of it through the academy, had helped to birth a major new industry converting this abundant fossil fuel into high-value chemicals.

These coal-based plants now produce about 60 percent of China’s methanol, which is used to make olefins — a building block of plastics — as well as fuels, pharmaceuticals and other products.

Methanol also is imported from overseas, where it is made from natural gas, according to Mark Berggren, managing director of Methanol Market Services Asia.

China’s massive coal complexes are big sources of greenhouse gases as well as toxic releases into the air and water.

“We found that coal is facing problems that cannot be solved yet. The pollution is too serious,” Wu said.

He went in search of cleaner alternatives in the Pacific Northwest, where he could draw upon abundant sources of natural gas that are scarce and expensive in China.

In the years ahead, methanol is forecast to be in increasing demand in China, and the coal-to-chemicals industry is expected to continue to grow rapidly.

A Greenpeace analysis released this year found that the industry’s carbon emissions would at least triple between 2015 and 2020, and possibly increase by as much as ninefold.

The uncertainty results from how many of the proposed projects will actually come on line.

But VandenHeuvel, of Columbia Riverkeeper, said there’s no way to know. Perhaps the Kalama methanol will substitute for the natural gas-based methanol now imported from the Middle East rather than reduce demand for China’s coal-based chemical.

“It’s one of their primary arguments of why this is a positive thing. But they have offered no evidence that will happen, and why should we take their word?” VandenHeuvel said.

There also is debate over just how much greenhouse gases would be emitted by the Kalama plant.

The Kalama plant design is intended to dramatically reduce greenhouse gases, not only compared to coal-based methanol plants but others that convert natural gas to the chemical. 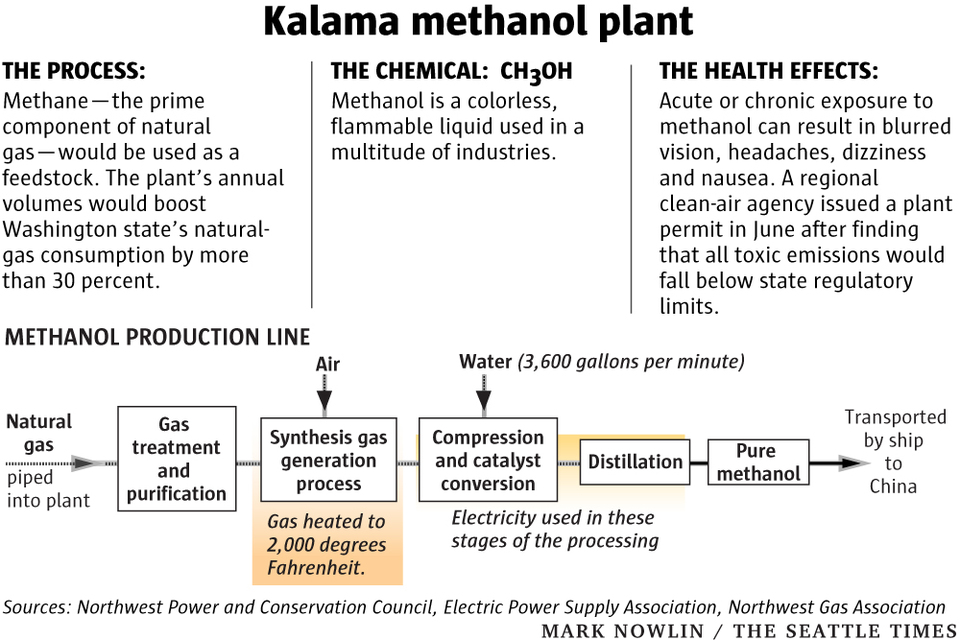 NW Innovation officials say this would be accomplished by using electricity — largely from renewable sources of energy — as the energy to make the methanol.

So in permits approved in June, they required plant operators to find ways, over time, to eliminate or offset the plant’s carbon emissions.

Environmental attorneys, in their appeal of the permits filed last week, said state regulators underestimated these greenhouse-gas emissions. They contend the tally also should include the methane that would be released as natural gas is produced and piped to the Kalama plant.

“When you look at the life cycle [emissions] of natural gas, it is not a dramatic step forward for the planet,” VandenHeuvel said.

Wu said his company will continue to make its case to skeptics. “I can understand the questions they raise. That’s not bad for us because we would like to make everything very friendly toward the environment — but if they say stop, I will be frustrated.”

For the plant to move forward, NW Innovation Works must be able to competitively price its methanol in a global market.

But this is CAS’ first foray into methanol production, and that could complicate financing.

“CAS is kind of a mystery to the methanol industry, and this is a big investment,” said Berggren, of Methanol Market Services Asia.

One possibility is a loan from a U.S. Department of Energy program.

That program faces an uncertain future, though, as the Trump administration’s proposed budget would eliminate it.

Company officials said they are looking at other options in the private sector.

If this project succeeds, Wu said, he hopes to build more methanol plants in the Pacific Northwest, including British Columbia.