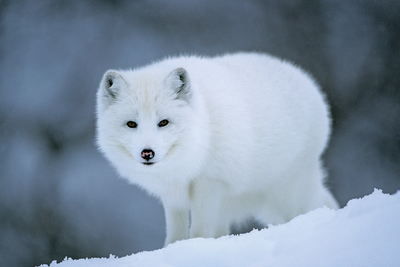 Given the inertia that characterizes the public response to the challenges of climate change, it is reasonable to ask whether the forms and channels used to communicate these challenges have been adequate. Talks presented at professional academic meetings may be clear, concise and to the point, but these are scientists talking to scientists. IPCC reports that provide an objective view of climate change and its political and economic impacts are summarized for the press and other media, but it has been suggested that facts are not enough to overcome the public’s present state of inaction1, 2, 3. Thus, it seems that scientists and disseminators are like the orchestra playing bravely on as the Titanic approaches the iceberg. To achieve political action on climate change it is necessary to activate the public to a totally different degree. There is a developing consensus that museums could play a significant role.

The Arctic fox in the Varanger Peninsula National Park is on the International Union for Conservation of Nature’s red list of species threatened by climate change.

How and where communication is achieved is as important as what is communicated. The best museum projects prioritize communication over information4, and dialogue is prized over the one-way transmission of facts; in museums, the language of science can be translated and given a more accessible form. For example, storytelling is increasingly being recognized as an effective interpretative tool within museums and galleries. In addition, museums are perceived as being impartial actors in society and guardians of truth. They transcend boundaries in both space and time, and have established successful patterns of international cooperation over national borders, an essential requisite for meeting the challenges of the inherently global nature of climate change. In essence, there already exists an international infrastructure for communicating the challenges and impacts of climate change through museums, and in December 2016 the executive board of the International Council Of Museums initiated an extensive review of the various climate change initiatives. Museums also erase borders between disciplines and between other sectors of society, a precondition for addressing the complex nature of climate change as a cultural, ecological and technological challenge. Museums are equipped with tools for the dissemination of complex themes and have the capacity to rethink and adjust their dissemination skill sets to meet new challenges. Thus they are capable of building awareness, changing attitudes to climate change and activating the public. According to Robert Janes, editor-in-chief of Museum Management and Curatorship and author of Museums in a Troubled World, museums are “key intellectual and civic resources that are largely untapped and unacknowledged”5 that can act as social spaces, arenas in which different communities can come together to understand the challenges of climate change through dialogue, share ideas for action and build networks that support responses. Marcus Carson, a senior research fellow at Stockholm Environment Institute, maintains that to succeed in climate change communication one must think globally, act locally6. Museums are unique institutions, bridging the gap between the global and local.

One example of this is being developed by the Varanger museum. Situated on Norway’s northeast coast, it is located in the sole municipality on mainland Norway within the arctic climatic zone. The Arctic tundra will be more challenged by climate change than any other terrestrial biome. This has inspired a museum project on how climate change is impacting the Varanger Peninsula National Park7. The museum has assembled an interdisciplinary team consisting of climate researchers from Norway’s Arctic University (http://www.coat.no), national park researchers and rangers, philosophers specializing in working with young people, and non-governmental organizations (NGOs). The goal is to provide an arena that encourages an awareness of the ethical nature of global climate change by presenting the local impacts on bumblebees, salmon smolts, migrating birds, and the Arctic fox as visitors wander through the national park’s landscape. The concept of the museum as an arena for thinking globally while focussing on local climate change issues can encompass many dissemination approaches, target groups, sites and formats.

However, the effects of climate change are everywhere, they impinge on everybody and everything, and they will also increasingly require responses at the international level. The international community has invested the resources necessary to provide policymakers with a scientific foundation for their decisions (for example, ref. 8). There is now a comparable need to allocate resources to providing a comprehensive account of the challenges of climate change that is easily accessible for the general public. There is an increasingly urgent need to address dissemination to the public on the same scale as the earlier need for providing scientific proof to policymakers.

Museum professionals at the American Museum of Natural History and the Climate Museum, New York; the National Museum of Australia, Canberra; the Varanger Museum, Norway; and the Coalition of Museums on Climate Change established in Canada have defined a number of objectives as starting points for implementing action. First, museums should speak with one voice on the international stage. At present, the international museum movement is noticeably absent from forums such as the Paris conference or UN presentations. Second, museums should be encouraged to develop as arenas for dialogue with NGOs and other community organizations and independent bodies at a local level, and governments and the UN on the international stage. Third, wider engagement on the issues of climate change should be promoted among all museums, not only specialist museums, science museums, or museums of natural history. However, museums must also be prepared to relinquish some of their more cherished notions, such as neutrality5 and control over their own spaces. Art museums in particular have been willing to lead in this regard (for example the C Words exhibition at the Arnolfini Gallery in Bristol9). Broadly, the aim of the above initiative is that all museums be perceived as catalysts for change through enhancing public awareness and inspiring public action.

For instance, one could envisage the international museum sector cooperating with the UN in the dissemination of future reports. Museum professionals could be invited to design a dissemination project to communicate the contents of the 2018 report on the impacts of the 1.5 °C scenario. In conjunction with the publication of the report, this dissemination project might be placed at the centre of a world climate week during which museums around the world would be transformed into arenas where the public could participate in a programme of in-depth lectures, debates, discussions, exhibitions and events arranged either in-house or, preferably, in cooperation with other actors.

This might seem to be located in the realms of fantasy. However, for fantasy to become reality only requires acceptance from the signatories of the Paris conference that their citizens should be provided with a real opportunity to participate in the debates that will follow publication of the 2018 report. Indeed, there is a convincing argument that worldwide public participation is a precondition for successfully meeting the goals that the international community has committed themselves to in the agreement. Museums, by offering an international infrastructure, unique dissemination skills and an accessible local arena, can facilitate this goal.