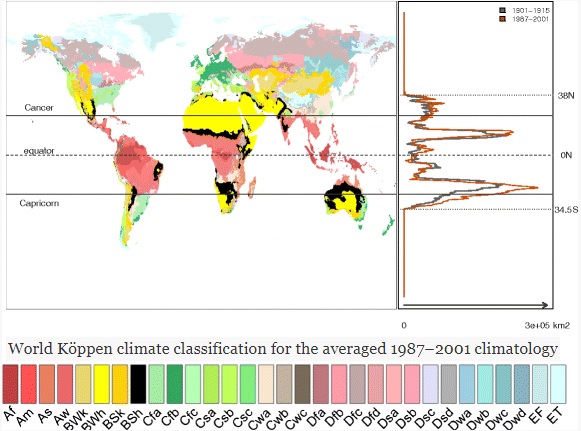 A selection of new climate related research articles is shown below.

“Focusing on the “hiatus” period 1998-2012 as identified by the Intergovernmental Panel on Climate Change (IPCC) report, the SAT has increased at 0.45 °C/decade, which captures more than 90% of the regional trend for 1951-2012. We suggest that sparse in-situ measurements are responsible for underestimation of the SAT change in the gridded datasets.“

2. Extreme warming in the Kara Sea and Barents Sea during the winter period 2000 to 2016

“The maximum warming occurs north of Novaya Zemlya in the Kara Sea and Barents Sea between March 2003-2012 and is responsible for up to 20°C increase. Land-based observations confirm the increase but do not cover the maximum regions that are located over the ocean and sea-ice.“

“We show that a global expansion of this climatic domain has already started according to climate observations in the twentieth century (about + 13% of surface increase, i.e. from 6 to 7% of the global land surface). Models project that this expansion will continue throughout the twenty-first century, whatever the scenario…“

5. Is Nitrogen the Next Carbon?

“The increased use of nitrogen has been critical for increased crop yields and protein production needed to keep pace with the growing world population. However, similar to carbon, the release of fixed nitrogen into the natural environment is linked to adverse consequences at local, regional, and global scales. Anthropogenic contributions of fixed nitrogen continue to grow relative to the natural budget, with uncertain consequences.“

6. Annual and seasonal tornado activity in the United States and the global wind oscillation

“Combined, these analyses suggest that seasons with more low atmospheric angular momentum days, or phase 2, 3, and 4 days, tend to have greater tornado activity than those with fewer days, and that this relationship is most evident in winter and spring.“

“Using a simple conceptual model for the occurrence of extreme weather events, we show that if the objective is to minimize forecast error, an alternative approach wherein likelihoods of impact are continually updated as data become available is preferable. Using a simple “proof-of-concept,” we show that such an approach will, under rather general assumptions, yield more accurate forecasts.“

8. Trends in extreme temperature indices in Huang-Huai-Hai River Basin of China during 1961–2014

9. Is the choice of statistical paradigm critical in extreme event attribution studies?

10. How will precipitation change in extratropical cyclones as the planet warms? Insights from a large initial condition climate model ensemble

13. Modulation of the seasonal cycle of Antarctic sea ice extent related to the Southern Annular Mode

14. Lake dynamics and its relationship to climate change on the Tibetan Plateau over the last four decades

16. The weakened intensity of atmospheric quasi-biweekly oscillation over the western North Pacific during late summer around the late 1990s

21. Comparison of climatic trends and variability among glacierized environments in the Western Himalayas

“The prescribed LED was 4.2% greater in January and 4.5% lower in July. Statistical analysis showed that temperature was associated with the prescription of Parkinson medications. Our results suggest seasonality exists in Parkinson’s disease symptoms and this may be related to temperature.“

23. The effects of hot nights on mortality in Barcelona, Spain

“Specifically, we show that in the combined presence of OA and a cubozoan predator, populations of the most abundant member of the zooplankton community (calanoid copepods) were reduced 27% more than it would be predicted based on the effects of these stressors in isolation, suggesting that OA increases the susceptibility of plankton to predation. Our results indicate that the ecological consequences of OA may be greater than predicted from single-species experiments, and highlight the need to understand future marine global change from a community perspective.“

28. The relationship between extreme weather events and crop losses in central Taiwan

33. Alterations in microbial community composition with increasing fCO2: a mesocosm study in the eastern Baltic Sea

35. Phenology of a dipterocarp forest with seasonal drought: insights into the origin of general flowering

37. Evaluating the classical versus an emerging conceptual model of peatland methane dynamics

38. Patterns and biases of climate-change threats in the IUCN Red List

41. Does the world have low-carbon bioenergy potential from the dedicated use of land?

ABSTRACT: “While some studies find no room for the dedicated use of land for bioenergy because of growing food needs, other studies estimate large bioenergy potentials, even at levels greater than total existing human plant harvest. Analyzing this second category of studies, we find they have in various ways counted the carbon benefits of using land for biofuels but ignored the costs. Basic carbon opportunity cost calculations per hectare explain why alternative uses of any available land are likely to do more to hold down climate change. Because we find that solar power can provide at least 100 times more useable energy per hectare on three quarters of the world’s land, any “surplus” land could also provide the same energy and mitigate climate ~ 100 times more if 1% were devoted to solar and the rest to carbon storage. Review of large bioenergy potential estimates from recent IAMs shows that they depend on many contingencies for carbon benefits, can impose many biodiversity and food costs, and are more predictions of what bioenergy might be in idealized than plausible, future scenarios. At least at this time, policy should not support bioenergy from energy crops and other dedicated uses of land.“

42. Who Wins from Emissions Trading? Evidence from California

43. Climate change and the re-evaluation of cost-benefit analysis

“In this essay, I discuss the shortcomings of CBA framed by its historical development and argue that its relatively recent application to climate change has contributed to growth in the literature re-evaluating its normative foundations.“

44. The Value of Energy Efficiency and the Role of Expected Heating Costs

45. Some problems in storing renewable energy

47. The withdrawal of the U.S. from the Paris Agreement and its impact on global climate change governance

48. On the impacts of computing daily temperatures as the average of the daily minimum and maximum temperatures

“Our results show that the calculation of daily temperature based on the average of minimum and maximum daily readings leads to an overestimation of the daily values of ~ 10+ % when focusing on extremes and values above (below) high (low) thresholds. Moreover, the effects of the data processing method on trend estimation are generally small, even though the use of the daily minimum and maximum readings reduces the power of trend detection (~ 5–10% fewer trends detected in comparison with the reference data).“