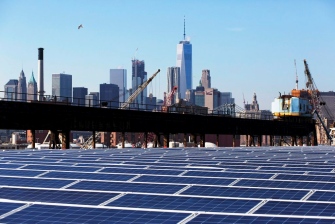 ConEdison Solutions installed these 3,152 solar panels at the Brooklyn Navy Yard in 2016. They generate 1.1 million kilowatt hours of electricity per year, demonstrating how a mix of power generation can fight air pollution and climate change. (Associated Press File)

Environmental regulation always will be a partisan issue but the environment itself is a nonpartisan entity.

That has happened within the scientific community, where there is broad consensus that human activity continues to help drive climate change for the worse. And it has happened even on the international level, through broad agreements to diminish the human contribution to warming the planet.

One crucial bastion where dissent holds sway, however, is the Trump administration. The Environmental Protection Agency this week withdrew an earlier rule requiring oil and gas companies to report the escape of greenhouses gases from their operations.

Some congressional Republicans see a more rational approach; 17 of them, including Reps. Ryan Costello, Brian Fitzpatrick and Patrick Meehan of Pennsylvania, have introduced the Republican Climate Resolution. It states that it is “a conservative principle to protect, conserve and be good stewards of the environment.” And it notes the impact on the economy of unchecked climate change, and that the Pentagon has classified climate change as a major national security threat.

The resolution calls on the House to commit “to working constructively, using our tradition of American ingenuity, innovation, and exceptionalism, to create and support economically viable, and broadly supported private and public solutions to study and address the causes and effects of measured changes to our global and regional climates, including mitigation efforts and efforts to balance human activities that have been found to have an impact.”