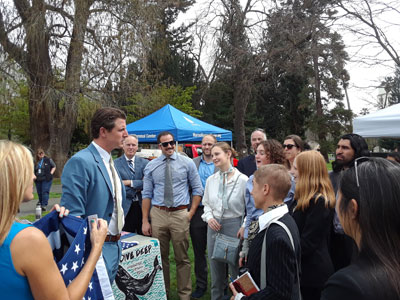 SACRAMENTO, Calif. – The world’s oceans are deeply affected by climate change – and vice versa. But until recent years, ocean advocates throughout California had long tackled issues like over-fishing and coastal pollution without as much emphasis on the broad-reaching relationship between climate and oceans.

That’s all changed, as evidenced by a March annual lobbying event at the state capitol.

In 2004, when a dozen or so advocates gathered for the first Ocean Day, “climate change was a side issue,” said Environment California’s Dan Jacobson, who launched the event.

When more than 200 people convened from throughout the state last month, climate had become “the overarching issue” in legislator meetings on a range of topics.

“It’s become an underlying theme in everything we’re doing,” said Jacobson. “Even the guy who literally rescues animals stranded on the shore is saying, ‘Of course, this is all getting worse because of climate change.’”

Through the day, small groups from a mix of organizations like Environment California, Surfrider, and Azul met with state assembly-members and senators on a range of key ocean issues, such as offshore drilling, plastic pollution, and sea-level rise – with conversations often touching naturally on climate change.

For example, the single-use plastic ban many groups advocated for is a wildlife issue – and a climate issue, too. Made from oil and natural gas, simply producing plastic contributes directly to an industry that fuels climate change. Plus, new research in PLOS One suggests plastic may produce “climate-relevant trace gases” that could increase as more is produced and accumulates in oceans.

Scientific research addressing climate and oceans is pouring in: oceans are losing oxygen and experiencing acidification, often at drastic rates; projected damages resulting from sea-level rise “could exceed those from the worst wildfires and earthquakes.”

But also inspiring change is mounting public awareness that climate change will cause more damage to our oceans – and to ocean life as we know it – if left unchecked.

Take Heirs to Our Oceans’ Aislinn Clark, a 13-year old ocean policy advocate from Pescadero. Working on a novel in her spare time, she says she wants to be a writer in part so she can help others imagine how climate change, or inaction on it, could play out in future realities.

In her group’s meeting with Senator Hannah-Beth Jackson of California’s 19th Senate District, this driven teen declared, “we’re going to be the decision-makers.”

Jackson’s response: “I’m not going to be able to accomplish [environmental protection to the extent needed] in my lifetime, but you might be able to do it in yours …. It’s your generation that’s going to make it happen.”

Jackson is a Democrat, but there was a sense throughout the day that protecting oceans from threats like sea-level rise is important to state legislators on both sides of the aisle.

“What’s interesting is that everyone is coming together on climate,” said Jacobson. “They’re still not singing the same tune, but they’re all singing.”

The hard thing now is agreeing on particular strategies. 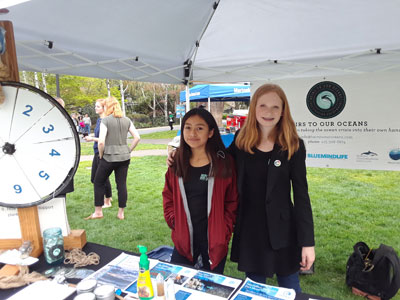 For example, Amy Wolfrum of the Monterey Bay Aquarium discussed how, in Pacific Grove, California, some favor building artificial sea walls while others would opt for natural solutions like dunes.

Time is of the essence, however, when it comes to mitigating future effects of climate change and reducing impacts now.

“We have 11 years, right, until everything we do is irreversible, Heirs to Our Oceans eighth-grader Sophie Mansoor said, perhaps thinking of a 2018 IPCC report. “If we don’t reduce emissions by 45 percent, my children won’t have a future.”

What happens in California … can have a ripple effect

In absence of federal action on climate, states like California are proving important torch-carriers of the Paris climate goals.

And encouraging legislators to connect the dots between climate and ocean issues could help bring more climate-smart policy to life in a state whose population is passionate about its coast.

Today some 26 million Californians live in coastal counties – about as many as live along the coast in New Jersey, Texas and Florida combined. The state’s ocean-based economy is valued at roughly $45 billion annually, and employs more than a half million people.

And as the fifth largest economy in the world, California has the potential to make a real dent in global emissions – and serve as an example to others.

As secretary of the state’s department of natural resources Wade Crowfoot said in his Ocean Day remarks, “If we can’t do it in California, where else in the world are we going to do it?”