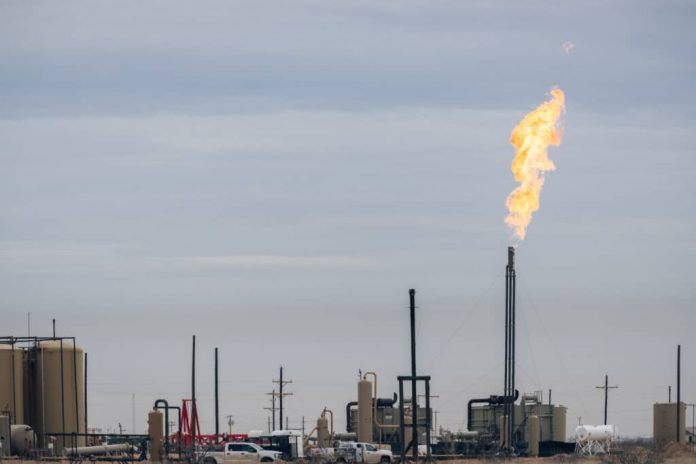 The oil industry has embarked on a lobbying blitz in an effort to derail any attempts by Congress to repeal fossil fuel subsidies as part of a much broader assault by corporate interests on the $3.5 trillion budget package that Democrats are currently drafting.

In particular, the oil industry is worried about the potential loss of one specific subsidy that they receive: the intangible drilling cost (IDC) deduction. This allows companies to deduct from their taxes the costs of drilling new wells.

The industry’s fear follows a letter sent to Democratic leadership on August 30, by Rep. Carolyn Maloney (D-NY), the Chair of the House Oversight and Reform Committee, and Rep. Ro Khanna (D-CA), who chairs the subcommittee on Environment.

The letter, signed by 50 other Democrats from the House of Representatives, specifically calls for the removal of the IDC deduction as part of the budget reconciliation process underway. The tax giveaway is worth billions of dollars each year, and makes up a large portion of the $20.5 billion that Democrats are targeting.

“Fossil fuel subsidies have been embedded in our tax code for over a hundred years, enriching oil and gas companies and their lobbying firms at the expense of our planet. It comes as no surprise to see Big Oil currently working overtime to protect these benefits,” Congressman Ro Khanna’s office told DeSmog in a statement. “What’s different now is that we have a real chance to end the worst of these subsidies in the Build Back Better Act and I’m committed to working with my colleagues in Congress to do so.”

The American Exploration and Production Council

Among those lobbying is a relatively obscure industry lobby group, the American Exploration and Production Council (AXPC), which is heavily pushing Congress to keep the IDC in place. AXPC is a collection of some of the largest fracking companies in the U.S., including ConocoPhillips, Chesapeake Energy, EOG Resources, Occidental Petroleum, Pioneer Natural Resources, EQT, and ExxonMobil subsidiary XTO Energy.

AXPC’s website is sparse, but has a heavy focus on the intangible drilling cost deduction, which appears to be one of only a few policy issues on which the industry front group is lobbying. According to The Hill, AXPC is “rounding up support from moderate Democrats from fracking-heavy states such as Texas, Pennsylvania and Ohio to ensure the deduction survives.”

AXPC warns that eliminating the IDC deduction would result in job losses, and frames its potential elimination as “increased taxes.”

AXPC also says that without the intangible drilling cost deduction, the number of wells drilled would decline by 25 percent. Whether or not those figures are accurate, it is true that federal largesse does prop up otherwise unprofitable drilling to some extent.

A recent paper published in the peer-reviewed journal Environmental Research Letters in July found that the IDC deduction can boost the returns of an oil drilling project by as much as 11 percentage points. For projects that were already profitable to begin with, the subsidy simply pads corporate profits. For projects on the margins, the subsidy results in extra drilling.

AXPC is also opposing methane regulations and fees, arguing that it would “empower” Russia and Iran due to higher costs on American producers. Methane is an extremely powerful greenhouse gas, and leaks from a range of oil and gas infrastructure in both the U.S. and around the world.

Ties to Republican Politics and Industry

The industry lobby group AXPC is led by Anne Bradbury, who previously worked in the House of Representatives for two former Republican Speakers of the House of Representatives – House Speaker Paul Ryan (R-WI) and House Speaker John Boehner (R-OH). Liz Bowman, AXPC’s vice president for communications, previously worked at the oil trade group American Petroleum Institute, and also in the public affairs office of the U.S. Environmental Protection Agency during the Trump administration. The handful of other staffers working at AXPC also have extensive backgrounds in both Republican politics and the oil and gas industry.

According to Greenpeace, the oil companies that make up AXPC have long enjoyed federal subsidies, receiving at least $92 billion combined since 1998, while also racking up more than $700 million in fines for environmental and other violations.

Meanwhile, those companies also doled out $188 million in executive pay in 2020, a year in which many of them tapped federal bailout money in the CARES Act, aid meant to prop up the economy during the pandemic. And even as the oil companies received huge sums for pandemic relief, they also laid off workers.

Last year, Bailout Watch, a watchdog group, singled out Diamondback Energy and EOG Resources in its “Hall of Shame” for their particularly egregious behavior of taking federal bailout money while boosting pay to executives and shareholders. Both are members of AXPC.

AXPC did not respond to a list of questions from DeSmog.

The Stakes Are ‘Turbocharged’

As climate scientists continue to warn with increasing alarm, the world needs to phase out fossil fuel production and consumption as fast as possible. The International Energy Agency also warned earlier this year that new oil and gas projects are not compatible with global climate targets.

“[T]he fact that [the IDC] subsidy still exists at all, when the U.S. and the world need to be phasing down oil and gas consumption and production, indicates that removing it would be a prudent step, both for fiscal reasons as well as for climate reasons,” Pete Erickson, climate policy director at the Stockholm Environment Institute, and a coauthor of the Environmental Research Letters study, told DeSmog.

Any subsidy for fossil fuels is counterproductive and the IDC is the single most lucrative federal subsidy that the oil industry receives, according to Erickson.

The Democrats have slim majorities in both the House and the Senate, and will need virtually all of their members to vote in lockstep to successfully repeal fossil fuel subsidies. Oil lobbying outfits like AXPC only need to peel off a handful of Democrats in order to keep the federal spigot open.

“The legislative stakes are being turbocharged by ecological breakdown,” John Noel, a senior campaigner with Greenpeace, told DeSmog. Wildfires continue to ravage California. Much of Louisiana is without power after Hurricane Ida. And New York, Philadelphia, and other parts of the northeast just suffered catastrophic flooding. All of those disasters unfolded within days of each other, and come after several months of global climate-fueled catastrophes, ranging from floods in China and Germany, to wildfires in Siberia.

As climate disasters like these continue to mount, it is creating “a visceral rage at the fossil fuel industry because it’s common knowledge now that they are the stakeholders that are standing in the way of rapid progress and they have delayed action in order to preserve their short-term profits,” Noel said. “They’re losing their grip on the narrative. When they do finally lose their grip totally, the backlash is going to be intense and it’s going to be swift.”

Noel pointed to the federal support for fracking, adding: “If there was ever a moment in the history of fossil fuel production to close these tax loopholes it would be right now.”