Recently, award-winning science journalist, Peter Brannen penned an informative twitter thread (Figure 1) on how Earth scientists know what they know about Earth’s deep-past climates. He wrote it as an addendum to his recent article in The Atlantic, The Terrifying Warning Lurking in the Earth’s Ancient Rock Record, which offers a backwards march through geologic time. Each leap back through the last 56 million years reveals a world growing warmer and warmer; each leap, a signpost for our own possible future journey. 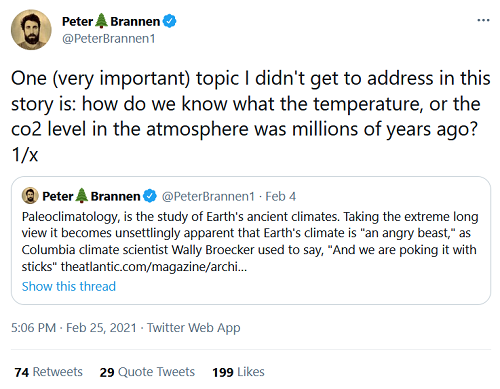 His twitter thread explains some of the numerous ways geologists use to discover when and how past climates changed, namely, by teasing out various biogeochemical clues left in ice cores, deep-sea sediment cores, and other rock records. Readers of Skeptical Science are probably familiar with the CO2 record which reaches back ~800,000 years (Figure 2).  These are direct measurements of CO2 taken from bubbles of ancient air trapped in Antarctic ice sheets. We can also measure the methane (CH4) levels directly from the bubbles. But to get a record of past temperatures, or to go further back in time to find more ancient CO2 levels, we need to use indirect methods, or proxies, where one thing stands-in for another thing. 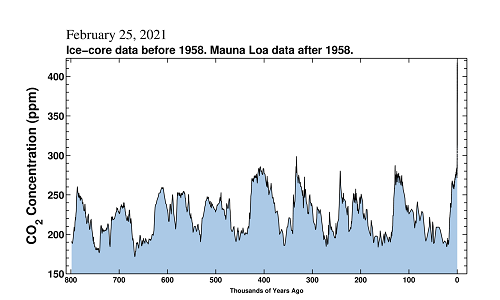 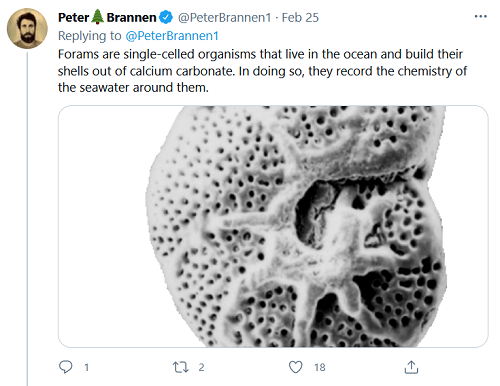 Figure 3. The ubiquitous and versatile foraminifera.

One paleo proxy thermometer highlighted by Brannen involves the ratio of oxygen isotopes found in ancient, one-celled sea-life called foraminifera, or forams (Figure 3). They build their shells from sea water and other elements in their environment. When they die these shells rain down to the muck at the bottom of the ocean. Deep-sea cores taken from this sediment offer a contiuous history of ocean life through the ages. The ratio of heavy to light oxygen isotopes found in forams records the ratios of these isotopes in the sea water. And the ratio found in sea water is used as a proxy for ancient temperatures, as Brannen describes:

The abundances of different oxygen (and hydrogen) isotopes in seawater can tell us a lot. Water made more out of light isotopes is literally lighter, & so evaporates more easily. Ice sheets, which are made of snow that once evaporated as water from the ocean, are made out of this lighter water. If more and more of this lighter water gets deposited on the land as ice sheets it leaves behind heavier water in the ocean. Forams record this change. What’s amazing is by looking at ratio of 16O:18O in foram shells you can reconstruct how much ice there is elsewhere on [the] planet. But the temperature of the seawater (and other ocean chemistry) also affects this ratio. So, using all this info, you can reconstruct the global temperature as well. And luckily, we have deep-sea sediment cores filled with fossil forams going back over a hundred million years.

And from deep-sea sediment cores again, long chain molecules of organic carbon made by ancient life ends up in deep-sea floor muck. Just like oxygen there are lighter & heavier isotopes of C, and photosynthesizers prefer the lighter stuff, but can’t be as choosy when CO2 is low. And the chemistry of elements like boron in seawater responds to the pH of the ocean, which is itself a function of CO2. Once again, forams from deep-sea sediment cores record these ancient ocean chemistry changes.

There are many other proxies scientists use to discover what the world was like eons ago, and to help us understand what we might expect as our own climate continues to change. Take a look at Brannen’s twitter thread to see more examples of these. I’ll end with his last, somewhat frightening, tweet showing that the size of ancient creatures can also be used as a proxy for temperatures (Figure 4). 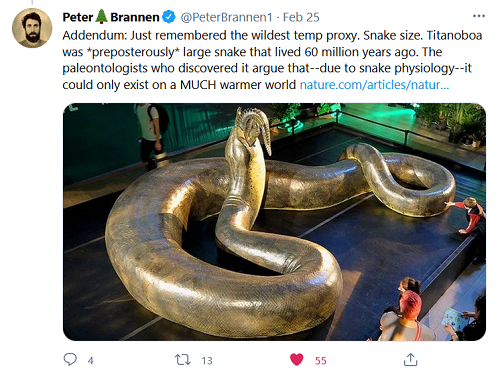 I highly recommend Brannen’s striking book The Ends of the World if you would like to learn more about Earth’s past, specifically, about the Big Five mass extinctions, which offer clear warnings about our own possible future in a continuously warming world.