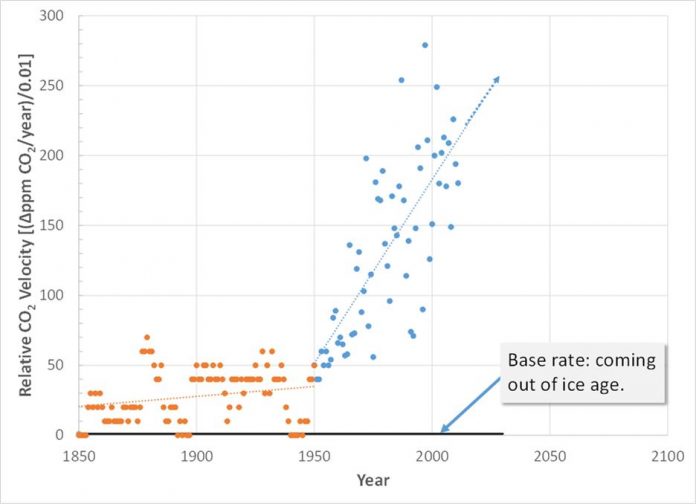 For 1 million years life on earth has adapted itself to going into and out of ice ages over approximately 100,000-year cycles. We come out of ice ages in about 10,000 years, with CO2 rising 100 ppm in that time. That is a rate of increase of about 0.01 ppm/year. If we use this as a typical rate to which nature has adapted, and has done so already for at least 10 cycles, then we can determine how much faster than this we are now moving. The idea is that if we limit CO2 rise to this rate, we expect nature will adapt; the further away we move from this base rate the more difficulty nature will have adapting.

To get some perspective on how rapidly CO2 is currently increasing relative to the base rate coming out of ice ages, we define V_CO2 as the annual rate of increase of CO2 relative the rate of increase of 0.01 ppm/year. By this definition V_CO2 = 1 corresponds to the rate at which we come out of an ice age. A value of 10 means we are pushing nature 10 times faster than this base rate. If we use the start of the industrial revolution as the beginning of rapid CO2 rise, we can divide the data into two groups: pre- and post-1950. Plotting linear functions to V_CO2 for each group yields the following plot.

Climate Change climatechange - September 15, 2022
0
It isn't every day that we learn something that fundamentally changes how we understand our world. But for volcanologists across the globe, such a...