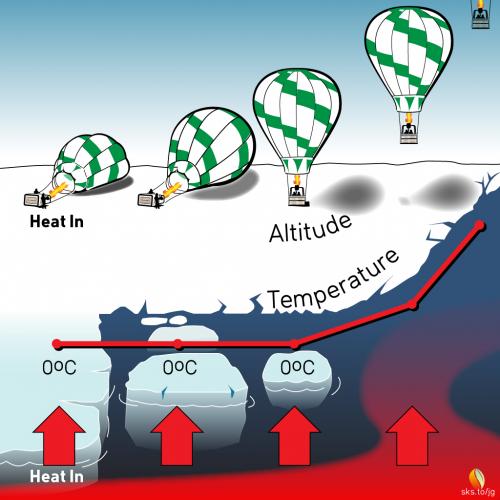 Even on a hot day, as long as your glass of tea has ice it is a nice, cool drink. Only when the ice disappears does your drink start to warm up.

The height of a balloon above the ground is not proportional to the amount of hot air you put into the envelope.1 In fact, when you first start filling a balloon all that happens is that the hot air causes the envelope to lift off of the ground, applying tension to the basket and its occupants, but there is no upward motion of the balloon at that point. You pump in more and more hot air, and if select US Senators were standing by they would likely proclaim that there is absolutely no effect of hot air on the balloon.

The problem, of course, is that a huge amount of hot air must be injected into the balloon just to overcome the weight of the envelope, the basket, and its occupants. As long as the upward force is less than the downward, restraining force, nothing happens. But once the upward force overcomes the downward force, up you go, and any small addition of hot air2 at this point causes you to accelerate faster and faster skyward.

Ever wonder why you put ice cubes into your water and not cold rocks? The difference between ice and rocks is that the temperature of a cold rock will slowly increase along with the liquid it is trying to keep cold, and will do no better keeping the liquid cool than the cool liquid itself. Cold rocks do nothing to keep your drink cool.

However, ice is effective because as long as there is ice in your glass, the combination of ice and tea will stay near 0°C. As soon as the ice melts and is completely gone the temperature of your tea starts to rise, and soon your drink becomes warm and tasteless. We have all used ice in our drinks, but likely without ever realizing that the reason for using ice is that by definition, the temperature of ice cannot rise above 0°C, whereas a cold rock will easily warm up past 0°C. So if there is ice in your glass, it stabilizes the temperature to near 0°C. Read on in the next section to learn about the property of ice that keeps your ice tea near 0°C.

In the last 40 years we’ve lost about 50% of the Arctic ice area and about 70% of the volume.3 Time to ask Earth’s bartender for more ice for our drink, lest the temperature of the Arctic becomes too warm.

If ice keeps your drink near 0°C, do you suppose ice has a similar effect of keeping the Arctic ocean at the North Pole near 0°C? What happens when the ice is gone and the oceans start to warm up past 0°C? Ice is like an anchor because as long as there is ice in the water, it keeps the temperature at reliably stable, cold temperatures. The equatorial regions of the Earth are at reliably warm temperatures. The difference between these two reliably consistent temperatures produce global winds (e.g., jet stream) that blow in consistent patterns. Once the ice is gone in the Arctic, the temperature of the Arctic starts to rise,4 and the stabilizing force anchoring the Earth’s large-scale winds (i.e., the jet stream) begins to waiver, so that instead of having well-anchored, well-behaved winds, we inherit poorly-anchored winds that blow more erratically. This is part of the cause of the Polar Vortex dipping further down south than we’re used to. Weather patterns and hurricanes getting stuck and causing torrential rains may be linked to the jet stream slowing down and meandering more.

There is a special property of solids when they melt called the latent heat of fusion. It’s a fancy term that can be easily illustrated as follows. Start with a chunk of ice at -10°C. Add a little heat and the temperature will quickly rise to 0°C, at which point the temperature stops rising. Ice made from pure water cannot exist at 1°C: only at 0°C and colder.  At 0°C a phase change occurs, meaning that the solid ice starts to melt. It takes a lot of energy! Lots of energy to melt ice, and while the ice is melting, absorbing huge quantities of energy, the temperature of the ice does not change. This is one of the absolutely amazing properties of stuff as it changes from a solid to a liquid. In fact, ice absorbs so much energy while it’s melting, that the energy required to melt 1 kg of ice is enough to raise the temperature of 1 kg of water by 80°C!

Think of the difference between the energy needed to warm something up vs the energy to melt something (i.e., the latent heat of fusion) this way. You’re walking along and you come to a small hill. It takes you extra energy to walk up this small hill, but not that much extra. Maybe you huff and puff a bit and start to sweat, but overall you climb the small hill with no problem. This is similar to the energy needed to warm something up. Now imagine that someone strapped wings onto your arms and you try to fly. This is your “phase-change” event, in that you are going from being bound to the solid ground to being airborne. If you were strong enough to make the wings work, you would find that it takes a lot more energy to get yourself off the ground than it does to walk up the small hill. Now assuming that you were able to get yourself airborne and keep yourself there, you would find that the extra energy it takes to rise up further into the air is small compared to the energy it took to get airborne in the first place. The point is that the energy to warm up a solid, a liquid, or a gas is small compared to the energy required to change a solid to a liquid (i.e., melting) or to change a liquid to a gas (i.e., evaporation). And even though it takes you lots and lots of energy to get airborne, your elevation does not change much at all. If you put that same energy into walking up a hill, you could climb very high up for the same amount of energy.

Part of the deceptive problem with global warming is that most people focus on air temperature only, and if it has not increased too much over a 10-year period, they say that global warming is not happening or that it is not too bad. What is missed in this analysis, however, is that the energy is still going into Earth’s system, but much of the energy is being used to melt ice or evaporate water (evaporation is another phase change from liquid to vapor that absorbs even more energy than required to melt ice). This ice melting continues until the global temperatures increase to a certain level, because the switch that stops global warming is radiation, which is a process that is controlled by temperature. With a given amount of GHGs in the atmosphere, heat will continue to be pumped into Earth’s system until the temperatures rise enough for radiation to shut down additional warming. Until that point we continue to melt ice, which is a slow process. But once ice in a particular area of the Earth is gone, the temperature of that area will rise much faster, because with the ice gone, the water that remains increases in temperature more quickly than when the ice was present.

1. This is the part of the balloon that holds the hot air or helium.

2. Obviously you must continue adding some hot air to make up for the cooling of the gases.

3. See the NASA data set and this video animation of sea-ice volume decrease.

4. Because the Arctic is a large area, the temperature will only be moderated by the ice where ice remains. Where ice has already melted the temperature is not mitigated by the effect of the ice and the temperature will rise. Therefore, the idea is not that the temperature of the entire Arctic will remain near 0°C as long as there is some ice remaining, because areas that have become ice free will begin to warm more rapidly, without the restraining effect of ice. The actual physics is more complicated and depends on Ocean and Atmospheric currents, but the general idea is similar to what happens in a glass of ice tea.

5. This discussion is for pure water at atmospheric pressure. For salt water the freezing point is a bit colder, near -2°C, and an equal mixture of ice, water, and ammonium chloride freezes at -18°C, which is used to define the 0 point of the Fahrenheit scale.