A slowdown in the Atlantic Ocean current bringing warm water up to Europe from the tropics could trigger “a period of rapid global surface warming”, a new study suggests.

The research, published in Nature, says that a recent weakening of the “Atlantic Meridional Overturning Circulation” (AMOC) is coming to an end, but will stay at a “prolonged minimum” for the next two decades.

This would see relatively low levels of heat uptake in the Atlantic Ocean, thus boosting rising temperatures at the Earth’s surface.

The indirect “proxy” data used to analyse the AMOC suggest that its weakening is part of a natural cycle, rather than being caused by human-caused warming – as had been proposed by two studies published earlier this year.

However, researchers not involved in the study warn that it is “debatable whether such strong conclusions” about the AMOC can be drawn using proxy data, rather than direct observations.

The AMOC is a system of currents that brings warm, salty water in the upper layers of the ocean up from the Gulf of Mexico into the North Atlantic. It then sends cold, more dense water back again in the deep ocean on a constant conveyor belt.

This conveyor plays a crucial role in western Europe’s climate as the incoming warm water releases heat into the atmosphere. Without it, for example, UK winters would be around 5C colder.

Recent research has suggested that the AMOC has weakened by around 15% since the middle of the 20th century. This could lead to considerable changes in climate and rainfall patterns throughout the northern hemisphere.

But, the new study notes, such past changes happened before humans started pumping billions of tonnes of CO2 into the atmosphere. For example, the researchers suggest the AMOC was in a “weak” phase between 1975 and 1998 – yet global surface temperatures rose rapidly during that period.

As the AMOC has only been monitored directly and continuously since 2004, the study uses a series of “proxies” to infer changes in AMOC strength back to 1945.

These proxies include measurements of ocean temperature and salinity, as well as observations of sea surface height from satellites and tide gauges. Taken together, these proxies “paint a consistent picture” of changes in the AMOC, says co-author Prof Ka-Kit Tung, professor of applied mathematics and adjunct professor in atmospheric science at the University of Washington.

The researchers theorise that human-caused warming has essentially changed the principal role of the AMOC from shifting heat northwards to storing heat in the deep Atlantic.

When the AMOC is strong, there is more warm, salty water in the North Atlantic and the subsequent sinking transports more heat to the deep ocean. This lessens human-caused warming at the Earth’s surface, the researchers say. During periods of weak AMOC, less heat is being shifted into the deep ocean, and so more stays at the surface and temperatures rise rapidly.

This is illustrated in the charts below. The coloured lines in the upper chart show the different proxies for the strength of the AMOC since 1945 – and the inset shows the direct measurements from the RAPID project since 2004. The lower chart shows the variations in global surface temperature (black line) from 1850. 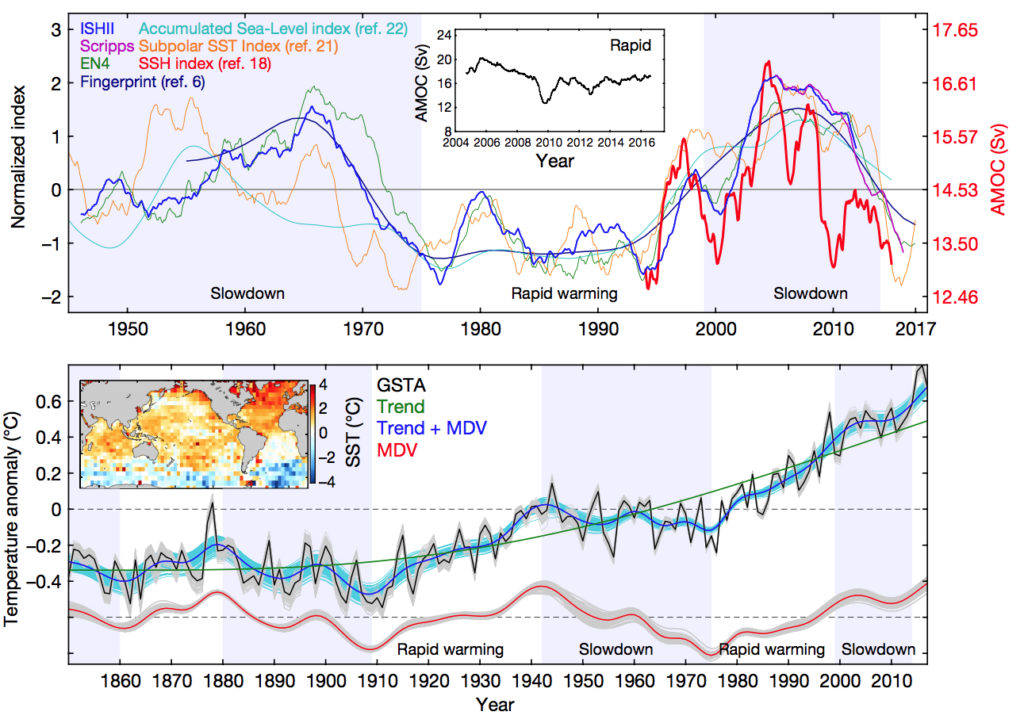 Since 1945, the AMOC has gone through several phases, the researchers say: a strong AMOC up until the mid-1970s, then a weak phase up to the late 1990s, and another strong phase until the mid-2010s. These three phases coincide with periods of slower and faster global surface warming, the study says – showing how the AMOC can suppress or enhance human-caused warming.

The strong AMOC phase in the early 2000s, for example, was partly responsible for the much talked-about slowdown in global surface temperature rise, Tung tells Carbon Brief:

“The other partner is the Southern Ocean. Together they account for 70% of the heat that was stored away from the atmosphere. With more heat stored away at depth in the oceans, less is available to heat the surface, so surface warming slows.”

The AMOC has since weakened rapidly – as has been observed in the RAPID data – and global temperature rise has swiftly resumed.

The proxy data suggest that the weakening of the AMOC is coming to an end, but will stay in a “prolonged AMOC minimum” that will last around two decades. Tung explains:

“If past patterns hold, then we are entering into a flatter minimum. AMOC will stop declining for a couple decades. During this time, surprisingly – which is a new finding of our work – surface warming will actually be more rapid.”

Two studies on the recent weakening of the AMOC, published in Nature in April, linked the shift to rising global temperatures and melting of the Greenland ice sheet.

The theory goes that meltwater from the Greenland ice sheet – along with melting Arctic sea ice and greater rainfall over the North Atlantic – causes an influx of freshwater into the ocean. This extra freshwater reduces the sinking of the cooling seawater, reducing how much warm water is dragged up from the tropics, thus weakening the circulation.

But the new study proposes that changes in AMOC are actually part of a natural cycle over multiple decades, with peaks and troughs over the past 60-70 years. Tung explains:

“The peaks are sharper. The trough, where AMOC is the weakest, is more flat and lasting longer – about two or three decades – followed by a rapidly increasing AMOC – 12-13 years – and then a rapidly decreasing AMOC – 13 years – from the sharp peak.”

However, as their proxy record only goes back to 1945, there is only one full AMOC cycle to base future projections on, notes Tung:

“We have only one cycle, so some caution is needed in describing it as a natural cycle with a certain period, because we do not even know if it is periodic. However, it does not look like it is an anthropogenically forced downward trend, because there were ups and downs in the AMOC strength.”

Tung and his co-author propose that the cycle is driven by a “self-reinforcing feedback”. A strong AMOC transports more warm water up to the high latitudes of the North Atlantic, where it helps melt glaciers and sea ice and – over decades – adds freshwater to the surface waters. This then slows the sinking of cold water, thus weakening the AMOC. Eventually, this pattern reverses again, explains Tung:

“When AMOC is slower, it transports less of the warm water northward, ice melt decreases and freshwater output decreases. The seawater becomes more saline gradually, and more sinking then resumes.”

However, while proxy data studies “broadly agree” that the AMOC has swung between strong and weak phases over past decades – and some suggest a long-term weakening trend – they “differ in the details”, says Dr Jon Robson, a senior research scientist at the University of Reading, who was not involved in the study. He tells Carbon Brief:

“We are also still largely in the dark about whether [the recent AMOC] changes are all natural variability or whether human activity has had an influence.”

One of the main caveats of the study is that the lack of a long-term record for AMOC, say Dr Gerard McCarthy and Prof Peter Thorne from Maynooth University in Ireland in an accompanying Nature News & Views article:

“By necessity, the authors used proxies for AMOC strength because no direct observations of sufficient length exist.”

This is a common problem, says Prof Meric Srokosz, professor of physical oceanography at the National Oceanography Centre in Southampton and science coordinator of the RAPID project. He tells Carbon Brief:

“It is debatable whether such strong conclusions as the paper draws regarding the behaviour and influence of the AMOC can be drawn based on proxies that are not verified against observations over multidecadal timescales of interest.”

Scientists need observations of the AMOC over several decades to unpick its long-term influence on global climate and ocean heat storage, adds Srokosz. With regard to this and other studies using proxies for the AMOC, he notes that:

“The bottom line is, without long-term observations to verify the proxies over the time scales of interest, no proxy reconstruction of the AMOC can give definitive answers to the questions about past and future AMOC changes.”