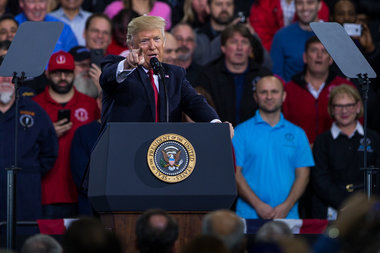 “You can see positive feedback from the auto industry, because that’s what they believed was going to happen, so it’s an opportunity to make sure they can stay as competitive as possible providing great products for our citizens,” Snyder said.

Comparing Trump’s look at regulatory reform to his own initiatives to reduce unnecessary regulations in Michigan, Snyder said continuing to examine the value of existing regulations at the federal level could be worthwhile.

“It’s not about eliminating everything, but making them smarter and better,” Snyder said.

During an 18-minute talk at the American Center for Mobility Wednesday, Trump focused on his intent to withdraw a final determination on the feasibility of vehicle emissions rules set by the Environmental Protection Agency days before former President Barack Obama left office.

The current rules give automakers a fuel efficiency target of 54.5 miles per gallon by 2025. On Wednesday, Trump said he would reinstate a review of that target in 2018 to determine the feasibility of hitting that goal.

Trump drew plenty of cheers from the crowd as he spoke of rebuilding American manufacturing and restoring respect for autoworkers.

“We want to be the car capital of the world again,” Trump told the crowd.

Other politicians who attended Wednesday’s event included Michigan Attorney General Bill Schuette and state Sen. Pat Colbeck, R-Canton. As part of his trip to Michigan, Trump met with several automotive executives and union members and took a brief tour of the American Center for Mobility facility.

Great to be with @POTUS today in Ypsilanti. pic.twitter.com/8CncDTyxGF

Hundreds of protesters also gathered outside the venue to protest Donald Trump’s first visit to Michigan as president. Several Trump supporters also showed up to cheer on the president outside, including Trump supporter Rob Cortis, who made the drive from Livonia with his “Trump Unity Bridge.”

Michigan Republican Party Chair Ron Weiser said it was great to have Trump in Michigan, adding that the President is working to fulfill the commitments he made during the campaign cycle.

“I thank the President for coming to Michigan, listening to Michigan workers, Michigan companies, and committing once again to them that he will be their advocate in Washington,” he said.

“We must not return to the unworkable patchwork of state and federal standards that the original agreement was tailored to prevent,” he said in a statement. “We need to continue to pursue a collaborative effort to ensure the best outcome for consumers, the environment and the auto industry.”

Democratic Congresswoman Debbie Dingell, D-Dearborn, said in a statement that while she supports the standards agreed to under the Obama administration, she supports going through with the review process.

“Everyone involved needs certainty – from automakers building more fuel-efficient vehicles to the companies developing infrastructure to support them,” she said. “As the process moves forward, it is important for all stakeholders to ensure there are strong, workable standards in place that achieve the goals of the original agreement while keeping everyone together on one set of standards.”