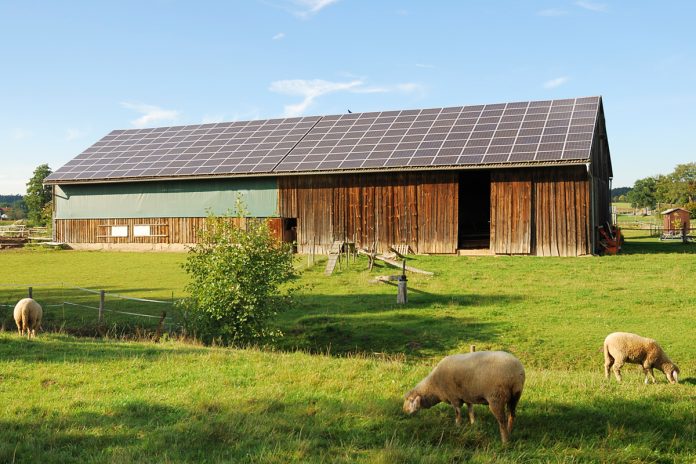 By now, most Americans have heard of solar farms. But how about solar farmers?

A quarter of California farms, nearly 2,000 altogether, are generating onsite solar energy, making it far and away the national leader, according to a 2011 report by the U.S. Department of Agriculture (USDA) outlining the use of solar on farms. Hawaii, Colorado, and Texas count over 500 farms producing solar power, while Washington, Oregon, New Mexico, Arizona, and Montana have over 200 each.

But how farmers are solarizing that land has become a point of contention. While some have chosen to install solar panels, pumps, coolers, heaters, and more to decarbonize their farm operations and downsize costs, others—sometimes controversially—have stopped planting crops altogether in favor of solar farms.

Solar on the Farm

Since 2010, the cost of installing solar on homes and businesses has plummeted by more than 50 percent. In recognition of the fact that farms are often both homes and businesses, the Solar Energy Industries Association last year published a guide to help farmers and others transform “unused or underused land into revenue-generation opportunities.”

Today, agricultural operations across the country are using solar to offset their costs in a variety of ways. The USDA report noted that a family-owned dairy in Maine installed one of the largest commercial solar thermal systems in the northeastern U.S. on its roof, reducing its heating oil costs by $14,000 to $20,000 a year. A cattle ranch in North Carolina installed a solar-powered pump to supply water to its herd of calves and cows. A sheep-farming family in New York installed a solar hot water system that covered more than half of its hot water needs.

The list goes on and on. A California almond sheller solarized his 45,000-square-foot processing facility, offsetting 90 percent of his operation’s electricity usage during the state’s destabilizing drought. A central Illinois corn and soybean farmer installed a ground-mounted solar array to zero out his electricity costs. A couple farming corn in Nebraska installed 36 panels to cleanly power their workshop, which uses more energy than their entire home.

Out of America’s top 10 farm states, North Carolina (surprisingly) and California (unsurprisingly) have managed to install America’s largest solar capacity, with 2,866 megawatts and 10,577 megawatts, respectively. They are certainly not alone.

“Iowa and North Carolina have been particularly compelling stories,” explained Karlee Weinmann, a researcher at the Institute For Local Self-Reliance (ILSR). “They have had a focused effort on solar, in terms of feeding their states’ clean energy economies, as well as responding to farmers and others in the agricultural industry who express interest in renewable generation.”

“The prevailing reasons farmers decide to replace crops with solar are because the farmers are getting older or because it’s easier and more lucrative,” said Weinmann. “They’re principally motivated by risk aversion, and less inclined to want exposure to the volatility that might come with a more traditional crop. Risk is a significant part of the calculus in their decisions, at least in the cases I am aware of.”

In 2015, the USDA helped solve this calculus when it announced the Rural Energy for America Program (REAP), freeing up $280 million in loans and grants to help “farmers, ranchers, business owners, tribal organizations, and other entities incorporate renewable energy and energy efficiency technology into their operations.” With another round of funding due to close on March 31, the USDA’s REAP program has so far proven to be a notable success, especially in more traditionally powered states where some might not expect solar to take off.

“It has been very popular in North Carolina,” said Lisa Noel, the state’s USDA rural development energy coordinator, who explained that solar has traditionally been awarded most of North Carolina’s REAP funding.

North Carolina farmers variously deploy REAP funds to purchase solar pumps, install panels on chicken coops to reduce energy costs, and more, added Noel. “We see a lot of farms lease their land to solar developers for large projects that are tied to the grid. The land does not have to come completely out of agricultural production. Farmers can plant blueberries, and graze certain livestock like sheep. But compared to raising crops, solar [provides] a consistent income for farmers.”

Solar Pays its Way, Which Can be a Problem

Solar’s potential to supplement farming income by displacing crops from farmland is where the controversy has come in.

Last year, the North Carolina Sustainable Energy Association explained that solar companies are paying almost triple the state’s average rent for crop and pasture land, a no-brainer valuation not just for farmers looking for extra funding, but any environmentalist seeking to decarbonize agricultural operations, which currently are the second largest contributor to greenhouse gas emissions after energy production.

Twenty-four million acres of agricultural land have been lost to development since 1982, and with this context in mind, some policymakers aren’t too happy about solar’s agricultural growth. In Connecticut, Republican Senator Craig Miner recently proposed State Bill 412, which restricts, without explanation, the use of incentives for development of solar arrays on farmland.

“The free market, absent some moratorium, is going to continue to eat away at farmland and eat away at forestland,” Miner told the Connecticut Mirror.

Pushback on solar farming at the local level is garnering headlines beyond Michigan. In Washington, Kittitas County extended a moratorium on commercial renewable energy facilities through July. And while North Carolina has become a national solar leader, that hasn’t stopped Currituck County from issuing an outright ban on solar farm construction.

Concerns from some in the agriculture world arise when farmers start to take advantage of solar’s lower-risk, higher-reward opportunities and pull out of farming entirely. Prime among the examples is none other than President Jimmy Carter, who famously added solar panels to the White House in the 1970s. Earlier this year, Carter converted part of his fabled peanut farm into a large-scale community solar array.

A North Carolina farm family also decided against replanting a 47-acre, water-intensive cotton field, in lieu of renting their land to a solar developer for the local market rate, likely $500-$600 an acre annually, although terms weren’t disclosed.

Part of the uncertainty around farm-based solar comes from the patchwork of regulations, incentives, and tax credits that nationally and locally shape the solar market. A state like Connecticut, which earns high marks for its overall policies, can still fall short in some of the policy areas that make solar desirable.

That said, inconsistent local and national regulations and incentives—as well as a surprising American election outcome seeming to favor coal, oil, and gas—may not be enough to stop the growth of solar energy. “The patchwork of net metering incentives, state by state, is in flux,” Bloomberg New Energy Finance solar head Jenny Chase told PV Magazine, “but solar often has bipartisan support at the state level.”

Farmers to Detractors: Lead or Get Out of the Way

While farmers have worked, and sometimes wrestled, with everyone from state officials to entrenched utilities to decarbonize their operations and stabilize their earnings, they have also planted the seeds of tomorrow’s renewable energy agriculture infrastructure, despite the odds.

“One overarching trend hanging over the entire electric industry, in rural and urban areas, is that utilities are pretty resistant to the growth in solar that we have seen and expect to continue seeing,” ILSR’s Weinmann explained. “They find ways of imposing fees that make solar financially infeasible, and such policies definitely expose a tension between customers who want to pursue onsite generation and utilities reluctant to lose the dollars that come with electricity sales. In many cases, utilities are very unwilling to adapt to the marketplace.”

But examples of solar success continue proliferating. Total installed solar capacity is expected to triple over the next five years, and it would be foolish to think that farmers will not want to be a part of it. From greening their portfolios and operations to mitigating climate change, most farmers see themselves as part of the solution.

“Solar makes financial sense for farmers,” Weinmann concluded. “Farming is not an easy business to be in, and it hasn’t really ever been. Solar is a way to buttress that business in a way that also serves the purpose of making our energy economy much cleaner.”