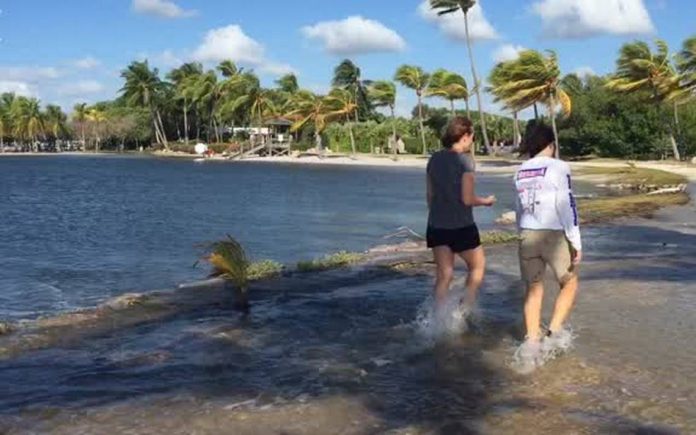 Based on new evidence, the Arctic Council — a cooperative effort among eight nations to monitor climate change — concluded that the Arctic warmed faster between 2011 and 2015 than any time on record, with glaciers and sea ice melting faster than expected. That means a United Nations estimate for sea rise, considered among the most conservative, could be off by as much as 10 inches.

Along the Eastern Seaboard, and South Florida in particular, we get an excessive rise.

“Along the Eastern Seaboard, and South Florida in particular, we get an excessive rise,” he said.

The study joins a growing catalog of new research showing more dire conditions than projected — and increased calls for the U.S. to not back out of the 2015 Paris Agreement that commits nearly 200 counties to check global warming.

Because the Earth takes time to respond to changes, scientists keep a close eye on trends. In the Arctic, they are already seeing worrisome changes in migratory patterns and increased algae blooms. Among the worst is meltwater from glaciers, ice sheets and ice caps that account for a third of the planet’s sea rise. Seventy percent of that comes from Greenland, which lost 375 gigatons of ice between 2011 and 2014, the report noted. Since 2000, melting ice from the continent totaled enough to raise sea levels globally by about four tenths of an inch, according to the report which relied on the work of 90 scientists.

With what’s already baked into the atmosphere, faster melting land ice will likely add between 7.5 and 9.8 inches to earlier U.N. estimates by 2100, the report said.

And because of its position downstream, in an area of “preferential excitement,” South Florida could experience rise at the high end as water sloshes around the planet, Kirtman said.

“Think of it as pushing down the ocean [in Greenland]. The ocean is fluid, so it’s going to respond somewhere else and that somewhere else is down here,” he said.

In South Florida, planners already confronting flooding from sea rise have been more aggressive in assessing sea rise than the U.N.’s Intergovernmental Panel on Climate Change, which sought to get a consensus among about 400 scientists.

The Southeast Florida Regional Climate Change Compact includes the IPCC’s conservative assessment calling for six inches in sea rise by 2030 and 31 inches by 2100. But it also uses higher estimates by the U.S. Army Corps of Engineers and National Oceanic and Atmospheric Administration that call for sea rise by 2030 of 10 and 12 inches, respectively, and 61 and 81 inches by 2100.

Climate science is constantly evolving and undoubtedly there will be things we need to consider.

“Climate science is constantly evolving and undoubtedly there will be things we need to consider that are coming out that are significant,” she said.

The latest projections have only been in place a year and rather than undertake complicated calculations with every report, the compact prefers to update estimates every three to five years, she said.

“That would allow us to be more contemplative of a number of reports,” she said.

Kirtman, however, who was the lead author in the IPCC’s 2014 report on near-term climate change projections, said the alarming arctic trends should serve as a warning.

“I view the process in the arctic as the canary in the coal mine. So every time it comes out more surprising, it is more alarming,” he said. “We’ve committed to another 30 years of continued warming. However, if you implement some strong carbon reductions, and follow the Paris accord, we can prevent that six to eight feet by 2100. What we’re not going to prevent is another foot by 2035.”