Home Science Mitigation The electric, driverless revolution is about to hit the high seas. 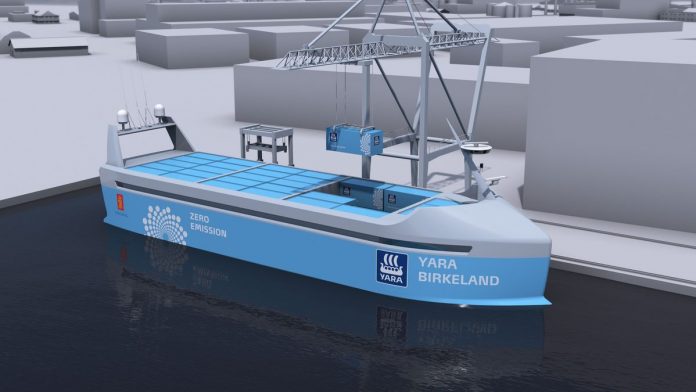 It’s not just in Google laboratories that the revolution in electric, driverless transportation is gathering pace: a Norwegian shipping company is aiming to be able to deliver cargoes by sea on unmanned vessels from 2020.

The fully electric, zero emissions YARA Birkeland will set sail next year in Europe, Oslo-based Yara International ASA said a statement Saturday. By 2019 it will be able to work by remote control and at the start of the next decade it will be able to deliver on a fully automated basis. The container ship, being built by Kongsberg Gruppen ASA, will transport fertilizer.

Exclusive insights on technology around the world.

Get Fully Charged, from Bloomberg Technology.

A breakthrough by Yara could have far-reaching implications for the maritime industry, which has historically consumed the dirtiest fuels available from refineries. On land, automakers are boosting their efforts to develop driverless vehicles alongside electrification. Ford Motor Co., Bayerische Motoren Werke and Volkswagen AG have said they aim to develop driverless cars by the early 2020s, while Google’s sister company Alphabet Inc. is testing technology already.

Yara uses more than 100 diesel truck journeys a day to haul products from its Porsgrunn plant, in Norway, to the domestic ports of Brevik and Larvik from where it ships to customers around the world, said Svein Tore Holsether, the chief executive officer of Yara.

Yara estimates that the new vessel will reduce truck-powered haulage by 40,000 journeys a year, although the journeys in question — between Norwegian ports — are a fraction of those taken by conventional international shipping. The company’s shares rose 7.7 Norwegian kroner to 322.8 kroner, on Monday.

While shipping lanes contain less traffic than on-land roads, maritime trade still comes with its own complications that will provide challenges for automation. Those include strong ocean currents, bad weather and — in some parts of the world — piracy.

The new vessel will allow Kongsburg to test out new technology that could ultimately curb pollution from the shipping industry, which accounts for about 2.3 percent of global emissions. The International Maritime Organization plans to release an initial plan next year to cut greenhouse gases as the industry isn’t included in the landmark Paris Agreement on climate change.