Home Science Energy The winds of resistance are spreading across America. 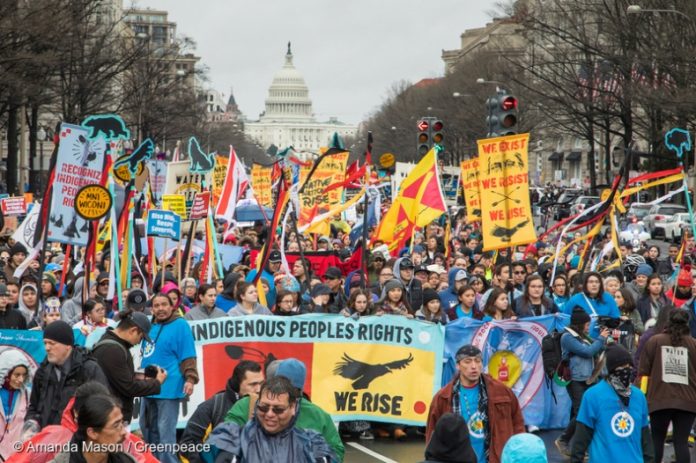 The winds of resistance from Standing Rock blew into Washington D.C. last week, as indigenous leaders brought their demands directly to the door of the Trump administration.

The Standing Rock Sioux Tribe, indigenous grassroots leaders, and allies marched on the U.S. Capitol March 10 to defend their natural rights to protect Mother Earth and our water. In addition to requesting continued solidarity from indigenous brothers and sisters from around the world, they demanded that Trump meet with tribal leaders and that their tribal rights, including the rights to sovereignty and consent, be upheld in the face of corporate interests.

The Native Nations Rise march was a powerful call to action and emblematic of the renewed momentum behind the movement for indigenous rights in the fight against oilsands pipelines expansion.

The Native Nations March participants head down Pennsylvania Avenue with the U.S. Capitol in the background on March 10, 2017. Photo by Amanda Mason, courtesy of Greenpeace

Here in British Columbia, indigenous opposition to Kinder Morgan quietly (to the outside world) recently reached an important milestone, too. On February 16, the Union of British Columbia Indian Chiefs (UBCIC) met and committed to finding a way to ban bitumen in their territories.

I attended this summit and was honoured to make a presention to them on the impacts of oilsands pipelines. In 2011, I watched my own community of Little Buffalo, Alberta, deal with the aftermath of the province’s second-largest pipeline spill. Community members, including small children, experienced nausea, burning eyes and headaches after a leak of nearly 30,000 barrels which leeched into the muskeg, a bog ecosystem connected to all the water in the region, supporting life over thousands of years.

The UBCIC resolution reiterates endorsement of the Coastal First Nations Tanker Ban and the United Nations Declaration on the Rights of Indigenous Peoples, acknowledges the legal proceedings begun by 14 indigenous communities against Kinder Morgan, and calls out the flawed National Energy Board approval process.

“Diluted bitumen contains toxic chemicals that are a threat to drinking water, health, and the well-being of salmon and other beings,” the resolution says.

It further calls on the executive to “work with affected members to seek adequate resources to support its work and engage technical advisors to develop and implement an integrated strategy to oppose the Kinder Morgan Trans Mountain tankers and pipelines project.”

The Union of BC Indian Chiefs will actively take steps to see this through, including “strategies grounded in Indigenous territorial authority,” undertaking financial strategies, focusing on health and water protection, collaborating with indigenous and non-indigenous allies alike, and possible “legal challenges to the federal approval.”

No individuals blocked the resolution.

In response to the threat from Kinder Morgan of noise pollution and a decline in marine environment, the UBCIC further moved to defend orcas, which enjoy federal protection under the Species at Risk Act and Marine Mammal Regulations of the Fisheries Act.

Governments impose conditions on pipeline expansion; so do First Nations

More than 120 First Nations and tribes across Turtle Island have signed the Treaty Alliance, vowing to oppose the transportation of any oilsands oil across their lands and waters. Our movement of indigenous resistance, and the millions of people across these lands and this earth who support it, are growing stronger each day.

But we know that one condition will render this pipeline — all pipelines — impossible: respect for the free, prior and informed consent of indigenous peoples. We do not consent to energy projects poisoning the drinking water, polluting the land, and threatening our oceans. 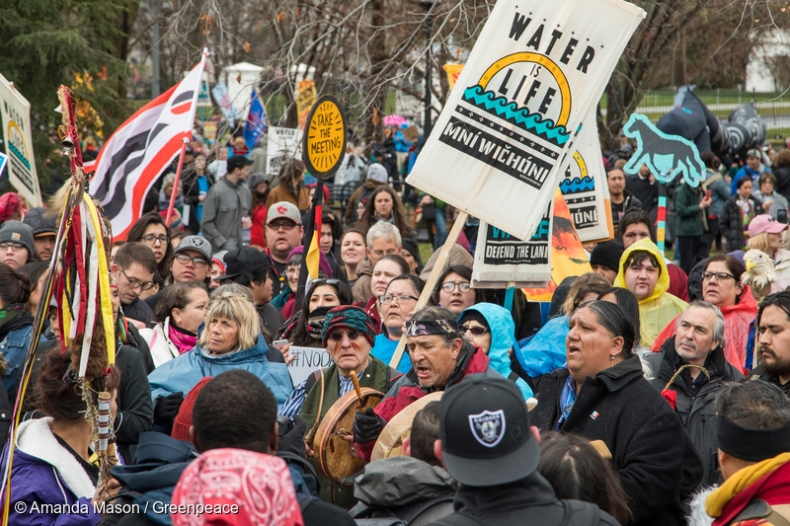 Trump’s Dakota Access pipeline has already come at a terrible price. It’s up to us to hold Trudeau to his promise to honour the Treaties. The spirit of Standing Rock has not diminished; it’s tracking northward as people across Canada act in solidarity with Native Nations Rise, refusing to let attacks on indigenous people for the sake of oil profits go unnoticed.

These winds of resistance in British Columbia and across Turtle Island should be a signal to our governments and to investors. When we rise, we rise as one. A light breeze becomes an unstoppable gale.

Melina Laboucan-Massimo is from northern Alberta and a member of the Lubicon Cree First Nation. She works as an advocate for Indigenous rights and as a Climate & Energy Campaigner with Greenpeace Canada.