Home Politics Climate denial ‘They Are Not Criminals, They Are Heroes’: Campaigners Gather at London Court... 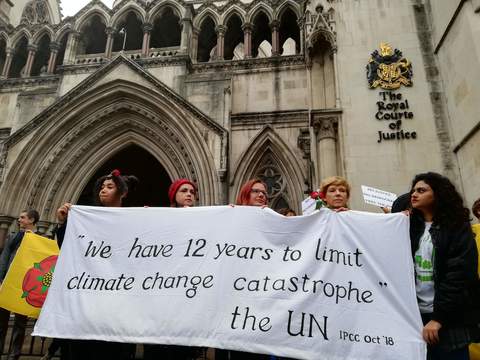 Environmental campaigners converged on the Royal Courts of Justice in support of an appeal against the “excessive” sentencing of three anti-fracking protestors, warning that the case could set “a dangerous precedent that punishes environmental protestors for their beliefs”.

Dozens of campaigners carrying the red rose of Lancashire gathered in front of the court on Wednesday morning to show their support for the appeal case and denounced the sentencing of the three men as “disproportionate”.

Last month, anti-fracking protestors Simon Blevins, 26, Richard Roberts, 36, and Richard Loizou, 31 were sentenced to 16 and 15 months in prison at Preston Crown Court after being convicted of causing a public nuisance offence.  In July, the three men were arrested after they spent between two and four days on top of lorries that were making their way to the Preston New Road fracking site in Lancashire, where Cuadrilla Resources started to frack for shale gas on Monday.

This is the first time campaigners have been jailed in the UK for anti-fracking protests.