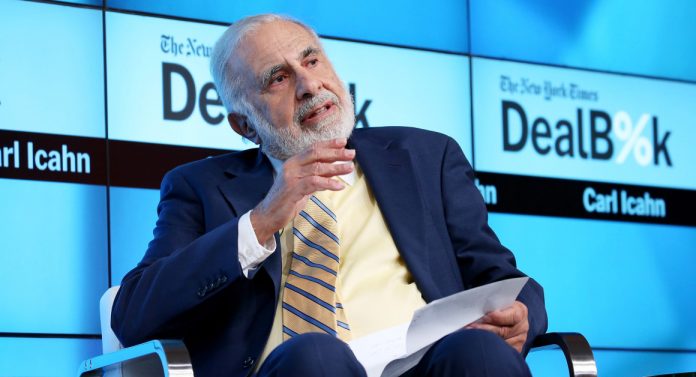 President Donald Trump named Carl Icahn, whose net worth is pegged by Forbes at nearly $22 billion, as the White House’s special adviser for regulatory reform in December. | Getty

Public Citizen contends that Icahn, his company Icahn Enterprises and the CVR oil refining company he owns failed to register as lobbyists, yet pushed the White House to change the EPA’s decade-old rules on ethanol — a move that would save Icahn’s company hundreds of millions of dollars.

Trump named Icahn, whose net worth is pegged by Forbes at nearly $22 billion, as the White House’s special adviser for regulatory reform in December, but said he would “not be serving as a federal employee or a special government employee and will not have any specific duties.”

Icahn has aggressively advocated for the change in the ethanol rules under the EPA’s Renewable Fuel Standard since last year, and according to the Public Citizen complaint, he submitted a proposal to the White House on Feb. 27 to overhaul the program and shift the burden for complying with the ethanol rules to fuel wholesalers. The RFS, which was created by Congress, gives EPA authority to operate the nation’s biofuels program.

The letter to the secretary of the Senate and the clerk of the House calls for an investigation into whether Icahn and CVR’s activities constitute lobbying of the White House for changes to the program. The complaint also cites Icahn’s work in helping select EPA Administrator Scott Pruitt, and the proposed language he and fellow oil refiner Valero Energy submitted to the White House for a memo that would direct EPA to make the change.

“All of this has occurred with no record of any [Lobbying Disclosure Act] filings by or on behalf of Mr. Icahn, Icahn Enterprises or CVR Energy,” the complaint reads. “It is unlikely that all these activities occurred without some individual or entity being obligated to report lobbying activity under the LDA.”

The letter is latest controversy around the ethical complications that Trump, the wealthy members of his Cabinet and his advisers have faced because of their myriad business holdings.

This story tagged under: