Climate change has driven an “alarming” increase in the number of years with both heatwaves and droughts across the US over the past five decades, a study finds.

The co-occurence of heatwaves and droughts can have “grave implications” for crop production, electric grid reliability and the severity and size of wildfires, the authors say.

The research shows that US dry-hot extremes are “self-intensifying” – meaning more heat causes more drought and vice versa, a study author tells Carbon Brief. They are also “self-propagating” – meaning they are able to move from region to region, he says.

Such conditions provided “the recipe” for the recent record-breaking fires along the US west coast, he adds.

There is lots of evidence to suggest that climate change is affecting the risk of heatwaves. For example, research shows warming made this year’s record-breaking Arctic heatwave 600 times more likely and last year’s Europe-wide heatwave up to 100 times more likely.

There is also evidence to suggest that climate change is making droughts worse – although the impact of warming on global moisture patterns is less straightforward.

The new study, published in Science Advances, looks at how climate change has affected the chances of heatwaves and droughts occurring at the same time within a year. It specifically focuses on the contiguous US.

“Concurrent drought and heatwaves are the most damaging stressors to the agricultural system. If it is hot, you need more water for irrigation and if it is dry, there is no water for that purpose. Three such events between 2011 and 2013 in the US caused more than $60bn in agricultural losses. 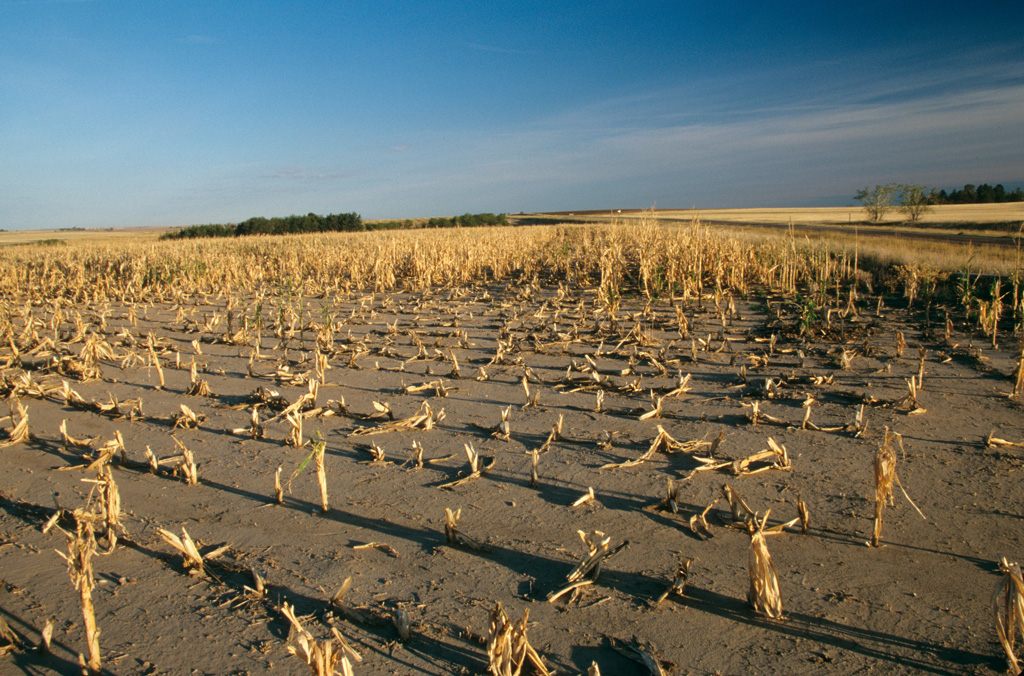 “Compound dry-hot events are also very damaging to forests and can cause large-scale tree mortality, such as what was observed in the Sierra Nevada mountains of California from 2014-2017.”

The research finds that once-rare dry-hot extremes have increased in frequency across much of the US, he says, adding:

“Further, we show that concurrent drought and heatwaves are expanding spatially at an alarming rate, enhancing the likelihood of continental scale compound extremes.”

For the study, the researchers analysed national climate data from 1896-2017 to see how the frequency, size and location of dry-hot extremes had changed over that period.

They defined “dry-hot extremes” as years with exceptionally high levels of both heat and drought. 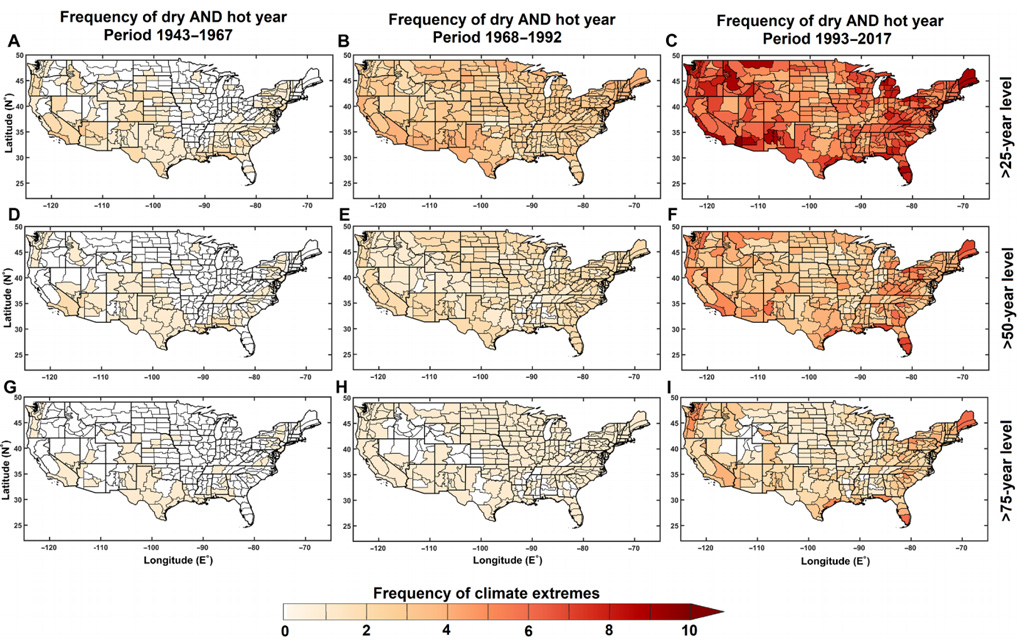 The orange and red shading indicates a general increase in the frequency of dry-hot extremes in the more recent time periods for all three severity levels.

Specifically, the results show that dry-hot extremes with a 25-year return period have increased in frequency across the western US, Florida, the eastern portion of the northeast and some parts of Michigan, Minnesota, Mississippi, and Alabama.

Increases in the most severe dry-hot extremes (with a 75-year return period) have occurred in the coastal Pacific Northwest, inland Southern California, Florida, Maine and several parts of Texas, the research says.

The researchers also studied the likely drivers of the observed increases.

They found that human-caused climate change – rather than natural swings in the climate –  was the main driver of the increase in extremes, says Sadegh:

The analysis finds that, in the 1930s, a lack of rainfall was the most likely trigger for dry-hot extremes, such as the “Dust Bowl” droughts of midwest America.

However, over the past five decades, the most likely trigger has changed to be extreme heat, explains Sadegh:

“This is important because even in a slightly-below-normal precipitation year, we might observe moderate to severe drought [because of extreme heat].”

“Self-intensification means droughts and heatwaves intensify one another; dryness leads to more heat – and more heat causes more dryness. Self-propagation refers to movement of aridity and heat from one region to others.”

Droughts and heatwaves are able to intensify one another due to land-atmosphere feedbacks, he explains.

For example, drought causes soils to become dry. When soils are dry, they absorb more incoming heat because there is less of a cooling effect from moisture being evaporated. This means the air above the soil heats up faster. When air becomes hot, more water evaporates – causing soils to become even drier, explains Sadegh:

“This cycle continues until a large-scale weather pattern breaks it.”

The increase in dry-hot extremes is linked to another worrying climate feedback loop.

The conditions create the ideal conditions for large fires, including those seen recently in the US west coast, says Sadegh:

“Dry-hot events are the recipe of large fires – add wind and a source of ignition – and they will secure megafires.”

Carbon emissions from this year’s US fires are three times above average, according to the World Resources Institute.

More emissions are likely to result in more dry-hot extremes, which will, in turn, further raise the risk of wildfires, says Sadegh:

“The future will bring us more of these disasters, if the current warming trends continue.”

The findings “imply a higher probability of fire weather” for the western US, agrees Prof Sonia Seneviratne, a researcher of land-climate dynamics from ETH Zurich. She tells Carbon Brief:

“This is a very timely study as the investigation of compound events is a strongly emerging topic in climate research.”

The post US sees ‘alarming’ increase in combined heatwaves and droughts appeared first on Carbon Brief.

Proposed Bill will “fail to regulate” the majority of water abstractions