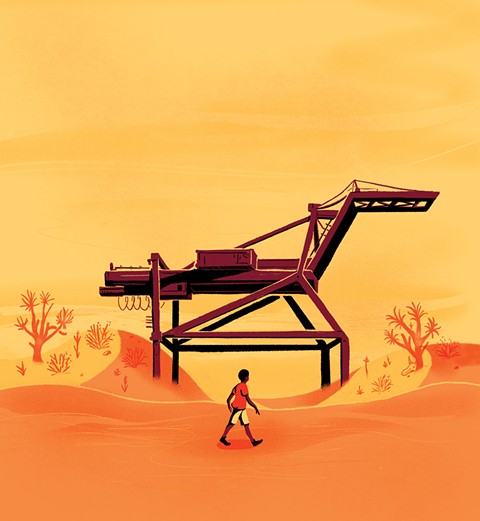 The group of UC Berkeley researchers woke up early each morning around 2 o’clock and piled into a truck to make their rounds. Stationed at a ranch in San Luis Obispo County, they visited dozens of oak and pine trees each day and took branch samples of each.

While one crew member inserted samples into a pressure chamber to test for signs of drought-related water stress, two others scurried up the hill with clippers and headlamps and took samples of outlying trees. Watching for rattlesnakes, they sprinted back to the vehicle and ran the same water tests on each sample. The researchers had to complete the tests within minutes of cutting the samples to produce a valid result.

Back at camp, they napped by day, resampled each tree after lunch, and got to bed around ten.

“Then we’d get up again at 2,” said Andrew Weitz, a UC Berkeley grad student who helped lead the project.

After nearly two years of studying 109 trees at the height of California’s historic drought, Weitz, his professor David Ackerly, and the rest of their team saw something remarkable: Some of the oldest oaks in California were dying.

At study sites near Kenwood, Sonoma County, Weitz said, valley and blue oaks wilted and turned brown. At the more southerly site in San Luis Obispo, hillsides of trees — most of them old enough to have stood over foraging grizzly bears in the 18th and 19th centuries and lived through many long dry spells — simply perished.

“The death of these old oak trees serves as an early warning of the effects of a changing climate,” said Ackerly, an ecologist in Cal’s Department of Integrative Biology.

Weitz added that warming and extreme droughts pose “very serious threats to the future of oak woodlands” in California.

The abrupt deaths of ancient oaks during the recent five-year drought is just one of many pieces of evidence that climatic baselines are shifting as the planet warms. All told, at least 100 million trees — mostly sugar pines — died in California during the drought. In the Sierra Nevada, scientists also saw a sudden, if small, spike in deaths of giant sequoias — ancient trees that had lived through their share of megadroughts.

In the same mountain range, scientists have discovered that bristlecone pines, the world’s oldest individual organisms, are being overwhelmed by faster growing species advancing upslope as temperatures rise in the high country. Giant sequoias have also shown signs of drought-induced stress, and researchers with UC Merced and the U.S. National Park Service recently published a study warning that the ancient trees could be imperiled by warming. Plus, the winter snowpack is melting more rapidly each year, a major threat to the state’s native salmon and trout.

For many scientists, the recent drought offered a valuable preview of what Californians can expect as greenhouse gases continue to accumulate and trap the sun’s energy in the atmosphere.

“In Mediterranean climates throughout the world, it’s going to get hotter and drier,” said Anthony Ambrose, a postdoctoral researcher at UC Berkeley who has been studying coastal redwoods and giant sequoias and their responses to extreme weather. Such extreme climate events will drive “range shifts and local extinctions,” Ambrose said.

Already in Southern California, higher-elevation conifer forests are being slowly replaced by oak woodlands and savannah. In the San Francisco Bay Area, climatic changes seem to be affecting distribution of vegetation and native birds, according to Josiah Clark, an ecologist and native bird expert in San Francisco. Clark, who conducts annual bird surveys throughout the Bay Area, said birds that have adapted to drier climates are becoming more prevalent in San Francisco, while ones that are dependent on more moisture are increasingly flying elsewhere.

In addition, intense wildfires like the recent blazes that tore through the North Bay could hasten the changing environment, scientists say. Forests that burned down might not come back as before, instead taken over by species that like hotter conditions and longer droughts.

Humans will hardly be immune to the devastating impacts of global warming. Searing heat waves that kill thousands have become recurring events and are expected to be routine by the end of the century. And hurricanes are getting a boost from warmer ocean water, which adds devastating energy to the storms.

Seas are rising, and so is the human death toll. Scientists say global warming fueled the drought that helped spark the conflict in Syria, where hundreds of thousands have been killed over six years.

Park Williams, a bioclimatologist at Columbia University’s Lamont-Doherty Earth Observatory, said the evidence of climate change is now so prominent that even laypeople can see and feel it happening, as hurricanes, droughts, and wildfires worsen.

Ackerly warns of an increasingly unstable future. “The new normal is rapid change,” he said.

The year 2016 was bad for trees around the world. That year, the world’s forests lost 73 million acres of canopy to drought, fires, and deforestation, according to a recent assessment by the organization Global Forest Watch. That’s 50 percent more than the canopy cover lost in 2015. Portugal was particularly hard hit last year, losing 4 percent of its tree cover. Much of it will grow back, certainly. Much probably won’t, however.