Home News What is causing the increase in atmospheric CO2?

This post is an updated intermediate rebuttal to the myth “CO2 increase is natural, not human-caused“. It was written by Erika Harrington as part of the George Mason University class Understanding and Responding to Climate Misinformation, combining climate science and communication best practices to debunk common climate myths.

Atmospheric CO2 has increased by more than 100 parts per million since the Industrial Revolution in the mid-1700s, when humans began burning fossil fuels like coal and oil. Human activity has increased CO2 to levels not seen in the past 800,000 years. 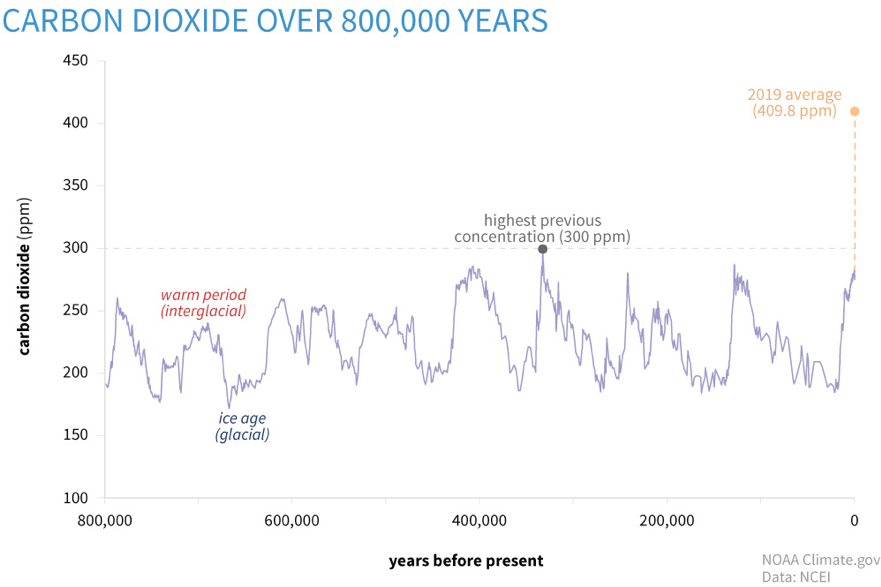 Figure 1: Atmospheric CO2 concentrations in parts per million (PPM). Levels have peaked throughout time but we’ve seen a steep increase of 100 PPM since the industrial revolution, Climate.Gov

To understand atmospheric CO2 levels, we must look to the carbon cycle. The carbon cycle allows us to track the CO2 being emitted into the atmosphere and absorbed by the planet. 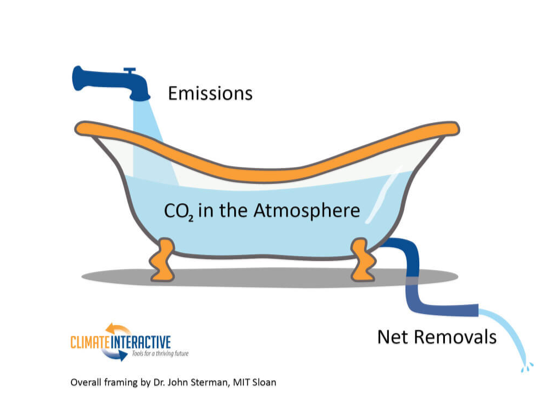 A common analogy for this is a sink or bathtub. When you turn on a faucet, water flows into the basin and out through a drain. As the amount of water in the basin increases, more pressure is put on the drain, and therefore more water releases from the drain. The carbon cycle works in a similar way. As more CO2 (water from a faucet) is released into the atmosphere (the basin), more CO2 is naturally absorbed by the planet (the drain). In addition to the atmosphere, the planet has three main carbon reservoirs which include the solid earth, the land surface, and the ocean. Natural glacial and interglacial cycles over the last 800,000 years have worked to move CO2 between the atmosphere and these reservoirs, specifically the ocean reservoir.

Figure 1 shows that CO2 levels were lower during the glacial periods (180 PPM) and higher during warmer interglacial periods (280 PPM). Since the Industrial Revolution, there is a visible difference in CO2 level measurements in the “basin” (aka the atmosphere). This could be caused by either an increase in emissions from the “faucet” or decreased net removals in the “drain.” Below we will take an in-depth look at the scientific evidence that net removals are actually increasing, and therefore the recent atmospheric CO2 increase must be due to an increase in emissions.

Take a close look at the myth and you’ll see that the argument being made implies that humans aren’t the cause of recent CO2 increases because the increase is natural. Instead, the myth suggests that global warming is the cause of the CO2 increase and further, that global warming is occurring naturally. This commits the fallacy of “slothful induction” or ignoring relevant information to come to a conclusion. In this case, the myth ignores multiple sources of observational evidence that burning fossil fuels has caused increased atmospheric CO2 levels.

We know nature is not the source of growing CO2 levels in the atmosphere because land and ocean CO2 storage has increased. One way that we know the planet’s “drain” is absorbing increased levels of CO2, is by looking at our oceans.

When CO2 is absorbed into a solution, it binds with a water molecule to form a molecule of carbonic acid (H2CO3)

Carbonic acid [H2CO3] has a rather strong acidifying effect in that 95% of it turns into bicarbonate [HCO3–].  This loss of an H+ ion causes the ocean pH to decrease.

In short, CO2 could be coming from the ocean, but falling pH shows that it’s not. Instead, our oceans are absorbing more carbon than they are releasing.

Isotopic evidence points to fossil fuels as the source of CO2 emissions. Carbon is composed of three different isotopes: carbon-12, 13, and 14.  Carbon-12 is by far the most common, while carbon-13 is about 1% of the total, and carbon-14 accounts for only about 1 in 1 trillion carbon atoms in the atmosphere.

Reconstructions of atmospheric carbon isotope ratios from various proxies, such as tree rings and ice cores, have determined that the carbon-13 to 12 ratios in the atmosphere are the lowest today than they’ve been in the last 10,000 years. Furthermore, the carbon-13 to 12 ratios begin to decline dramatically just as the CO2 starts to increase — around 1850 AD. This is exactly what we expect if the increased CO2 is in fact due to fossil fuel burning beginning in the Industrial Revolution. These isotopic observations confirm that the increase in atmospheric CO2 comes from plant-based carbon, not from the oceans or volcanoes. 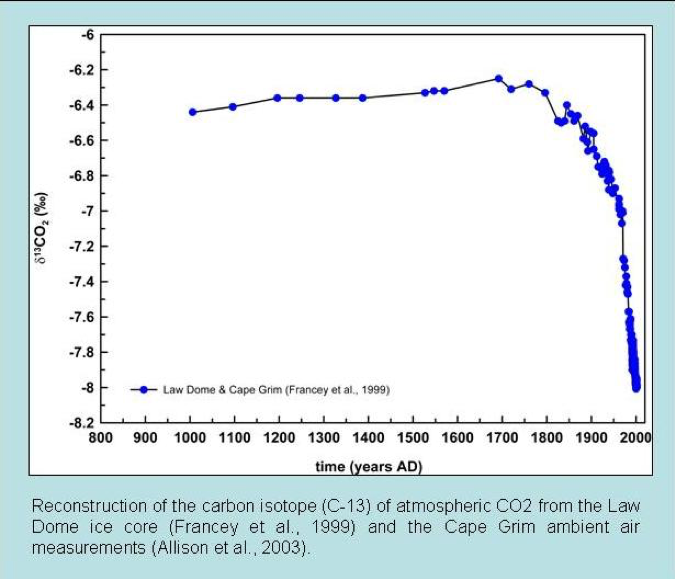 Some argue that the carbon-13 ratio isn’t unique to fossil fuels.  However, because the carbon-14 ratio has also decreased significantly (Figure 4), we know it’s from old (fossil fuel) sources, not modern sources. The carbon-14 ratio decreases as more fossil fuel emissions dilute the atmospheric CO2 signature. This is not new science either, it’s something we’ve known for over half a century (Revelle and Suess 1957), and there have been many studies confirming these results.  For example, Levin & Hesshaimer (2000): 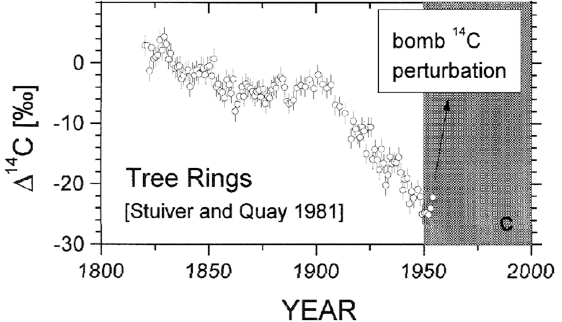 We also know that burning fossil fuels has led to the recent increases in CO2 levels because of observed decreases in atmospheric oxygen levels. Burning carbon requires oxygen, so when we burn an atom of carbon, the required oxygen becomes part of the CO2 molecule.  If the CO2 increase is caused by burning carbon (fossil fuels), we would expect atmospheric O2 levels to decrease at the same rate.  And that’s indeed what we observe (Figure 5). O2 concentration is changing exactly as we would expect from a fossil-fuel driven CO2 increase. 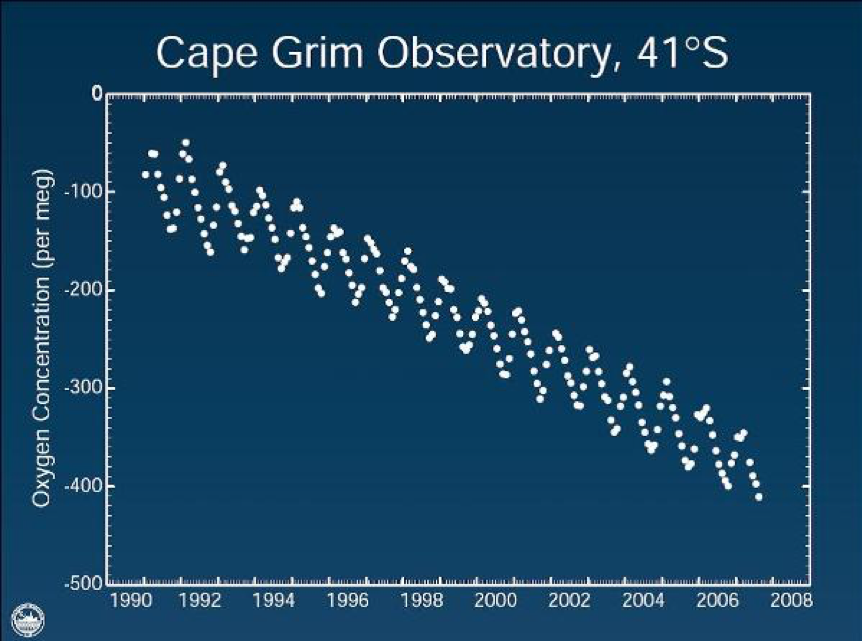 So let’s review. One climate myth argues that atmospheric CO2 increases are the result of natural global temperature changes. However, as described above, scientists have found multiple lines of evidence that show recent CO2 level increases are the result of burning fossil fuels. Between ocean acidification, isotopic signatures of the atmosphere, and trends in O2 levels, the evidence is abundantly clear that burning fossil fuels have resulted in an increase of atmospheric CO2, not seen in 800,000 years. The correct causation is an important distinction to make. Rather than global warming causing the increase in atmospheric CO2, our use of fossil fuels are actually the source of the increase. Moreover, we know that it is this human-caused increase in atmospheric CO2 that is warming our planet.