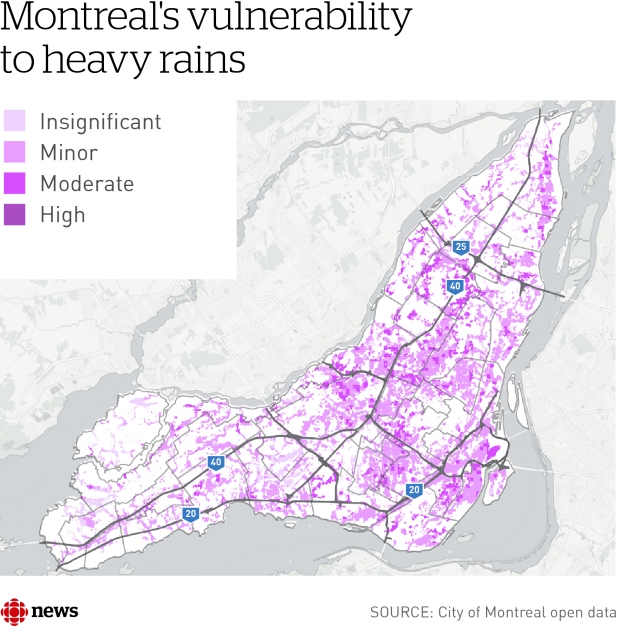 A series of freak weather events this year — from a 30-centimetre March snowstorm, to spring flooding, to a record-breaking fall heat wave — tested the ability of Montreal’s infrastructure to handle the effects of climate change.

The results were mixed.

The power grid withstood the heat wave, but a late September thunderstorm left tens of thousands in the dark.

​This uneven performance underscored, for many observers, the pressing need to adapt the cityscape to ever-increasing environmental volatility.

A recent study conducted by Ouranos, a Montreal-based consortium of environmental experts, estimated that climate change could raise average temperatures in southern Quebec by seven degrees over the next century.

As early as 2050, the study predicts, Montrealers can expect an additional month of summer temperatures. By 2070, there could as few as 45 days of snow.

Though fewer, snowfalls are expected to be more intense. Spring flooding, likewise, will occur progressively earlier in the year.

Much of Montreal’s infrastructure was built without taking these impending changes into account, exposing Montrealers to a number of risks if it fails.

Earlier this year, the city produced a report, based on the Ouranos data, that identifies parts of the city that are vulnerable to particular types of extreme weather events.

With such information now available, the next administration will be under pressure to be more decisive in redesigning the city to make it more resilient to climate change.

“The reflection is there, but now we have to take action, and to take action there needs to be political will,” said Isabelle Thomas, a specialist in urban vulnerability to climate change at the Université de Montréal.

“We’re in a municipal election campaign, so we’ll see what happens.”

Each party has its share of innovative ideas about how to boost the city’s resilience to extreme weather.

Scott McKay, the noted environmentalist running for city council with Équipe Coderre in Rosemont–La-Petite-Patrie, wants to develop a new approach to treating rainwater.

As the city is now built, most sewers, drains and ditches are designed to evacuate standing water as quickly as possible.

But over the course of the next half-century, heavy rain is set to become more frequent, taxing sewer systems and making flash flooding more likely.

So McKay wants to see the city’s water infrastructure designed with multi-functionality in mind. Its purpose shouldn’t simply be to funnel water away from buildings and streets, but to find ways to repurpose it.

Rain gardens, he notes, can accomplish this task. They are an increasingly popular urban design solution in which runoff is channeled towards deep-root vegetation, where it is either absorbed by plants or stored.

“When a heat wave comes, the water can evaporate and eventually cool the area,”  McKay said. “Instead of having a heat island where there was a parking lot, you transform it to a cool, vegetated area.” 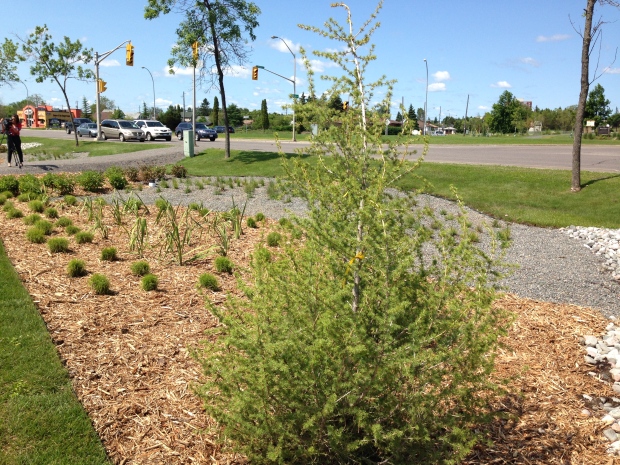 A rain garden in Thunder Bay. A few have been built in Montreal, but Scott McKay wants to see more. (Matt Prokopchuk/CBC)

But, for Ouellet, designing a resilient city also means doing a better job of incorporating existing data on vulnerability into planning decisions.

“We’re not really prepared for climate change,” he said. “The City of Montreal mapped our vulnerabilities and risks, but it doesn’t really take that seriously in its investments and infrastructures.”

As a councillor for Villeray–Saint-Michel–Parc-Extension, he says, he recently voted against two development projects in his borough that included underground parking garages.

The projects met existing regulations, but they failed to take into account the area’s vulnerability to heavy rains — identified in the city’s climate change adaptation plan, Ouellet said.

“We have better knowledge about the risks, but we don’t factor them into our planning regulations,” he said.

Building a resilient city is, at best, a tangential issue for most in the current municipal campaign.

But in Pierrefonds-Roxboro, where residents and business owners are still recovering from spring flooding, climate change resilience is arguably the central issue in the three-way race for mayor.

Incumbent mayor Jim Beis, a member of Équipe Coderre, is under pressure from his Projet Montréal and Vrai changement pour Montréal opponents over past planning decisions in the borough.

​Out-of-date flood maps and lax borough regulations allowed a flurry of new construction to take place in areas at risk of flooding, despite a 2010 provincial decree against such developments.

Justine McIntyre, the Vrai changement leader who is also running for borough mayor, wants to halt construction in flood plains.

She’s also opposed to a real-estate development that would see 5,000 units built in the l’Anse-à-l’Orme nature park, parts of which are considered flood-prone. Beis hasn’t ruled out supporting the project. 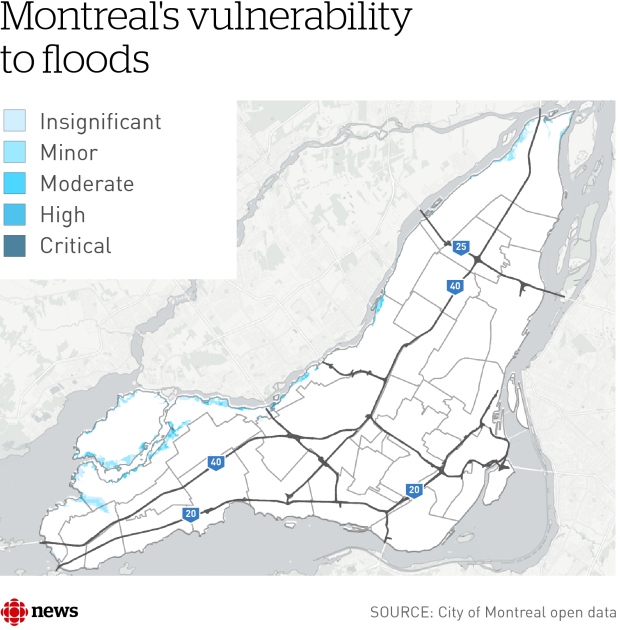 McIntyre sees protecting the wetlands as an opportunity to help the borough prepare for a future of higher water levels and more frequent flooding.

“We went through the floods in the spring,” she said. “We understand the importance of preserving these green spaces as kind of a buffer to create resilience in this era of climate change.”

Building a city that is truly resilient may require more profound changes than elected politicians are able to commit to during a campaign season.

Both of the mayoral front-runners, for instance, back initiatives to encourage Montrealers to adopt electric vehicles.

That, however, may only amount to a temporary solution, one that fails to address our reliance on costly and damaging transportation networks. 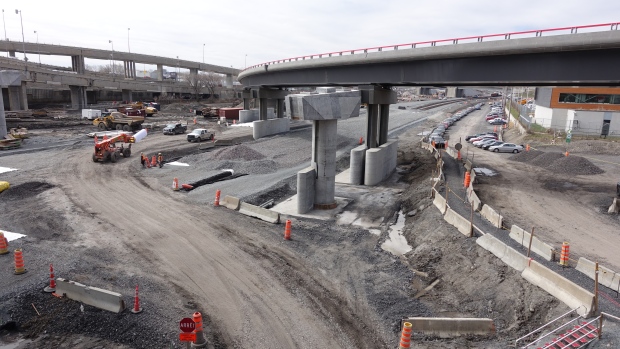 Individualized transport — electric or otherwise — requires highways and parking lots and driveways, all of which come at the expense of ecosystems that are needed to offset the effects of climate change.

“Most cars are parked 23 hours of the day, but they have to be able to access every part of the city, otherwise the system doesn’t work,” said Gauthier.

Moving away from that model, though, would require serious sacrifices on the part of Montrealers, such as tolls or higher taxation rates to halt urban sprawl — policies that no Montreal politicians seem yet willing to propose.