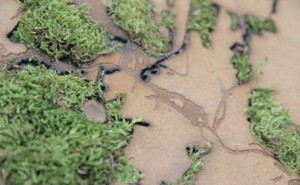 Twenty years ago, Berlin’s network of sidewalk paths marked it out as one of Europe’s best places to ride a bike. But as the German capital knows well, it’s not easy to keep a reputation as a bike-friendly city. Nowadays, Berlin looks decidedly behind the times compared to Amsterdam and Copenhagen, with its bike-lane network characterized by limited space and poor separation from cars and pedestrians. Thanks to plans being hammered out by Berlin’s lawmakers right now, that could all be about to change.

At the heart of the plan lie 13 new bike superhighways, approved at the end of February. Narrowed down from an original list of 30, the first two of these new routes should begin construction by the end of 2017. As the “highway” title suggests, these won’t just be ordinary roadside paths. They will be completely segregated, unbroken longer-distance routes that will allow Berliners to get in and out of the city center much faster and more safely—without ever having to mix with cars.

To be fair, the city is still far from a terrible place to get around on two wheels. A roomy street plan means many major roads have sidewalks wide enough to make room for a single bike lane—one on each side of the street—without overly crowding pedestrians. Cyclists are still pushed into unsegregated traffic, at times. As well as being less safe, this often means cycling over backside-numbing cobblestones that can leave you more than a little saddle-sore. This might have seemed exemplary at the turn of the Millennium, but Berlin knows it can do better.

An example of one of Berlin’s current sidewalk cycle lanes. (Eric Sehr/Flickr)

The new bike highways should be laid out with a seriousness and roominess normally reserved for motor vehicles. To qualify, the new links will have to be at least 5 kilometers long and offer no more than 30 seconds of stopping time at intersections and traffic lights per kilometer. To allow safe overtaking, the highways’ lanes have to be at least 4 meters (13 feet) wide, shrinking to 3 meters when the lanes are completely separated into one-way tracks.

These rules should make them safer and faster to use, but they pose a question for Berlin that every city trying to improve conditions for cyclists must face. Where will they go? It’s easy for passionate bike advocates to say that cars should be pushed out to make space for bicycles. The sheer contentiousness of that process can serve to cause division and resentment that is in itself an impediment to change, in the end slowing down improvements.

Berlin has somewhat easier answers to this question than most cities. The city’s history of bombardment, division and reunification has opened up a few seams of space threaded in and out of the city’s heart that are ripe for development—spaces that are rare in other places. For a start, Berlin has several disused railway tracks. Gradually abandoned in the postwar period when West Berlin no longer needed heavy rail connections to Potsdam or the (now Polish) city of Szczecin, the rail links were also no use to East Berlin because their termini lay outside the GDR’s territory. These former lines offer avenues of green from the outskirts toward the city center, making them ripe for a reuse that shouldn’t destroy their leafy character.

The unnecessarily huge space of the city’s central Strasse des 17. Juni is another slated location for a cycle superhighway. Plowed through the Tiergarten park, this avenue was widened by Nazi planners as a preliminary step to (probably unrealizable) plans to transform Berlin into a monumental fascist showcase, leaving it conveniently roomy. More recently, a post-reunification autobahn was carved into the city from the southeast, following the line of the Berlin Wall. This highway already possesses an unused track that could be separated off for bikes with a crash barrier.  And finally, there is the space underneath the city’s elevated subway, dubbed the “municipal umbrella” when first built. First covered by CityLab last year, this route could, if properly adapted, provide a generous dual carriageway for bikes along one of the city’s busier strips.

None of these routes’ transformations come without hitches, however. The elevated subway lines may have space underneath them that is either empty or used for parking, but their path is blocked at every station by staircases leading passengers up to the raised platforms. As one commenter noted on our previous coverage, this raises the specter of bikes crashing into subway users as they exit the stations. It might also present a challenge to the ruling on no more than 30 seconds of holdups per kilometer. Meanwhile, there are citizen groups that want the unused railway lines to be returned to their original purpose by offering train services.

Berlin still has the wind of public support behind its bike plans. A popular campaign to get a city-wide referendum on more bike funding gained over 100,000 signatures last year, enough to at least put a citywide vote on the agenda. The cycle highway concept enjoys cross-party support—partly because it largely leaves car space alone. This means that when it comes to newer, faster bike links for Berlin, it’s now a question of when and how many, rather than if.

Climate Change climatechange - September 15, 2022
0
To improve understanding of variation of Earth's rotation in the 4th--7th centuries CE, a research team analyzed Byzantine records from this period to identify...

Climate Change climatechange - February 18, 2021
0
As climate change takes hold across the Americas, some areas will get wetter, and others will get hotter and drier. A new study of...

Climate Change climatechange - July 12, 2021
0
Rapid snowmelt can be dangerous, and understanding its drivers is important for understanding the world under the influence of climate change.