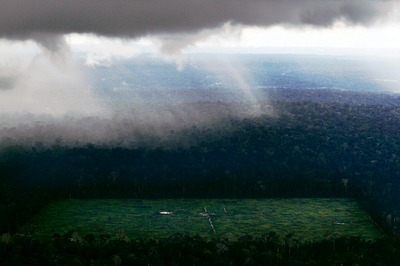 The average size of cleared areas in the Amazon (pictured) has increased over many regions since the 1980s. Deforestation modifies regional moisture cycling as it reduces the amount of water returned to the atmosphere by trees, but hydroclimatic impacts depend on both the spatial extent of deforested areas and how these surface changes affect atmospheric circulation1. Past observational and modelling studies have examined the effects of small-scale or large-scale deforestation, but the climatic effects of scale transitions have been little explored. Now, writing in Nature Climate Change, Jaya Khanna and colleagues report that deforestation expansion associated with a scale transition in the southern Amazon has increased dry season rainfall downwind of logged regions, but decreased rainfall in upwind areas2.

Typically, precipitation in the Amazon is recycled back to the atmosphere through transpiration, the process by which moisture moves through plants and is eventually released from leaves as water vapour. This constant transpiration-driven recycling of rainfall enables moisture to penetrate deep into the Amazon basin, a continental interior that would be much drier without this arboreal moisture pump3, 4.

The Amazon hydroclimate is also influenced by the roughness of the forested surface. Land dominated by trees of varying heights, as found in old-growth tropical forests, are up to two orders of magnitude rougher than surfaces dominated by grasses1. Such roughness encourages deep convection that tosses parcels of air high into the atmosphere, promoting cloud formation and potentially triggering precipitation.

Deforestation disrupts these eco-hydrological processes, the climatic effects of which are dependent on the spatial scale of disturbance. Small-scale deforestation patches (approximately 1 km in size), for example, are not large enough to significantly disturb the transpiration flux. However, land cover heterogeneities differentially heat the surface, initiating shallow thermal, or convective, circulations that increase local cloudiness and in some instances precipitation5. As the scale of deforestation exceeds 200 km, by contrast, conversion to pasture grasses or agricultural crops shuts off a large portion of the transpiration water pump. The corresponding reduction in precipitation recycling decreases downwind rainfall over large areas6.

Now, Khanna et al. have explored the controls on dry-season (June–September) precipitation in the Rondônia region of the southern Amazon, Brazil. It has seen a shift from small deforestation patches in the 1980s to larger intermediate-sized forest clearings in the 2000s (ref. 2). They hypothesized that this shift would modify forest–atmosphere interactions from being mostly thermally driven under small clearings, to being dynamically driven under large clearings associated with reductions in surface roughness. Indeed, multi-decadal satellite records and Earth system model simulations illustrate that expanded deforestation has shifted the patterns of regional cloud cover and rainfall; compared to the 1980s, locations upwind of logged areas now experience decreased cloud cover and precipitation, whereas downwind locations exhibit increased cloudiness and precipitation.

The observed hydroclimatic changes have important implications for land management. Dry season precipitation impacts crop and forest plants, with reductions leading to additional stress and vegetation mortality. Some Earth system models and regional studies indicate potential drying of the southern Amazon with a warming climate7. Other studies have shown an intensification of the hydrological cycle over the past few decades8 and a lengthening of the dry season in the southern Amazon9. Thus, the combined effects of local land-use-driven shifts in precipitation patterns, coupled with global climate changes in precipitation and temperature, will result in a higher incidence of extreme events, negatively impacting plant health and amplifying economic losses, affecting human well-being.

As Khanna et al. note2, additional work is needed to demonstrate how generalizable these results are for other regions within the Amazon, as well as the tropical forests of Africa and southeast Asia. It is also necessary to determine whether these mechanisms are constrained to the dry season. Given the nonlinear and complex interactions influencing precipitation, rigorous evaluations of the underlying model mechanisms are also needed against comprehensive sets of field data. The Large-Scale Biosphere Atmosphere Experiment in Amazonia continues in Brazil (http://lba2.inpa.gov.br) and may provide useful datasets to further develop these important model benchmarks. Improved collaborations between modelling and measurement scientists are needed to ensure that model results can be causally and empirically linked to the appropriate underlying mechanisms.

Land–atmosphere dynamics are notoriously challenging, and improved regional predictions will require further elucidation of how interacting processes, such as those highlighted by Khanna et al., result in shifting weather patterns that affect precipitation, carbon balance, and everyday lives.