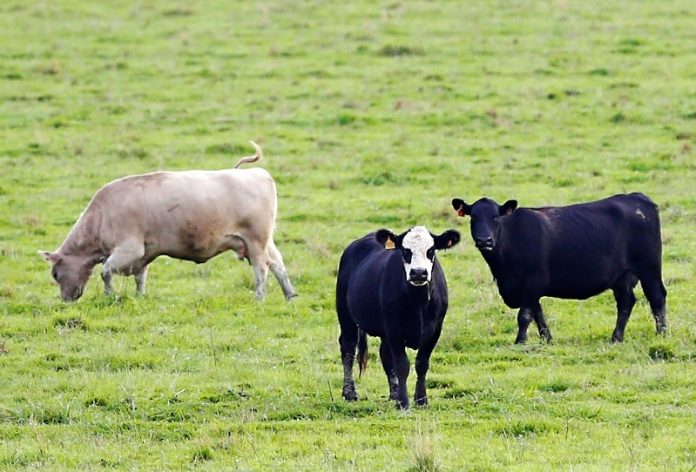 Soil’s ability to capture carbon and store water has led to an upsurge of interest in this often overlooked natural resource.

In California, a new program called the Healthy Soils Initiative is about to put unorthodox farming practices to the test. With modest grants of up to $50,000 administered by the California Department of Food and Agriculture (CDFA), a network of farmers and ranchers throughout the state will embark on a series of experiments in carbon farming.

The term refers to improving soil health by biological processes that limit the amount of synthetic chemicals applied to crops and adopting techniques aimed to reduce nutrient loss.

Kevin Muno is among the converts. He and his business partners at the Santa Ysabel Ranch run a cattle operation called the Land of Milk and Honey. Located about 40 miles northeast of downtown San Diego, it is the southernmost of the ranches testing the efficacy of carbon farming methods in California.

According to Muno, his goal is to restore the ecology of the landscape through a series of practices that he calls regenerative agriculture. The aim is to improve soil quality and to promote vigorous plant growth. By demonstrating the ecological services that carbon farming can provide, he and his partners believe they can prosper and conserve resources. “Humanity can benefit,” says Muno. “People in the city like clean air and water in their reservoirs. If we manage the landscape correctly, we can have those things.”

At the ranch, cattle move around on small areas of land meant to mimic the herding instincts of wild herbivores. Chomping on grass, urinating and defecating as they go, the cows consume, digest or trample every edible plant in the segment. The plant life is then allowed to recover as the cattle are moved on.

If things go as expected, the grassland will spring back more thickly than before. The soil will hold more water, and provide more organic matter essential to plant growth. Healthy soil, in turn, becomes a carbon sink thanks to the improved plant vigor.

Based on advice from the Carbon Cycle Institute (CCI), Muno is also using compost to improve the soil. A quarter-inch of it was applied to half an acre of the ranch. Over several years, technicians will monitor the site for carbon uptake and then compare the results of a carbon farming study done in Northern California.

The experiment is based on research conducted by scientists at the University of California, Berkeley, and the Marin Carbon Project, a nonprofit organization. Over three years, they determined that a single application of a half-inch of compost to grassland led to an additional ton of carbon stored per hectare.

While measuring the potential for carbon sequestration on grasslands was the primary focus of the study, there were multiple benefits. The findings showed spreading compost also boosted plant growth by 40-70 percent. In addition, each hectare of land absorbed up to 6,868 gallons of water in the topsoil, allowing the grassland to remain lush and vibrant for extended periods.

Muno would like to duplicate these results on his ranch. “We want to recharge the
water table by putting carbon into the soil to the point where we can make streams flow again,” he says. If he succeeds, the next step will be to scale up. San Diego County is home to more than 5,000 small farms and 208,564 acres of ranchland.

The statewide soil program is the first of its kind in the United States, and the goal is
to store carbon while treating the soil beneath farmers’ and ranchers’ feet as part of a living system. Advocates for adding compost to farmland and grassland believe dirt, much like humans, requires good food to remain healthy and productive. Good dirt, in turn, produces abundant plants with a healthy appetite for carbon.

“In a way, it’s like a vitamin or a probiotic boost, so the plants perform at a higher level,” said Pelayo Alvarez, a spokesperson for the CCI. Adding nutrients to the soil feeds micro-organisms beneficial to plant growth, which in turn enhances plants’ ability to absorb carbon through photosynthesis.

In short, the judicious use of compost could be an effective way to grow more grass, and serve to slow the pace of climate change.

To achieve those two objectives, California’s state legislature created a $7.5 million fund to establish a set of protocols providing clear direction to farmers and ranchers. These include low-till and no-till farming techniques, composting and planting fruit and nut trees, where it is appropriate.

Cattle graze in a field near Sacramento, Calif. Some ranchers have joined a state program to help build healthy soils in order to save water and sequester carbon. (AP/Rich Pedroncelli, File)

“We often look to places like the Brazilian rain forest as carbon sinks, but there’s an opportunity to sequester carbon in the soil of our farms and ranchlands,” said Jenny Lester Moffitt, who oversees the soil program for the CDFA.

According to Moffitt, getting carbon into the ground is yet one more way for California to meet its goal of reducing greenhouse gas emissions to 40 percent below 1990 levels by 2030. To reach this target, every sector of the economy will need to participate, with greater coordination between state agencies at the regional and local levels, she said.

One strategy is to remove green waste from landfills and convert organic matter to compost. Calculations provided by scientists working with the CCI estimate that spreading compost on San Diego’s 200,000-plus acres of grassland would sequester 3 million metric tons of greenhouse gas, enough to offset all carbon emissions produced by the incorporated sections of San Diego County in 2014.

Agriculture accounts for 8 percent of greenhouse gas emissions in California. And with approximately 50 percent of the state’s landmass covered in grassland, the challenges and the opportunities for reducing emissions on such a vast scale are considerable.

Aside from sheer size, California contains multiple biomes that defy easy categorization. So making overarching proscriptions for building healthy soil is difficult to determine, without first exercising due diligence. “We’ve whittled these carbon practices down to what we know should work,” Moffitt said. “To meet our state’s needs every practice has to have a quantifiable greenhouse gas reduction.”

Muno thinks the effort is worth it, and he is beginning to see the results.

He says the landscape seems greener and lusher than in previous years and he is grazing more cattle than in the past. In his view, carbon-rich soil leads to better grasslands and to healthy cows: “There are lots of benefits to grazing cattle in union with nature.”