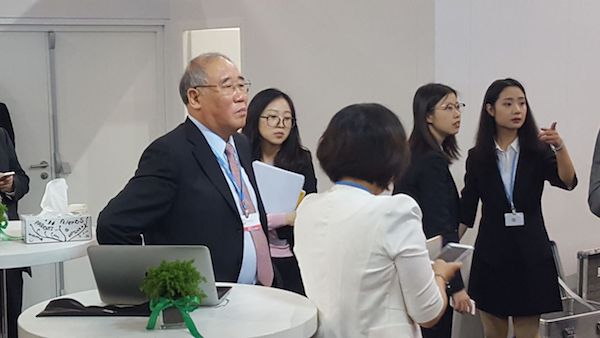 As UN climate talks drew towards a close on Friday night – barring some minor scuffling – China’s lead envoy Xie Zhenhua strode up and down the Bonn conference centre from meeting to meeting making his presence felt.

China’s top climate negotiator, once courted by the Obama administration, sits at the centre of a coalition of developing countries that won the day in Bonn.

At the first major climate conference since Donald Trump made clear his intention to withdraw the US from the Paris Agreement, an often divided group of 130 developing nations were “united as never before”, said Xie, and had successfully extracted concessions from developed countries on early climate actions ahead of 2020 after bitter negotiations.

“The results have largely met developing countries’ demands,” he said after a draft decision on the pre-2020 arrangements was agreed by parties earlier this week.

That fight was pushed primarily by a group of countries from the developing world that are fronted by Iran, but dominated by China. Other developing countries fell in behind them.

According to some observers, the group of four major emerging economies known as Basic – Brazil, South Africa, India and China – also worked in abnormal concert throughout the talks, piling negotiating texts full of language that split the world into rich and poor.

This issue, which eases responsibility for middle income countries, was anathema to the US before Trump and remained a “top priority” for the Trump delegation in Bonn. It’s reemergence sends a strong signal that poor countries are going to make next year’s talks difficult for the US and their rich world allies.

Gebru Jember Endalew, the chair of the least developed countries group, who are not traditionally sympathetic to China, agreed that the conference of parties (Cop) had been a coup for the world’s poorer nations.

“This has been the best Cop – not a traditional cop. It is a very important Cop. I believe that all the required issues have been [going] in the right direction,” he said.

“Trump has left a political vacuum,” said David Waskow, the director of climate change at the World Resources Institute. “But other countries made very clear they are willing to fill it.”

Xie denied that a low-profile performance of the US delegations would give developing countries an easier ride. Negotiators inside the rooms pointed to a “less visible” US delegation. But the Obama-era diplomats remained “engaged” and made “judicious” interventions along the same lines they have taken for years.

A senior developing country negotiator said: “They are less visible than they used to be, but their priorities are clear. There’s a strong sense of continuity.”

This continuity of personnel and priorities is part of what insulates the climate regime from outside shocks. Countries work in blocks, meaning that national politics is diluted. The diplomats who conduct this work are mostly familiar faces, even friends. This community effect shouldn’t be underestimated. They have a lot of skin in this game and care deeply for each other and the process.

But the same insulation also detaches these talks from what happens outside.

This conference took place across two campuses at opposite ends of Bonn’s huge Rheinaue park. In the UN climate change headquarters negotiators laboured over procedural decisions – many describing a “low energy” atmosphere. Even on Friday night, as talks dragged into the late hours and skirmishes broke out over climate finance and an emissions stocktake, the stakes were low.

Of the two major world leaders to turn up – Emmanuel Macron and Angela Merkel – only the French leader was able to inject a sense of intensity. Merkel was hamstrung by the ongoing negotiations for the German coalition government, in which the Greens are pushing her hard on her own missed carbon targets and heavy coal use.

At the other end of the Rheinaue, in the ‘Bonn Zone’, a cavalcade of ‘climate solutions’ were on show for two weeks. All the cities, regions, companies and indigenous peoples who say they have the answers were given a space. Walking the halls you could meet Pacific islanders, mayors from Cameroon, advocates for hydrogen fuels, even Arnold Schwarzenegger – “if someone tells you to wait [to act on climate], tell them eff yoooouuu”.

In the spirit of openness, the US president was able to demonstrate his backing for US energy companies and their workers. The US event, which included a Peabody coal executive, was interrupted by a ten minute singing protest that had been signed off by the White House. It was a moment of staged drama that gave Trump a political win.

It wasn’t pretty, but it wasn’t low energy.

The difference between the two zones was symbolic, but it also represents the reaction Paris unleashed outside the negotiating halls. The world is going to spend $7.3 trillion on clean energy in the next few decades, the fight over who gets it is heating up.

The three stories that defined the conference happened outside the negotiating rooms ; the UK and Canada launched a global call to end coal, signing up 18 countries; the Trump administration’s successful attempt to bring their energy industry into the climate conversation; and the intervention of the US cities and states who camped themselves outside the main entrance of the meeting.

Meanwhile, negotiators are still stuck on working out exactly how the Paris Agreement will work, a task far more technically complex than the deal itself.

“In here, we are becoming detached from the real world,” said one negotiator in the plenary hall.

This feeling was exacerbated by the place this conference occupied in the multi-year process of brokering a global climate deal. The Bonn talks were always billed as a “technical meeting”. One at which the rules of the Paris deal were drafted, but not decided.

“There have to be boring meetings,” said another negotiator. “We cannot save the world every year.”

Sapped of political impetus, the diplomats “paced themselves”, said Tosi Mpanu Mpanu, the lead negotiator for the Democratic Republic of the Congo, adding he was “soul searching” as the talks came to an end.

“Nobody was able to go further [than predicted],” he said. “It was a self-fulfilling prophecy. Had we been more hopeful, maybe things would have gone differently.”

Ultimately, after a year of Trump hysteria, the show ground on. But the focus was elsewhere. The signs are that when these talks return in Poland next November, an emboldened developing world will drive home their newfound strength.