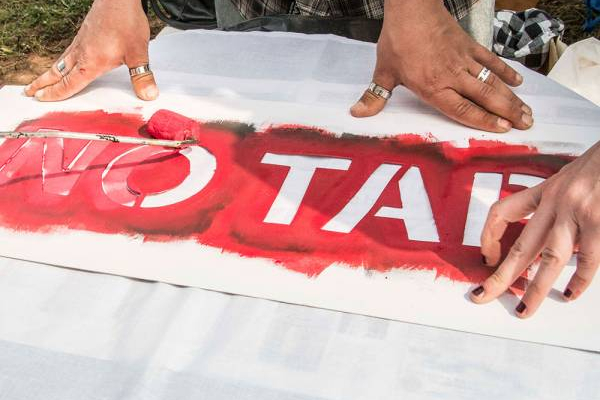 If someone announced plans to build a vast new cathedral in some European city, most people would look on with skepticism: church attendance has plummeted, especially among younger people; current churches are already bare. I say this with no pleasure, as a church-goer myself, but building great cathedrals is yesterday’s project.

How much more skeptical we should be, then, of plans to spend billions in public funds on building a vast new pipeline across the Adriatic and into the heart of southern Europe. On the 14th November in Luxembourg – as representatives from governments, cities, and civil society gather at the international climate negotiations to help tackle global warming – directors of the European Investment Bank (EIB) will meet and potentially, decide to sink €2 billion of taxpayers money into the Trans-Adriatic Pipeline (TAP). If we let them.

At this late date, as the world realizes it must immediately wean itself from fossil fuels, this pipeline is the equivalent of proposing a huge new church—except that an empty church would do no harm. The Trans-Adriatic Pipeline, on the other hand, is a global warming machine, whose clear effect will be to worsen the greatest problem the planet faces.

Think about it. Europeans, rightly, are scoffing at President Trump for his climate denial. And yet they’re at work building one of the biggest pipelines on earth—the sums of money invested here can only be justified if the TAP runs for decades. In essence, the EU and the national governments involved are saying “in 2070 we still expect Europe to be running on fossil fuel.”

They’re saying that at precisely the moment that it’s becoming clear how dire climate change really is. We’ve just finished the three hottest years ever recorded on our planet, and Europe has seen the effects: massive, deadly wildfire is now a regular occurrence, caused by the same droughts that turn some of the world’s most fertile valleys into desiccated temporary deserts. Then, when the weather breaks, it’s with a vengeance: witness the September storms that ravaged much of Italy. Rome went from water rationing to a flood emergency in hours: “climate change in action,” said the mayor.

Meanwhile, TAP comes just as the price of renewable energy is plummeting. Whatever spreadsheet justified the pipeline a few years ago is now seriously out of date: with each passing quarter sun and wind power gets cheaper. Fifty years out? Europe will still be paying for a pipeline that will serve mainly as a museum of archaic technology. This was precisely the point of the Paris climate conference: we had to stop building new fossil fuel infrastructure, and wean ourselves off the oil and gas wells we’d already drilled.

As Johan Rockstrom, the great European climate scientist has explained, “A roadmap to meet the Paris Agreement of staying “well below 2°C” will require halving global emissions every decade. Ramping up investment in fossil fuel infrastructure such as the Trans Adriatic Pipeline is inconsistent” with the accord. Indeed, it’s inconsistent with common sense: when you’re in a hole, stop digging. Especially digging new pipelines.

Resistance to the pipeline is strong and building: at San Foca in Italy, the local community are furious at the the undemocratic nature of a project they say is being foisted on them by central government despite 94 out of 97 mayors standing in opposition. Mothers, farmers, children and the local mayor managed to hold off police and bulldozers for several weeks before olive groves in the path of the pipeline were destroyed. But builders are moving with great speed because they know this is their last chance: a few more seasons of withering temperatures, a few more quarters of falling solar prices, and we will never build such projects again.

On his first day in office, President Trump approved two new pipelines that activists had been fighting for years. That was a breathtakingly bad decision (and farmers, ranchers, indigenous people and environmentalists continue to battle those plans). But Trump doesn’t believe in climate change: he thinks it’s a Chinese hoax, and he pulled America out of the Paris accords. America is suffering from global warming (look at our hurricane-plagued coasts this season) and it is surrendering its economic role as a clean-power innovator—the level of stupidity is overwhelming. But Trump’s too dim to be a hypocrite.

The same can’t be said for European leaders, all of whom are well aware of what’s at stake, but none of whom seem willing to break the zombie momentum of plans laid in another era.

An empty cathedral is a beautiful reminder of an earlier age, a little sad to some but no danger to anyone. A pipeline built this late in the climate game is not just a waste of money: it’s a horizontal monument to human folly, an ugly and ongoing danger.