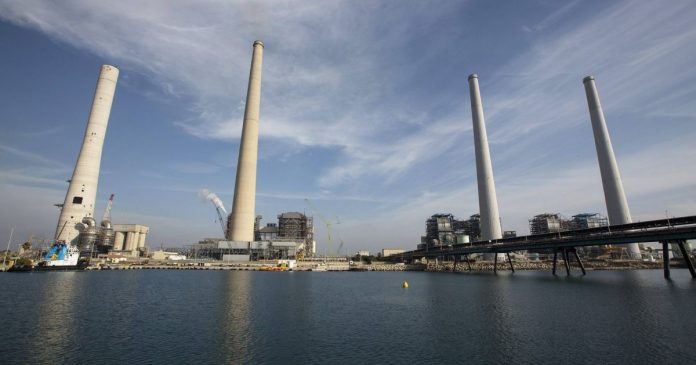 There has been a significant drop in pollution by industrial factories and waste treatment plants, according to data released by the Environmental Protection Ministry on Sunday.

The ministry’s annual report, the Pollutant Release and Transfer Register, receives its data from factories legally obligated to report their pollutant levels. The latest one covers 2016, indicating reductions over the last four years of 17 to 48 percent, depending on the pollutant. The two main causes of the reduction are the adoption of permits limiting each factory’s emissions and the switch to natural gas.

Despite the progress, per capita emissions of nitrogen oxides and sulfur oxides in Israel remains three times as high compared as those of EU countries. Exposure to these pollutants increases illnesses and mortality, mainly by affecting the lungs, blood vessels and heart. The main source of air pollutants is the coal-fired power stations in Hadera and Ashkelon, in which some units still operate without pollutant-reducing facilities.

There was a five percent rise over 2015 in non-methane volatile pollutants, partly because of exceptionally excessive emissions from the Negev’s Rotem Amfert factory in the course of upgrading its facility to reduce emissions. The ministry will hold a hearing on the incident.

Thank you for signing up.

This email address has already registered for this newsletter.

Carcinogenic emissions fell 8 percent in 2016 and 43 percent in four years, thanks to increases in the use of natural gas to generate electricity and the implementation of standards the ministry set to reduce factory emissions. Noble Energy complied with ministry demands for its Tamar offshore natural gas rig to conduct new measurements of its release of volatile organic substances, and found that the amount was 30 times more than previously reported. The main source of emissions is the water disposal process from the gas reserve, but the pollutants do not reach land.

Noble is to set up a handling rig in the Leviathan reserve, which is 10 kilometers off the Carmel beach. Residents, fearing contamination, are waging a campaign to prevent it from opening. The ministry says it does not expect contamination because the water disposal process will use methods that prevent the escape of poisonous fumes.

The ministry stated emissions of materials suspected of being or known to be carcinogenic dropped 54 percent in the Haifa Bay area in 2016.

The flow of pollutants into the Mediterranean Sea declined 32 percent in 2016, mainly because the Gush Dan waste treatment plant stopped pumping waste into the sea. The waste is now treated on land and converted into fertilizer.

There was also an improvement of quality at sewage treatment plants, which saw a 16 percent drop in the quantity of salts in effluents from 2013 to 2016. The change resulted from an increase in the use of treated water that is less saline to supply up to 50 percent of consumers’ fresh water. Consequently, the damage to aquifers was reduced.

The register also reported 65 factories that released pollutants as a result of breakdowns. The worst case was the 5,100 tons of various materials released in the oil refineries fire of December 25.

The register also noted a 2 percent increase in urban recycling. More significantly the treatment of construction waste jumped 140 percent, thanks to the opening of new transfer stations and increased supervision.

Citizens for the Environment commented: “The data show that Israel is still ranked low environmentally, and fails to instigate significant changes to reduce emissions.” The NGO noted that government failure to enforce laws and deter factories had resulted in an increase of incidents of accidental pollution and Israel still buries 80 percent of its garbage.