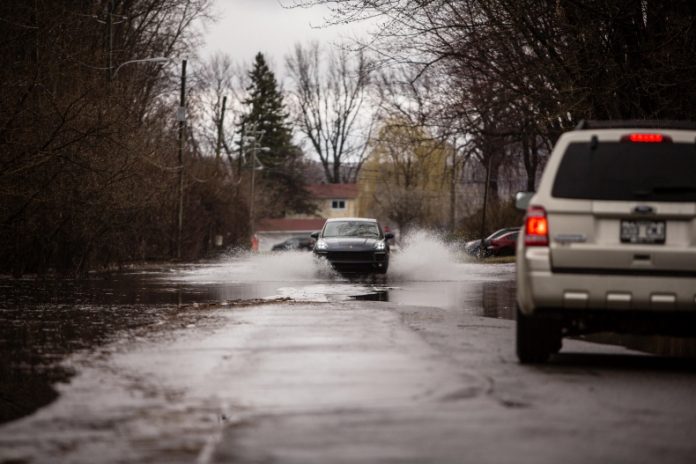 I was driving into Ottawa for an assignment, listening to the news on the radio when a message came in for me from the newsroom.

“Alex, can you go check out the flood zones? There’s one close by in Gatineau.”

It has been an exceptionally rainy month of April so far in the national capital region. When you combine it with all of the melting snow, the Ottawa River is reaching levels that local residents say they haven’t seen in decades.

And while I know that individual weather events can vary, there’s no denying that these sorts of events are becoming more frequent because of our changing climate.

There were areas flooded just a few kilometres from Parliament Hill on the Quebec side of the river. That includes areas just west of Gatineau, in the Pontiac region as well as on the east in municipalities that are further away such as Saint-André-Avellin and Rigaud in Quebec.

As of Friday morning, Rigaud, a municipality about 45 minutes west of Montreal, had declared a state of emergency with flooding that was affecting over 300 homes.

A bit closer to Ottawa, I decided to head out to Boulevard Hurtubise, on the east side of Gatineau. I heard on the radio newscasts that city crews were springing into action and starting a voluntary evacuation of the area.

Locally, Radio-Canada was reporting that about 80 homes were affected. The city set up a shelter at a local community centre.

City officials also told Radio-Canada that about 30 homes had water damage and at least four households needed to be relocated and offered assistance by the Red Cross.

Getting on site to capture images was trickier than expected. Many of the roads leading to Boulevard Hurtubise were also flooded, and I drive a small car.

It also quickly dawned on me that I was not prepared for a flood zone, as I did not even have rain boots with me when I left for the other assignment that morning. After trying my luck in the deepest waters this little car had ever been in, I did manage to reach the site where the city had set-up a Société de Transport de l’Outaouais (the local transit agency) bus to transport evacuees.

This SUV did not have too many problems driving up the street from Boulevard Hurtubise, seen at the back of the picture. I was not as confident for my car, however, until I witnessed another small car cross successfully. Photo by Alex Tétreault

From there, the road along the river was closed. The Gatineau fire department crews were going in with pick-up trucks to assist citizens that needed help and city crews were bringing in sandbags. I was able to walk a few hundred metres to the first area where the road was submerged, but being bootless and unprepared, I had to retreat. 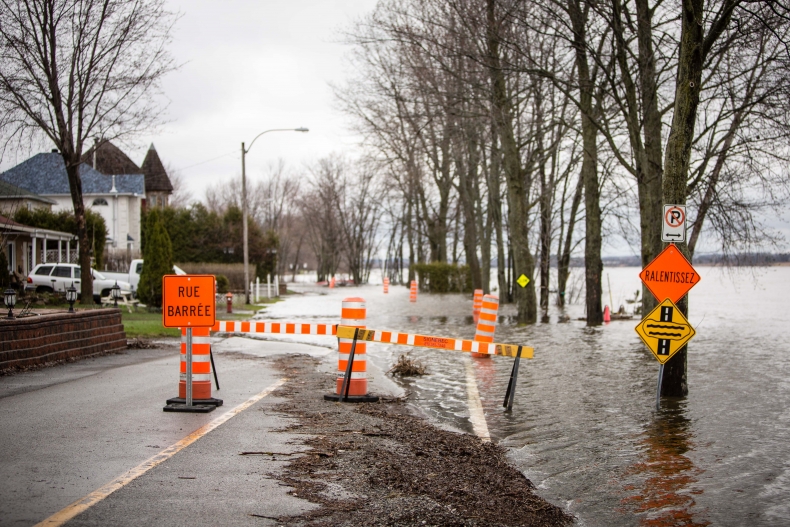 This is as far as this ill-equipped photojournalist made it on foot before having to head back to the temporary command station set-up by the City of Gatineau. Photo by Alex Tétreault

That’s when I ran into the fire crew from a local station, “Caserne #4 Jean-Claude-Charbonneau.” They introduced me to their chief, of operations, Gilles Vekeman.

I asked them if I could tag along on their next patrol of ground zero, promising not to interfere with their work. The chief agreed, and off I went with firefighters Éric Séguin and Marc-Antoine Poissant in a much more capable truck than my compact car. They were on a mission to help a local resident who was unable to make it back home on his own. 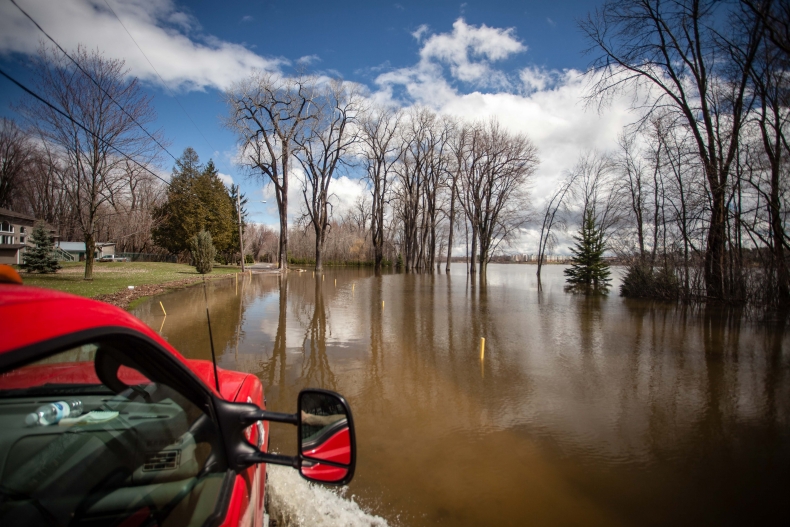 Even though by now the sun was piercing through the cloud and the worst of the day’s flooding was behind us, I was glad to be in this much more capable Gatineau fire department truck than my little car for this assignment. Photo by Alex Tétreault

By this time it was already passed noon, and the water levels appeared to be dropping. Residents had their fingers crossed that the rain would be held at bay on this cloudy day. Still, as the truck was wading through water on the road, of which some chunks had been washed away, we saw some sights you don’t always expect to see on your daily commute. 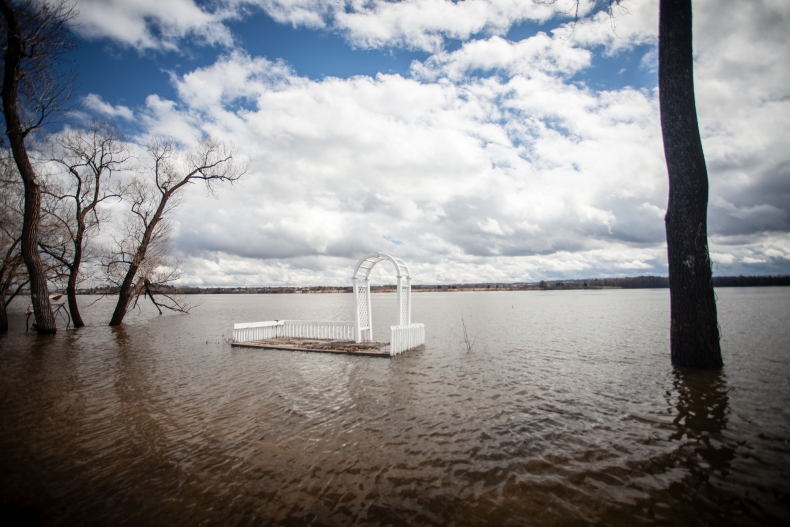 I was able to capture some surreal looking scenes from the fire department’s vehicle along Boulevard Hurtubise. This arched platform would make for an interesting wedding ceremony with a great view on the river. Photo by Alex Tétreault

We eventually reached our destination and the firefighters dropped him off while I took a few more pictures.

Eventually, we made our way back. I could tell that the municipal workers, the police and firefighters, were motivated to lend a hand — even for those who had started work shifts at 5 p.m. the day before.

The Caserne 4 crew got together for a quick group picture before I went off. 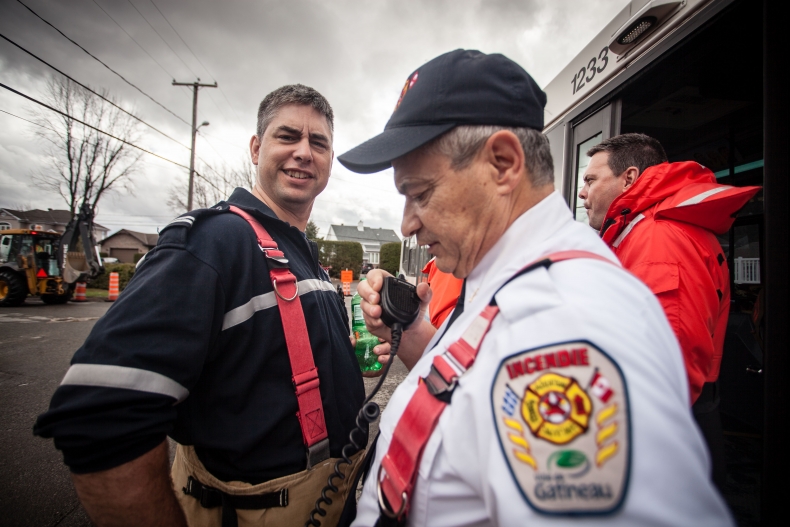 The Quebec government has announced that up to 72 municipalities will be eligible for financial aid this year for the spring flooding that’s occurring. While the river appears to be receding, some local residents do not think they are out of the woods yet as there is still much snow left to melt in the northern regions of the Ottawa River basin.

Anyone looking for information or assistance from local municipalities can consult the Gatineau city website here or the city of Ottawa’s local website over here.

Here are more images of the flooding. 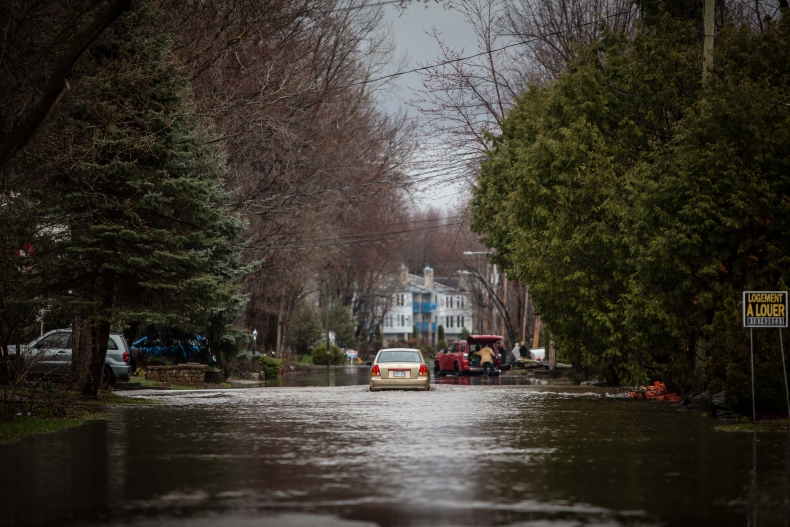 A section of Boulevard Hurtubise in Gatineau, Quebec, is still submerged on Friday morning. Nonetheless, this compact car’s driver took a chance and made it through. Photo by Alex Tétreault 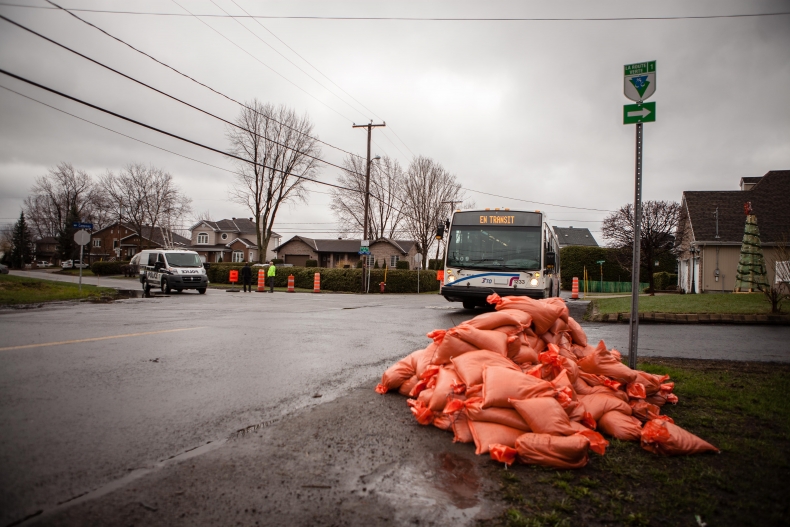 Boulevard Hurtubise forks to the left, but is closed off at the intersection, as seen in this image. City of Gatineau authorities have set up a public transit bus as a shelter and transport for possible evacuees and were stockpiling sandbags to be used if required. Photo by Alex Tétreault 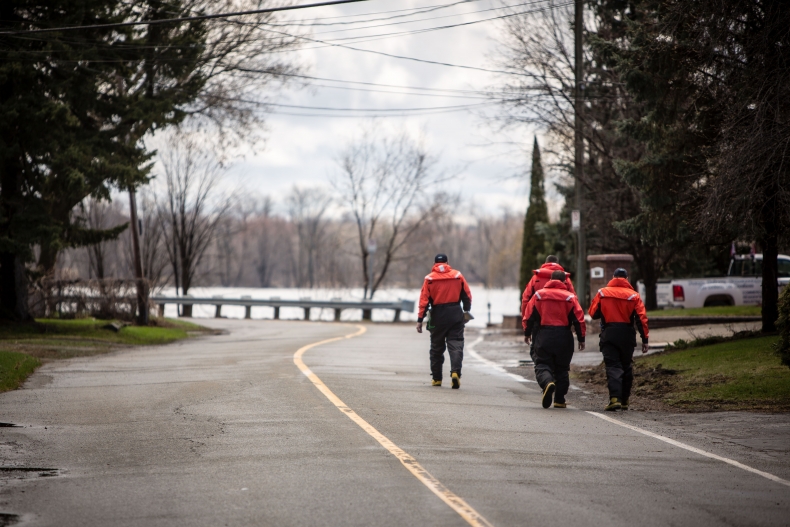 The Caserne 4 crew was wearing its marine intervention gear as a safety precaution in the morning, at the peak of the flooding. Photo by Alex Tétreault 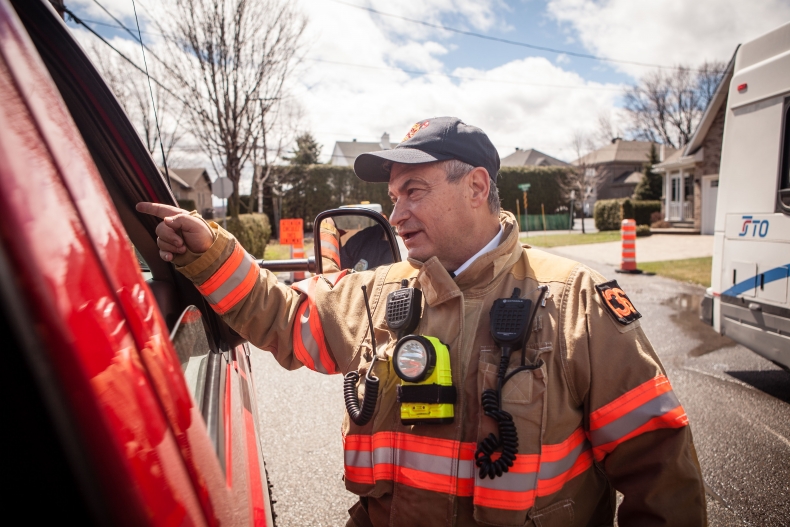 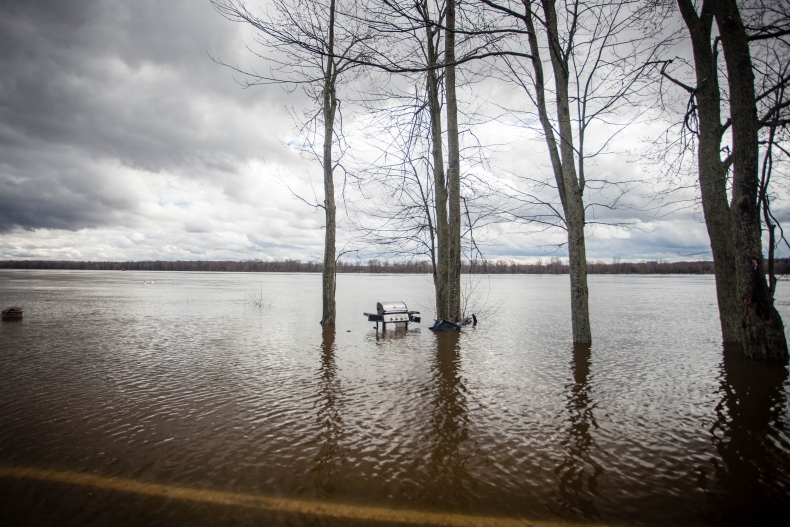 BBQs tend to come out once the snow melts, but it would seem BBQ season will be a bit delayed for the owner of this lonely looking one. Photo by Alex Tétreault 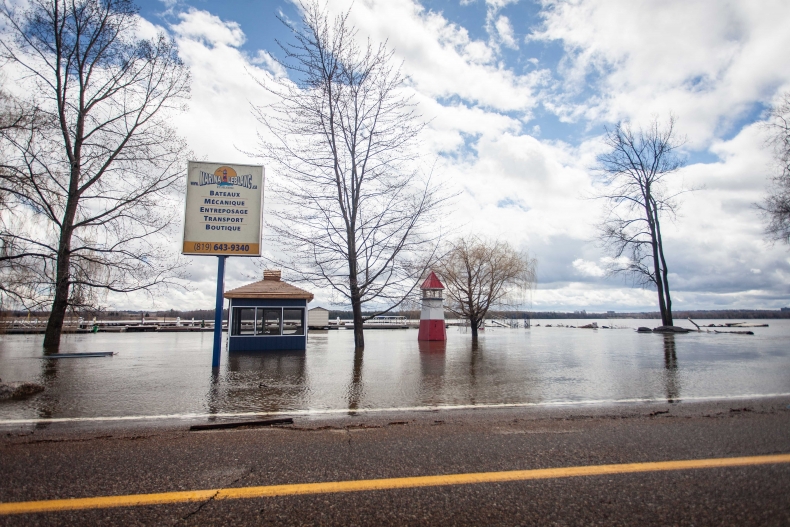 Marinas cannot really function without water, but this is a bit much. Photo by Alex Tétreault 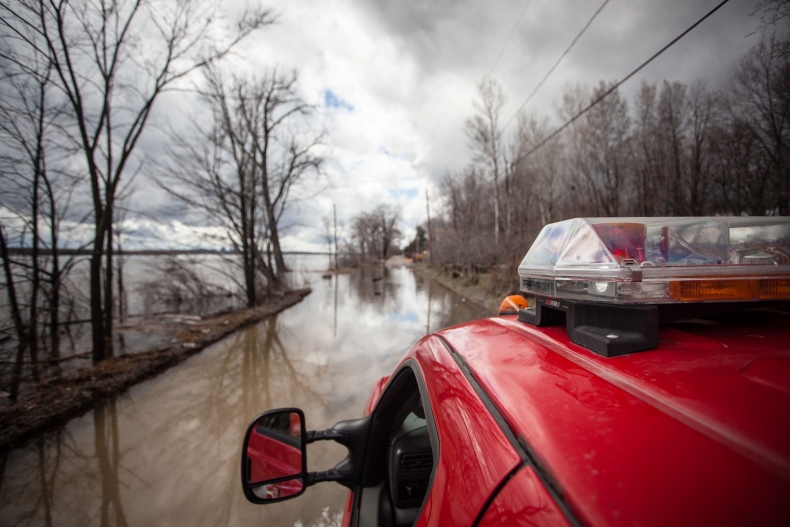 The Gatineau fire department’s truck had no problems wading through the water on the flooded Boulevard Hurtubise to assist the local residents. Firefighters Éric Séguin (driving) and Marc-Antoine Poissant had been on duty since 5 PM the night before. 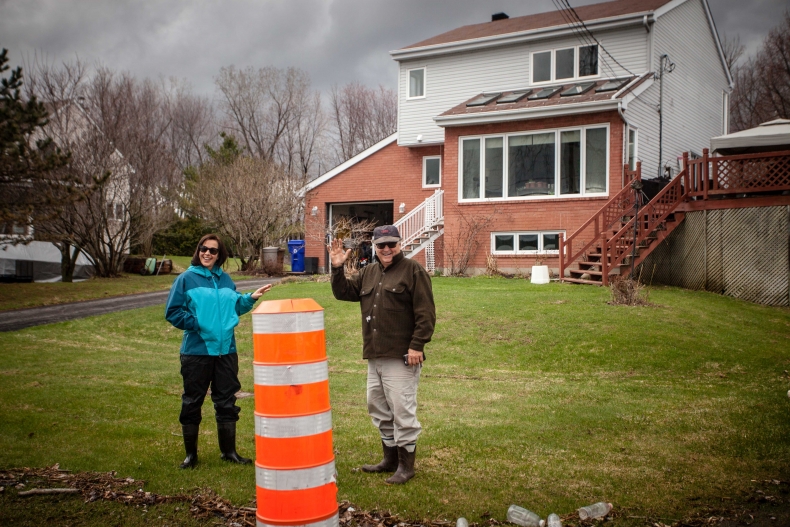 Some local residents remain in good spirits, at least at the sight of the fire crews. Photo by Alex Tétreault 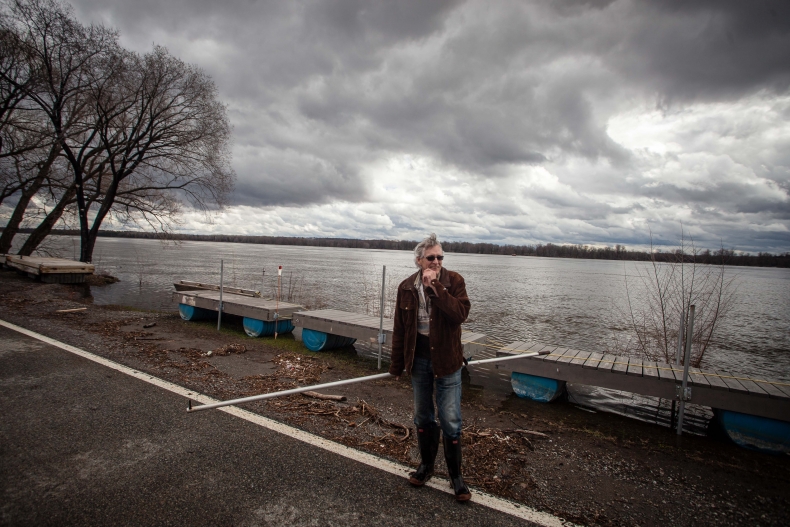 Some of the locals were already getting started on cleanup efforts. This man was catching debris with his perch. Photo by Alex Tétreault 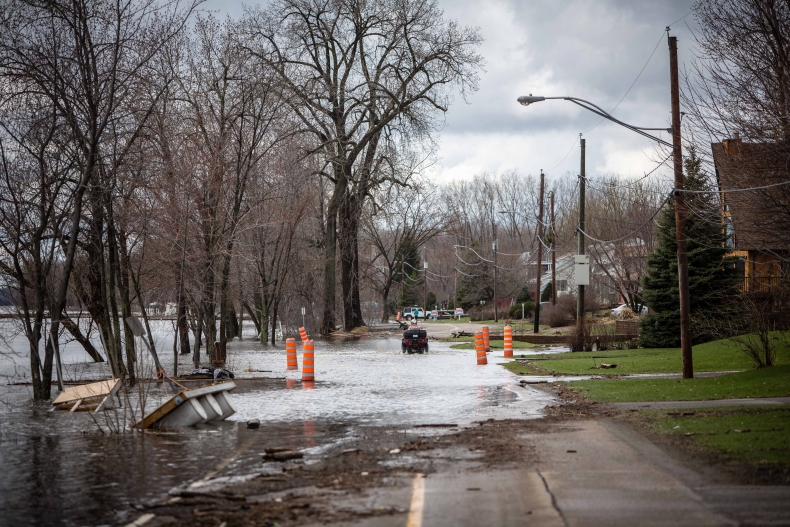 Others were using alternative means of transportation to get by, such as this ATV going up and down the road through the water and washed up debris. Photo by Alex Tétreault 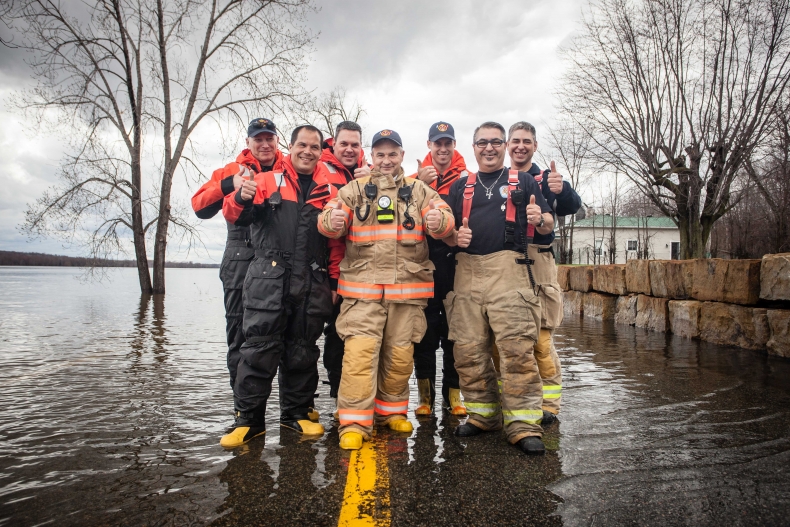 I would like to personally extend a big thank you to the Caserne 4 crew for letting me tag along. Photo by Alex Tétreault