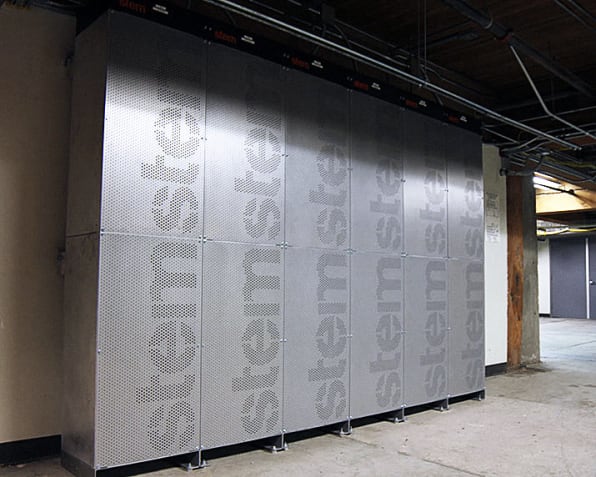 Con Ed organized an auction for “demand response capacity” and awarded contracts to a variety of energy storage and efficiency startups. It reasoned that, if it could cut the amount of power high-users were taking off at certain times of the day, it could reduce the need to build out the network. Grids are typically designed with massive inefficiencies. They have to be extensive enough to deal with peak times–like in the middle of the afternoon on hot summer days–as well all the other times when air conditioners aren’t going as strongly. Con Ed estimates that building a new Brooklyn-Queens substation would have cost $1.2 billion, but that investing in efficiency and storage could cut that to just $200 million.

Stem, an energy storage startup in Millbrae, California, was one of the winning bidders in New York. And it offers a model for how grids and individual users can save money by installing electricity load management systems–i.e. batteries. Stem has installed large-scale lithium ion batteries in commercial 600-plus sites, mostly in California and Hawaii, and developed sophisticated software to help manage the flow of electrons across these systems. This allows individual companies like Wells Fargo, Safeway, and Whole Foods to avoid demand charges: penalties that utilities charge for spikes in usage. And it allows grid operators to build out less redundant capacity, including gas-fired “peaker plants” that operate only for a few hundred hours a year. (The U.S. Energy Information Administration says there are about 121 gigawatts of such plants, contributing 3% of overall demand).

Stem’s batteries store electricity when it’s cheapest–for example in the middle of the night when grid power tends to go down in price, or in the middle of the afternoon, when solar panels are maximizing their output. By networking the sites together, the storage becomes a valuable additional power reservoir on the grid. John Carrington, Stem’s CEO, calls the service a “virtual power plant”–a resource that companies can call up when other sources of electricity are expensive or unavailable.

Stem has deployed about 100 megawatts of storage so far, often funding the work via its own investment partners, including Starwood Energy Group, which committed $100 million last year. Customers, therefore, are able to pay for storage as a monthly energy service, rather than as an upfront investment, making storage an easier sell. (Indeed, energy storage is a good example of how turning a product into a service makes it more sustainable). 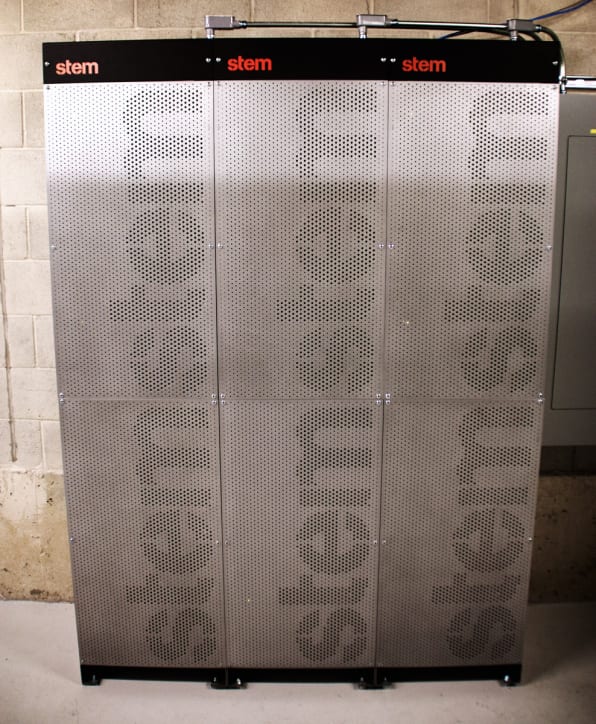 “We’re effectively leasing this to our customers,” says Carrington. “It becomes an operating expense versus a [capital expenditure] discussion. It’s a monthly payment, rather than buying the whole system. We’ve sold only about 2% of our systems on a cash basis, because we wanted to bundle up the fleet and sell the [capacity] to utilities.”

California is far and away the biggest energy storage market to date. In 2013, it passed a law (AB 2514), requiring utilities to invest in large-scale storage, including the systems offered by Stem and competitors like Advanced Microgrid Solutions. Last year saw a wave of project financing for such projects, allowing corporate customers to install equipment without having to pay upfront.

The storage boom is driven partly by California’s difficulties in managing its renewable generation. Its solar farms and rooftops now generate so much electricity during the day that utilities are forced to turn away (“curtail”) power from certain sites; the grid can’t handle the load. But when the sun goes down in the evening, and people come home from work, the grid sees a big spike in demand that renewable energy struggles to deal with (energy wonks call it the “duck curve“). To smooth out the variations, California wants to store more power during the day, so it needs less capacity in the evening.

“There’s so much solar production, they are looking at our systems to absorb that [power] in the middle of the day when it can’t all be used,” says Carrington. “We can ramp up [supply to our customers] more quickly than a power plant.”

It’s early days for energy storage, even in California where it’s mandated by law. To meet 50% of the state’s electricity needs by 2030, it will need to install about 11 times more capacity than it has now, or 66 times more than what the entire U.S. has at the moment, one study showed. But Stem’s success in signing up energy users and investors, and the faith in storage shown by Con Ed (and New York state regulators), shows the potential.