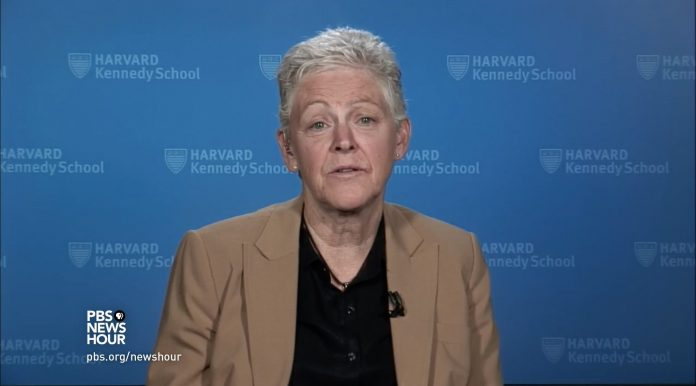 JUDY WOODRUFF: And now let’s hear from the prior administrator of the EPA, who essentially led much of President Obama’s efforts during his second term.

Gina McCarthy is now a fellow at the Institute of Politics at Harvard’s Kennedy School of Government.

She first shared her reaction to the announcement.

And my reaction is that it’s pretty disappointing and a little bit embarrassing to have signed that executive order. But there’s a lot of time in between here and actually undoing the legacy of President Obama on this.

And I want people to understand that reality, in terms of where we’re going, it’s going to be a difficult slog for this administration to undo the great work that we did the prior eight years.

JUDY WOODRUFF: Well, President Trump is saying this is all about bolstering the energy industry, bringing jobs back that he issued have been decimated by the unnecessary rules and regulations and restrictions during the Obama administration.

GINA MCCARTHY: Well, Judy, we have heard that tired story for a really long time.

And I know that, since EPA has been around, we have reduced air pollution 70 percent, while we tripled the GDP. And I think nobody in this country is really willing to go back to a time when the air was polluted and the water was polluted.

And we don’t have to for jobs. We certainly know that, particularly when it comes to clean energy. The reality is that clean energy is fiscally responsible today. It’s being chosen by many states and utilities and mayors. Already, that is where the investment is heading.

That’s where jobs are. We know that the solar industry is growing 12 times faster than the overall economy. So, if you really want to do something for the business community and for jobs, why aren’t you investing in clean energy and doubling down on what we proposed?

JUDY WOODRUFF: Well, how does that square, though, Gina McCarthy, with what President Trump is saying? He is saying what has happened with this so-called Clean Power Plan that you and President Obama helped to institute is that jobs that have been lost.

And he’s talking — he said — at one point, he said today no single regulation has threatened miners more than that one.

GINA MCCARTHY: Well, I think he has to look at the history of the coal mining industry, and not try to produce rhetoric that gives them comfort.

What they really need is support in the transition that’s already happening, with or without the Clean Power Plan. We know that the industry has been struggling for awhile. The simple fact is that it’s not competitive now. That’s why it’s not successful in the market.

That’s why you see companies, mining companies going out of business. So, it’s time to get real with those people and offer them support they need, but not simply say that climate change isn’t happening or that EPA is taking away those jobs.

I mean, let’s look at the popularity of this proposal when it goes out. I know that 70 percent of the people in this country understand that the climate has changed, and they are looking forward to us regulating utilities to make sure they’re not polluting.

And that is certainly a significant number. In fact, it’s twice the popularity of this president. And so let’s look at how people react to it.

I think people know that it’s all about the future, not about looking at the past, where we have to go with jobs. And none us want to leave any community behind. But you’re not going to do it by sending signals that are simply a signature on a page.

There’s a huge amount of work between what we did to build our clean energy future and what it’s going to take to actually meet the promises of this executive order. It’s lots of hard work, many years. It’s denying the science. It’s developing facts that don’t exist.

And so I’m pretty confident that, despite this signature, the Obama legacy on clean energy will be strong at the end this and any administration, because that’s where the world is going. That’s where U.S. strengths should be. That’s where we should be investing and innovating.

JUDY WOODRUFF: What about the many lawsuits, Gina McCarthy, that have been filed by different states against the EPA, against you, the president, when you and President Obama were in office?

The argument is made that that says that you just — for all the good intention, that you didn’t fully appreciate the impact that these restrictions would have on real people, real lives, real jobs?

GINA MCCARTHY: Well, I think the thing we need to point to, again, is, what is reality here?

I know that many of the states that sued EPA saying that these levels were unrealistic to achieve are already achieving the reductions that we were going to require in 2022. And they are achieving them today, because we did a very good job of outreach in understanding and educating ourselves about the energy transition that was already happening.

We knew that renewables were getting competitive in many states. We knew that energy efficiency was available and opportunities to reduce energy demand. We also knew that inexpensive natural gas was continuing to compete against coal, and compete successfully.

So, we never expected this to be the complete answer, Judy. We never pushed it beyond where we thought the energy world was heading. And right now, as I said, you are seeing states achieving levels in 2022.

How bad could our rule have been, how unreasonable could anyone think that is, when we are already there in so many states? The simple fact is that many states sued us, again, as a symbolic gesture. And what you need to look at is, where are utilities spending their money? What is fiscally responsible now? What’s available to them? What are they already doing?

And if you look at it in reality, you will see that they’re investing in a low-carbon future already. And what we really need to do is continue to provide opportunities for lower-cost, clean energy moving forward, and we will meet our obligation to our kids’ future to address the challenge of climate change in a way that will keep our energy sector strong and reliable.

JUDY WOODRUFF: Gina McCarthy, who is the former administrator of the Environmental Protection Agency, thank you very much.