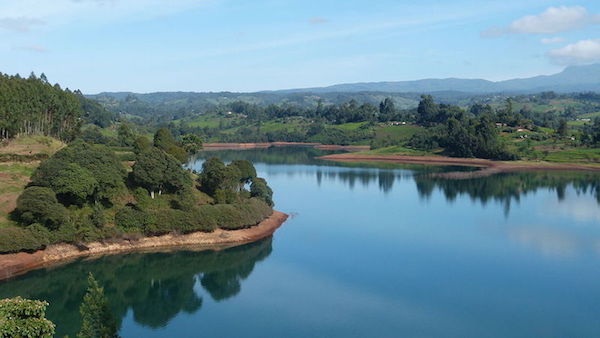 Four months of water rations and a prolonged drought have left residents of the Kenyan capital Nairobi grappling with dry taps in their homes and offices.

Since 1 January, the government-run Nairobi Water company has been distributing water piecemeal to more than 3 million residents.

In December, Ndakaini dam – the source of 84% of Nairobi’s water – was only 48% full. Nairobi Water said the rations would ensure that the declining water stored in Ndakaini reached every resident.

The water company projected that by April, the levels in the dam would have risen to normal capacity, replenished by Kenya’s long rains, which traditionally begin in March and fall until May.

But the rains have not arrived and water levels earlier this month at Ndakaini Dam had fallen to a low of 25%. By April 18, despite occasional showers in the city, the rationing programme was still in place.

According to Nairobi Water’s distribution programme, some parts of Nairobi are receiving water for as little as 12 hours a week. Only a few areas such as the Jomo Kenyatta International Airport are receiving an uninterrupted supply.

Companies seeking water for manufacturing or office use have had to fill their tanks using water transported by bowsers run by private firms, which comes at a higher cost. According to a report by Cytonn Investments, the water shortage was likely to have resulted in job cuts.

Nairobi residents, especially those who cannot afford a means of storing water when it is available in their area, have had to spend extra money to buy the commodity from private vendors. A 20-litre container has been selling for between KES20 and KES100 ($o.20-$1) – a 9000% mark up on the current city tariff.

Nairobi Water’s corporate communications manager Mbaruku Vyakweli said sufficient rain was yet to fall in the Aberdare Forest and around Mount Kenya – the main water catchments for the Thika, Githika and Kayuyu rivers which feed into Ndakaini dam – 82 kilometres away from Nairobi.

“The catchment areas are still dry and we are praying that it rains soon,” Vyakweli told local newspaper The Star.

March to May – known as the “long rains” – are normally wet months in Kenya. But in recent years, peak rainfall season has begun in late April.

In March, the Kenyan Met Office predicted the 2017 long rains would fail entirely across large parts of the country.

The crisis comes on the back of a drought in 2016 when the “short rains” of October to December failed to reach some parts of the country. Some areas were severely affected enough for president Uhuru Kenyatta to declare a national disaster.

Recent research from the World Weather Attribution (WWA) project found that additional heat from climate change had exacerbated the 2016 drought by increasing evaporation from the soil.

This year’s water shortage in Nairobi also comes not long after an equally severe shortage that hit the capital in 2011. Eugene Wamalwa, the cabinet secretary in charge of water and irrigation, said the dam capacity witnessed in April mirrors the all-time-low recorded in 2011.

Samwel Mwangi, the deputy director of the Kenya Meteorological Department, told Climate Home a multiplicity of factors were behind the shrinking of volumes in Nairobi’s main reservoir.

“We need to factor in the human population pressure on the natural environment. With the increase in population, natural resources are stretched. You have people clearing forests to do agriculture and all that. All these things affect the way the weather behaves. We are building more cities and all that; so these things have a bearing on how weather and climate behave,” he said.

Currently, 220,000 households in Nairobi are supplied with water and the Nairobi Water Company pumps 550,000 cubic litres a day. As the population and economy grows, that infrastructure is struggling.

“If you look at the population of Nairobi from 2011 to now, you realise there are quite a few changes. The numbers are going up. The water demand is higher,” said Mwangi. He said he was certain there would be a similarly acute shortage within a few years.

Scientists from World Weather Attribution (WWA), who analysed counties in the northwest and southeast parts of the Kenya, agreed.