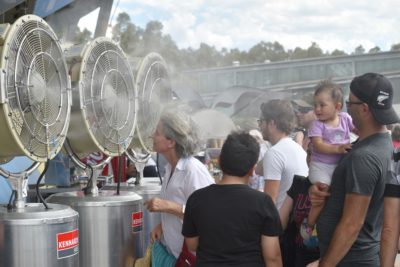 Southeast Australia just had its hottest summer on record: temperatures in some areas hit 35 degrees C (95 degrees F) more than 50 days in a row. And climate change, researchers with the World Weather Attribution project have been able to say, was probably to blame. Average temperatures like those in the 2016/17 Australian summer are now 50 times more likely than before global warming began.

Results like these help to hammer home the real-world impacts of climate change, such as heat waves, droughts, and episodes of extreme precipitation. And researchers are getting ever-better, and faster, at providing them.

The roots of weather attribution go back to 2004, when Peter Stott of the United Kingdom’s Met Office and colleagues published the first big paper blaming climate change for a weather-related disaster: The deadly 2003 European heat wave had been made at least twice as likely, they concluded, as a result of human-caused global warming. “Many thousands of people died who shouldn’t have,” says Stott. “It really highlighted the vulnerability of relatively rich countries like the U.K., France, and Switzerland.”

Before Stott’s 2004 paper, researchers had been hesitant to attribute any one weather event to climate change, since the weather is so chaotic and varies so much, naturally, from year to year. In the dozen years since, researchers have made huge progress in untangling how much of an impact rising levels of carbon dioxide in our air have on the likelihood or severity of any given weather event. When Stott and colleagues took another look at the 2003 heat wave in a 2015 paper, better models and an even-warmer world allowed them to say the odds of such an event have not just “more than doubled,” but have gone up ten times.

‘Sometimes you observe temperatures that would have been almost impossible without climate change,’ says one expert.

The Bulletin of the American Meteorological Society (BAMS) has published an annual report explaining extreme weather events from a climate perspective since 2012, making it easy to see how far attribution studies have come. Its first edition looked at a half-dozen events, from anomalous temperatures to droughts. The most recent 2016 edition tackles more than 20 events ranging from extreme winter sunshine in the U.K. (made 1.5 times more likely by climate change) to an extreme wildfire season in Alaska (dry fuel conditions were made 34 to 60 percent more likely by climate change). Scientists can now tackle smaller weather events, to better separate the impact of natural climate wobbles like El Niño, and to start addressing more complicated systems like cyclones.

At the cutting edge of these analyses are projects aiming to attribute bad weather to climate change as extreme events are actually happening, not a year or a decade later. The World Weather Attribution (WWA) project, started in 2014 with support from the non-profit research and news organization Climate Central, aims to crank out results in real time, when disasters are in the news, relief organizations are paying attention, and funds for future aid relief might be easier to mobilize. So far they have tackled a dozen events, with their record-holding analysis clocking in at just five days. “The point is to provide scientific evidence to the public debate,” says WWA scientist and climate modeler Friederike Otto of the University of Oxford. “These debates happen in the direct aftermath.”

The WWA’s fastest analysis to date provides a peek at the challenges faced by researchers in attribution science. It was December 2015, and Atlantic storm Desmond rolled in to the U.K.’s northwest coast. Flooding and landslides stopped trains, ruined homes, and cut electricity for tens of thousands of people. At the same time, climate scientists happened to be sitting in Paris hammering out terms for the Paris climate accords, aimed at holding global warming below 2 degrees C. The WWA wanted to emphasize the impacts of climate change to help the Paris discussion along. The worst of the rain fell on the 5th of December; Otto and her colleague bashed out their report by the 10th. “We basically worked through the nights,” says Otto.

Their first task was simply to define the event, which is trickier than it seems. “Is it rainfall over two weeks, or in one day, or this area, or further upstream?” says Otto. “That’s not straightforward.” In Africa, for example, it is often not the severity of droughts that causes a problem, but rather the lack of time between dry spells for soils to recover. Exactly how you define an event will affect both the results and how easy (or possible) it is to attribute it to climate change. In the case of storm Desmond, the flooding was essentially the result of a single, 24-hour deluge.

Scientists may be on firmer footing asking whether any specific event was made worse by climate change.

The next challenge is collecting sufficient data. In some places it simply doesn’t exist; the best data set the WWA had to analyze for the recent drought in Somalia, for example, encompassed only 20 rain gauge stations for all of eastern Africa, supplemented by satellite data. Other times it is access that’s a problem. For storm Desmond, the WWA had to rely on a single open-access weather station in Scotland, says Otto, and fill in the gaps with forecasts until the rainfall data was released a month later.

Then, of course, the researchers need models to tell them if the unusual event is becoming more common. The WWA uses several models for each case study, since each has its strengths and weaknesses. The idea is to run simulations of both the real world, and of an imagined world without climate change, to compare the probabilities of such an extreme event. For storm Desmond warm Arctic conditions of 2016 — have proven more dramatic and conclusive. For all these, climate change very much increased the odds.

Heat waves are the easiest type of event to pin on climate change. This is in part because the highest extreme temperatures reached in a region tend to have an obvious upper bound. “Sometimes you observe temperatures that would have been almost impossible without climate change; the probability was almost zero before,” says WWA scientist Geert Jan van Oldenborgh of the Netherlands Meteorological Institute. Though researchers are still dealing in probabilistic statements, for those events they can basically say, “Climate change did it”.

It also helps that scientists understand the physics of how climate change leads to warmer temperatures. For other kinds of events, both researchers’ understanding of physical effects (like how fast sea ice melts, or how clouds work), and the ability of models to replicate those effects, are worse. According to a 2016 U.S. National Academies report, attribution gets harder and harder as you move down this list: droughts and extreme rainfall, extreme snow and ice, tropical cyclones, wildfires, and big storms.

Even heat waves can pose complications. In the WWA’s study of the Indian heat wave of 2016, for example, they saw a strange bump in mean temperatures without an increase in maximum temperatures. That might be explained by air pollution reflecting sunlight and cancelling some of the greenhouse effect, Otto guesses. “We don’t really have climate models with reliable aerosols,” she says. “So we can’t test this, we can only speculate.”

Not every study, of course, finds an impact from climate change. About 35 percent of BAMS reports since 2012 fall into this camp. The WWA has tackled cases, like the 2016 drought in Somalia, where the model results disagreed with each other so much that they couldn’t tell if climate change was having an effect or not. For the 2014 drought in São Paulo, Brazil, WWA found that climate change probably didn’t have an impact, but rather that increased rainfall and evaporation cancelled each other out. “That’s actually quite useful for people to know,” says Otto, since it means policymakers can tackle other drivers of drought, like increases in water usage.

Rapid attribution is still controversial. When the WWA submitted its analysis of the Desmond storm to an open review journal, Otto says, “about half of them [reviewers] said it can’t be right because it’s so fast. But we have done it quite a few times now and the protest has gotten quieter.”

Sweltering temperatures in Australia in January 2017 forced attendees at the Sydney International tennis tournament to cool off at fans. PETER PARKS/AFP/GETTY IMAGES

Others take issue with attribution methodologies. Roger Pielke Jr, a political scientist at the University of Colorado Boulder, would rather rely on the statistics of how we have seen extreme events change so far. “I am always going to favor actual observations of extremes over modelled results,” he says. But extreme events are by definition rare, so it takes a long time for data to accumulate. In the Intergovernmental Panel on Climate Change’s special 2012 report on extreme weather, scientists found that compared to 1950 there are now more hot days, fewer cold nights, and more heavy rainfall in some parts of the world. “Tropical cyclones, floods, drought, tornadoes — not so much,” says Pielke.

Kevin Trenberth of the National Center for Atmospheric Researchargues that scientists are on firmer footing asking whether any specific event, once underway, was made worse by climate change, rather than asking whether it was made more likely in the first place.

“The dynamics are really tricky,” explains Trenberth. Studies that try to capture things like storm physics are so fraught that the studies end up low-balling the impact of climate change, he says. It is simpler and more compelling, Trenberth argues, to focus on the basic thermodynamics: It is warmer now, so the atmosphere is wetter (air can hold about 7 percent more moisture per degree Celsius of warming); the water-hungry air dries out the ground more quickly, leading to increased risk of droughts and wildfires; and the extra moisture fills up rain clouds, leading to increased risk of floods.

Pinning the likelihood of a drought or flood on climate change helps convince the public that the effects of emissions are tangible.

Such analyses show, for example, that because of warmer seas pumping more moisture into the clouds, about 25 percent more rain fell during the 2016 Louisiana floods than would have fallen in cooler conditions. That is a more useful piece of information, Trenberth argues, than the WWA’s pronouncement that the event was made 40 percent more likely by climate change, since the likelihood of the event was very low in the first place. It’s like saying that some toxin increases your chance of getting brain cancer by 40 percent: it sounds scary until you realize that your chances have gone up from, say, 1 percent to 1.4 percent.

Otto and others disagree with Trenberth; the statistics of likelihood, they argue, are what the public wants to hear. “If you are trying to figure out how much to invest in snow plows you need to know what the risk of heavy snow fall is for next time,” agrees Stott, who provides some oversight for the WWA but isn’t involved directly with its studies.

Regardless of how attribution research is done, scientists are coming to a consensus that it is both possible and useful. Pinning the likelihood of a specific drought or flood on climate change helps to convince the public that the effects of human carbon dioxide emissions are tangible, says Stott.

“I think there is no longer great controversy about the idea of event attribution,” Stott adds. But there is still “plenty of lively discussion” about the best way to do it.