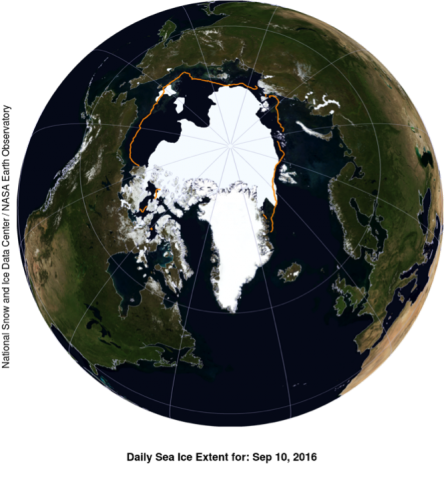 This image shows a view of the Arctic on September 10, 2016 when sea ice extent was at 4.14 million square kilometers (1.60 million square miles). The orange line shows the 1981 to 2010 average extent for that day. The black cross indicates the geographic North Pole. Sea Ice Index data. About the data. Credit—NSIDC/NASA Earth Observatory. High-resolution image

“It was a stormy, cloudy, and fairly cool summer,” said NSIDC director Mark Serreze. “Historically, such weather conditions slow down the summer ice loss, but we still got down to essentially a tie for second lowest in the satellite record.”

“It really suggests that in the next few years, with more typical warmer conditions, we will see some very dramatic further losses,” said Ted Scambos, NSIDC lead scientist.

During the first ten days of September this year, the Arctic lost ice at a faster than average rate.  On average, the Arctic lost 34,100 square kilometers (13,200 square miles) per day compared to the 1981 to 2010 long-term average of 21,000 square kilometers (8,100 square miles) per day. The early September rate of decline also greatly exceeded the rate observed for the same period during  the record low year of 2012 (19,000 square kilometers, or 7,340 square miles, per day). By September, the air is cooling and there is little surface melt. This argues that that the fairly rapid early September ice loss was due to extra heat in the upper ocean. Recent ice loss was most pronounced in the Chukchi Sea, northwest of Alaska. NSIDC scientists said ice may also relate to the impact of two strong storms that passed through the region during August.

“This has been an exciting year with several record low extents reached during winter and early summer but thanks to a colder than average summer, more ice remained than at the end of 2012,” said Julienne Stroeve, NSIDC senior scientist. NSIDC scientists said there was a lot of thin ice at the beginning of the melt season, because thinner ice does not take as much energy to melt away, this may have also contributed to this year’s low minimum extent.

Please note that the Arctic sea ice extent number for 2016 is preliminary—changing winds could still push the ice extent lower. NSIDC will issue a formal announcement at the beginning of October with full analysis of the possible causes behind this year’s ice conditions, particularly interesting aspects of the melt season, the set up going into the winter growth season ahead, and graphics comparing this year to the long-term record.