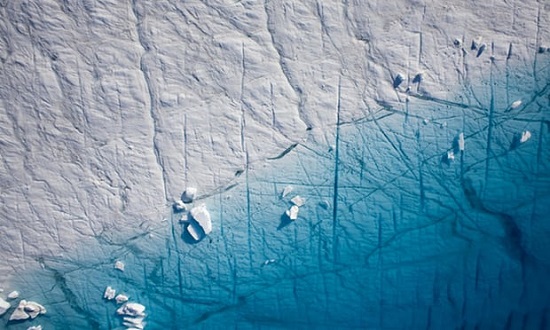 A chronological listing of news articles posted on the Skeptical Science Facebook Page during the past week.

How close the world is to a catastrophic collapse of giant ocean currents is unknown, making halting global warming more critical than ever, scientists say

Other research this week showed that Greenland’s massive ice cap is melting at the fastest rate for at least 450 years. Photograph: Nick Cobbing/Greenpeace

Serious disruption to the Gulf Stream ocean currents that are crucial in controlling global climate must be avoided “at all costs”, senior scientists have warned. The alert follows the revelation this week that the system is at its weakest ever recorded.

Past collapses of the giant network have seen some of the most extreme impacts in climate history, with western Europe particularly vulnerable to a descent into freezing winters. A significantly weakened system is also likely to cause more severe storms in Europe, faster sea level rise on the east coast of the US and increasing drought in the Sahel in Africa.

The new research worries scientists because of the huge impact global warming has already had on the currents and the unpredictability of a future “tipping point”.