Home News A conundrum: our continued presence on Facebook

You’re bound to have seen the recent news about how Facebook keeps favoring climate science denial by misguided decisions like creating fact-checking exemptions for climate deniers or restricting which content actual climate scientists can boost on their pages. This is of course outrageous behavior. Reactions to these articles when we shared them on our own Facebook page make it clear that many of our Facebook followers and readers share this sentiment. 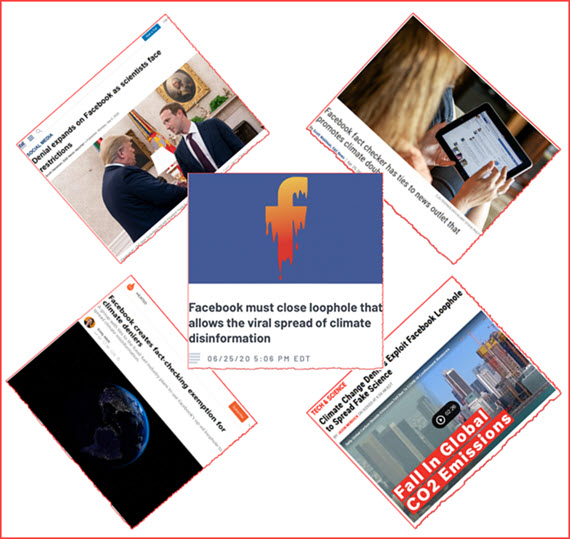 And this leads “nicely” to the conundrum mentioned in this blog post’s title: are we aiding and abetting Facebook’s continued disregard of fact-checks – and thereby letting misinformation run wild – by staying on the platform? This question is especially relevant for our team as our main raison d’être is fighting misinformation about human-caused climate change and Facebook is actively inhibiting ours and others’ means to do just that. We’ve been having discussions about this within our team on and off but things seem to be coming to a head sooner rather than later if these recent articles are any indication. So, in an effort to share what we’ve been mulling around for a while, we decided to publish this blog post. Please feel free to use the comments to provide feedback to help us make a decision down the line. 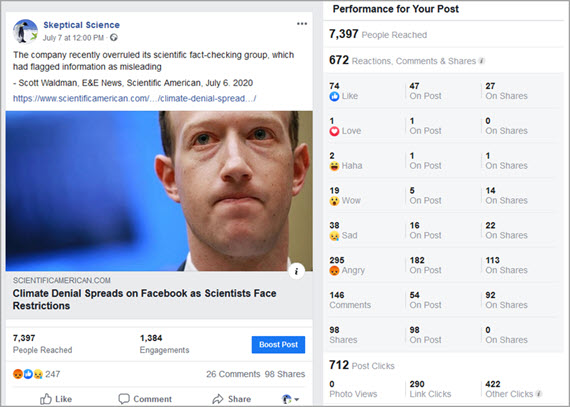 At first sight, the logical reaction should be to just close our page and leave Facebook for good, removing Skeptical Science as an attractant to Facebook users – we do have 188K+ followers there right now. The sole mechanism likely to swerve Facebook’s behavior is loss of eyeballs, loss of logins. Engaged users are after all the company’s central product line and hence significant loss of users is the most direct path to taming Facebook. Should enough organizations depart Facebook, the collective effect will begin to tell. But – as is often the case – things are not quite that easy. What would happen if pages and groups like ours just deleted their presence on Facebook? More likely than not, we’d leave the field to the mis- and disinformers and many Facebook users would then be basically at their “mercy”.

In the sense of being unable to leave the field open for others to take over, we’re somewhat in the same trap as the rest of Facebook’s users. There’s a form of “investment” at stake, something to lose by leaving. For private users it’s social circles. For pages like ours, it’s increased reach and providing factual information for people looking for it.

Are there even any working alternatives to Facebook for what we do and where we could move to? In fact there are. Arguably the most significant is MeWe, similar to Facebook but with important differences beneficial to users. MeWe supports pages, groups and personal connections like Facebook does, but with all the levers of control in your hands. MeWe’s promise is “Your private life is #Not4Sale – No Ads. No Spyware. No BS.” MeWe’s defining claim is that their network is built on “Trust, Control and Love.” There’s more information on MeWe’s About page, their bill of rights and the FAQs. We already have a presence on MeWe but with about 600 followers after about a year and half of operations there, as of this writing it’s obviously not yet a viable move-to option compared to the 188K+ followers we have on Facebook.

Is MeWe perfect? No, nothing’s perfect. Is MeWe better than Facebook? Per respective terms of service and experience of users, undeniably the answer is “yes.” As with all sorts of choices in life, choosing “better” is better, more sensible. And MeWe’s “Bill of rights” does inspire confidence (we think): 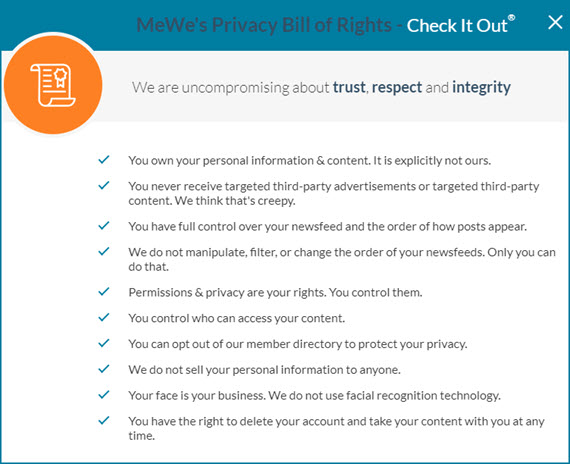 A key difference between MeWe and other social media systems is the absence of AI driving content presented to users. With “engagement” leading to more exposure of advertisements, Facebook and other ad-driven social media systems have an urgent need to keep the attention of users. An effective way to do this is to identify user beliefs and preferences and then to concentrate content to fit a given user’s beliefs and preferences. Unfortunately, this leads to “bubble” effects; users may develop a false perception of the society they live in and indeed reality itself.  A person with an inclination to doubt the facts of climate change will end up being presented with material confirming misperceptions of climate science, ending up with the mistaken impression that climate change is a subject of debate.  MeWe doesn’t apply AI technology on its users,  reducing the harmful effects of “group think”.

For the time being, we’ll stick with Facebook but will also keep on building our presence on MeWe at the same time. For the latter we’ll need your help: the more of you who follow us on MeWe (and perhaps even stop following us on Facebook at the same time), the quicker we’ll reach a kind of break-even point when it starts making sense to make MeWe our major social media presence and to eventually leave Facebook altogether. This of course implies some faith in a broader movement of people making choices about morality and ethics.

One thing is important to remember: this doesn’t have to be a “cold turkey” binary choice. With so many of our family and friends using Facebook, it’s not plausible or reasonable to expect sudden, complete abandonment of Facebook despite the company’s increasingly alienating behavior with respect to social norms and good. But we can easily divide our attention a little bit, and inexorably as that happens others will follow.