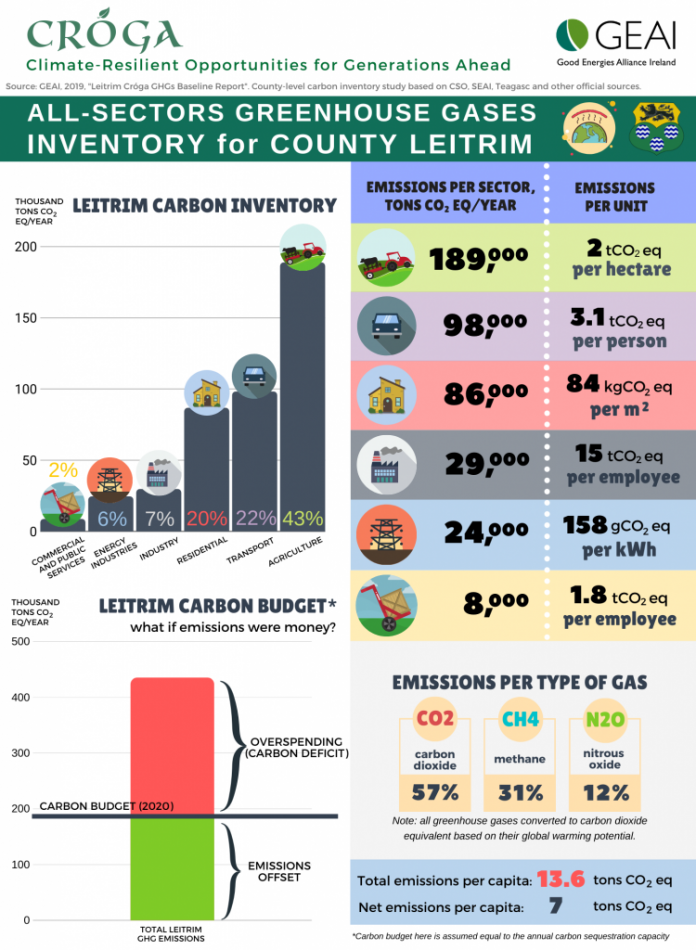 Is County Leitrim really as “green” as it seems? That was the question we sought to answer with a team of young European researchers who spent six months working to produce the first Irish county-based carbon inventory report of its kind, published last December by Good Energies Alliance Ireland.

The study coincided with Phase 1 of a three-pronged initiative
branded Cróga, the Irish word for “brave”, and acronym for
“Carbon Resilient Opportunities for Generations Ahead”. In Phase
2, we initiated climate dialogue sessions to catalyse the local
community in defining a bottom-up climate action plan. Phase 3 will
involve implementing that plan and even replicating it elsewhere.

Why undertake in such an exercise for a county that is peripheral
and small in addressing a topic that is bigger than any nation-state?
Because the climate and biodiversity crisis will continue to be
perceived as distant threats if communities do not have ownership of
what is at stake. Grassroots movements fail if the underlying
challenge doesn’t become part of the living fibre of the community.

Cròga started with science and numbers. Thanks to the meticulous
science of carbon accounting, we found that Leitrim has an annual
carbon deficit of about 225,000 tonnes. This means that, each year,
activities in Leitrim release into the atmosphere 225,000 tons more
than local carbon sinks can absorb. In other words, Leitrim exceeds
its “carbon budget” by 52%.

Those tons stack up, year after year, building up Leitrim’s
carbon debt and, since air-borne molecules know no borders,
contribute to the global carbon debt. If carbon was a currency, the
world would be bankrupt. But industrialised countries continue to
borrow on debt — the recipe for a crash.

Going back to Leitrim, let’s have a look at this infographic:

Agriculture is the heavyweight in absolute terms, but when we
compare sector-by-sector unit-based emissions against the national
average, it’s actually transport and housing that are off the scale
(+21% and +27% respectively), mainly due to the predominance of
polluting vehicles, the low energy efficiency of our building stock
and low-grade fuels. So that’s where the big cuts need to happen.

Ireland is a unique in the European landscape when it comes to agriculture’s share of carbon emissions, accounting for 33% of the national total, compared to an EU average of 10%.* Furthermore, the two greenhouse gases it produces, methane and nitrous oxide, are much more potent in terms of heat-trapping power than carbon dioxide. Hence, any serious climate policy has to deal with this. †

But will the reduction effort, or burden, be shared equally across
the country? That’s a different story.

There is gradient of farming intensity running across Ireland, and emissions levels mirror that. We have a precise figure only for Leitrim, but we can reconstruct other counties’ emissions by looking at farming intensity in terms of livestock units per hectare (LSU/ha) as a proxy for farm-gate emissions, and from this data to sketch an emissions map. ‡

Farming intensity in Leitrim is 0.61 (LSU/ha), with less than an
adult cow per hectare — the lowest in Ireland — while the
threshold for defining non-intensive farming is 1. Most farms in the
North-West qualify as as High Nature Value because they are managed
in a way that sustains the richness of local wildlife (plants and
animals), while curbing flood hazard, purifying water and soil and
storing carbon. HNV farmers not only produce good and proximate food,
but maintain and enhance the ecological balance. They are guardians
of natural functions and cycles.

This ecological work is not reflected in farmers’ income, which
in the North-West is four times less that of a farmer in the South.
Neither are the sustainable practices of High Nature Value farming
incentivised by institutional programmes. The following two maps
depict this distorted reality.

That is the typical case of what environmental economists refer to
as “positive externalities”. It is a problem of undervaluing the
commons that cannot be directly bought or sold, but provide wide
social benefits. The worth of pristine groundwater sources,
pollinator insects, native seeds, old-growth forests should reflect
their intrinsic value plus the value of their service to society. And
when the commons’ sustainability depends on the work of someone,
that should be remunerated too.

We all know that severe weather events, soil and water pollution
and biodiversity loss cost public and private money, determine
failures of entitlements, and destroy livelihoods. The work of
averting those undesirable consequences should be assigned a value
that’s obvious, rather than hidden. That is why farmers should
receive a compensation for taking care of commons.

Reducing emissions is ultimately a matter of equality. It matters how targets are set and where they are distributed.|| When ecological services are not adequately valued, disparities ensue, leading to ineffective or harmful policies and market biases. Further lowering of non-intensive farming activities will lead to collapse of ecological functions and impoverishment of local farmers.

The measures indicated by Teagasc in the MACC ¶ to reduce agriculture emissions are not ambitious enough, effectively retaining the status quo. A brave climate policy for agriculture would shift the old paradigm, possibly exploring innovative solutions like intra-sector “cap & share” themes and results-based transfers for multifunctional achievements.

Climate justice is about empowering communities to be the agents of their own resiliency. The resiliency of a community is intimately connected with the good governance of commons for the highest shared benefit. Farmers are the custodians of many commons and their work should be acknowledged and rewarded by government policies and by the market. **

* The ETS sectors are:energy generation; heavy industries, like steel and concrete-manufacturing; and aviation. Agriculture, with the housing sector and transport, are the three sectors that do not participate in the European Emission Trading Scheme (ETS). Ireland’s emissions are so polarised by agriculture that this pushes the relative weight of non-ETS sectors above EU average (for the maths-heads:?￰ﾝﾑﾜ?￰ﾝﾐﾸ?￰ﾝﾑﾆ?￰ﾝﾑﾟ?￰ﾝﾑﾙ?￰ﾝﾑﾛ?￰ﾝﾐﾸ?￰ﾝﾑﾆ?￰ﾝﾑﾟ?￰ﾝﾑﾙ?￰ﾝﾑﾛ?>?￰ﾝﾑﾜ?￰ﾝﾐﾸ?￰ﾝﾑﾆ?￰ﾝﾑﾈ?￰ﾝﾑﾇ?￰ﾝﾐﾸ?).

† 28 and 256 times more, respectively, according to their Global Warming Potential (GWP) over a 100 years time horizon. GWP only capturesthe instantaneous heat-trapping power and downplays the dynamic effect. The proposed GWP* factors in the time variable, making it much more accurate when the concern is the cumulative level of emissionsover a period.

‡ Of course,livestock intensity is not the only driver of agriculture GHGs emissions, but it is the one that has the biggest impact. Differences in emission factors between animal speciesare to be taken into account too, as the practice of extensive tillage which requires more fertilisers.

§ Traditionally, intensive systems are clustered in the South and South-East.Cavan is an exception, but it has intensive pig farms that crank up the level. However, pigs emission factors are lowin terms of direct methane emissions, but quite substantial in terms of manure emissions, so the net effect may be slightly lower. Adjusting for the emissions factor will harmonise the data. Farming intensity is also a driver of other farm-born environmental threats, like nitrogen pollution.

|| According to the Principle of Common but Differentiated Responsibilities,established at the UNEarth Summitin Riode Janeiro in 1992, areas withhigher historical contribution to global emissions should undertake the biggesteffort in abating them.

** To know more about the relationship between commons, climatejustice, and the cap & share system, check Justin Kenrick, “The Climate and The Commons”,in Sharing for Survival: Restoring the Climate, the Commons and Society;Feasta, 2012; Dublin.

An Taisce submits report to the OECD on the failure of Irish sustainable transport policy: What lessons can be learned to ensure...