Smart Energy Europe: A Plan to provide 100% of ALL ENERGY using Renewable Energy to Europe

Smart Energy Europe Connelly et al 2016 (300 citations, peer reviewed;  free similar paper) details a map of the transition from the current energy system to one using 100% renewable energy for All Energy (All Energy is all energy used in the economy:  electricity, transportation, heat and industry).  They find that using renewable energy for All Energy will cost about the same (within 10%) as using fossil fuels in Europe.  In addition, there will be about 10 million new jobs created and no money exported to other regions for fuel so the economy will expand.  Their plan includes the expense of building out all the renewable generators, all storage required and the expense of additional infrastructure like district heating.

There exists a large amount of peer reviewed literature (Jacobson 2018,  Aghahosseani et al 2017,  Hansen et al 2019 ) on the topic of converting to a completely renewable energy system.  This post details one proposed pathway to get to 100% non-carbon energy in Europe.  For other parts of the world similar paths would work.  Examining the pathway for Europe allows us to see key points for a 100% non-carbon world.

It has been shown ( Aghahosseini et al 2017) that it is cheaper to build out a bigger system than a smaller system.   For example, it is cheaper to build out a system for all the USA than one for each state.  This is logical since some states like Florida have large solar resources while the Mid-West has a large wind resource.  It is cheaper for Florida to import wind energy at night than to generate all its own energy.   Many plans now cover large grids.It has also been shown (Lund et al 2017) that it is much cheaper to build out a complete energy system (electricity, transportation, industry and heat) than to build out separate systems for each energy need.  Plans that focus on electricity only are not as useful for long range system planning because they are not efficient.

In Smart Energy they point out three key characteristics of the fossil energy system:

Because storage is so cheap using fossil fuels the system has developed to be very inflexible.  Using intermittent renewable sources (primarily wind and solar), a more flexible energy system is required.

Smart Energy Europe describes a renewable energy system where the energy systems (electricity, transportation, heat and industry) are interwoven.  The system is much more efficient when interwoven compared to separate.

Nine steps are set out to calculate the transformation from fossil energy to renewable energy.  These are not actual proposed steps, they are steps used to calculate the costs of the conversion to renewable energy.  In reality, several steps are implemented at the same time.  By evaluating the changes necessary at each step we determine the critical changes that have to be implemented.

The nine steps are:

The energy system is now entirely renewable energy.  Key observations from these steps are discussed below.

2) Nuclear power is inflexible and must be run all the time to be economic.  Removing nuclear allows the amount of variable renewable energy to be substantially increased.  There is a small increase in CO2 released.

4) Converting to electric cars reduces the emitted CO2 and increases electric demand.  Charging cars is flexible because if electricity is cheap during the day cars can be charged then but if electricity is cheaper at night the cars can be charged at night.  The increased demand combined with more flexible charging of cars enables more renewable energy in the system.

5) Electric heat pumps are much more efficient than boilers to supply heat.  Replacing fossil heaters in businesses and homes with heat pumps reduces CO2 emissions, reduces the primary amount of heat required and increases the percentage of all energy that is electric.  More renewable energy can be used in the system.

6) District heating uses less energy than individual heat pumps where it is economic.  In addition, district heaters have large storage systems where heat (or cold) is stored for future use.  Heat storage is about 100 times cheaper than electrical storage H Lund et al 2016,  .  Implementing district heat reduces electricity demand and makes the system much more flexible.  For example, currently many industrial heat pumps run all night , when electricity is cheap, and store the heat in large water tanks.   During the day the hot water is used to heat buildings.  The heat pumps can be run any time electricity is cheap and additional storage is cheap to build.  The combination of demand flexibility and heat storage add much resilience to the system. 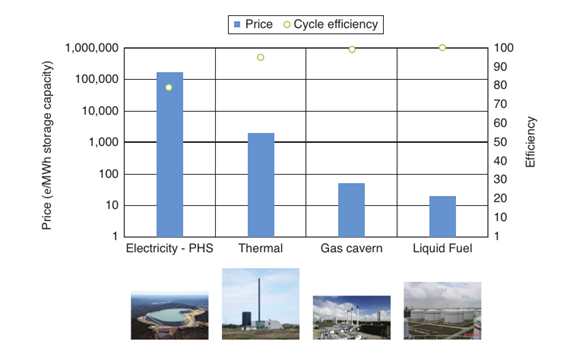 7) Equivalents of natural gas, gasoline, diesel fuel and jet fuel can be made from electrolysis of carbon dioxide and water, by the decomposition of biomass or a combination of these processes.  These are called electrofuels.  Substituting electrofuels for fossil fuels results in a large increase in electricity demand.  Additional flexibility in energy demand is a key benefit (electrofuel plants are generally assumed to shut down first when electricity supply is low).  In addition, the electrofuels can be stored in existing fossil fuel storage.  Storage of electrofuels is approximately 1,000 times cheaper than storage of electricity.  H Lund et al 2016,   This supercheap storage of energy is a key benefit of examining all the energy system and not just electricity.

8) This step converts all remaining uses of fossil coal and oil to natural gas.

9) In this step more electromethane is produced to make the system entirely renewable energy.   Combined cycle gas turbines burning methane provide electrical back up on days when the wind and sun are not strong enough to provide enough electricity. 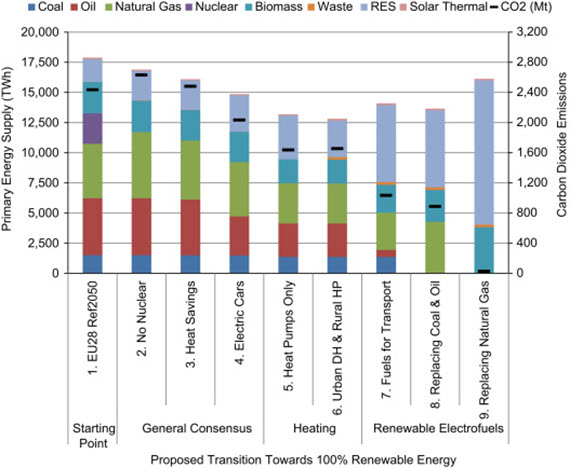 The final renewable energy system would consist of approximately:

Greater electrical demand allows a higher percentage of electricity to be generated by intermittent renewable sources (wind and solar).

Large amounts of expensive electrical storage are not necessary.

District heating helps store energy in addition to being an efficient source of heat.  It makes sense to have policies to promote district heating.

Likewise policies that support increasing heat efficiency of buildings are important to implement.  Building codes that require greater efficiency save money and reduce the amount of energy needed in the system.

Converting fossil energy usage to natural gas helps the transition to renewable energy in the end.

Building combined cycle gas peaker units combined with electromethane provides backup energy.  The system should be set up so that as little gas peakers as possible are used.

Subsidizing the production of electrofuels will help get that industry started.  They can implement scale up and develop more efficient methods of manufacture of their products.

Electrofuels are a very cheap way to store energy long term.  Using electrofuels for storage can be cheaper than other proposed storage like pumped hydro and batteries.

Because it is so inflexible nuclear power does not work well in a renewable world.  In addition, it is very expensive electricity.

The Smart Energy plan includes other types of renewable energy like hydropower and geothermal.  They were left out for brevity.

The authors of Smart Energy Europe did not optimize the system for lowest cost.  There are a number of items like the amounts of wind and solar power, how bioenergy is utilized and modal shifts in the transport sector that would lower overall costs.  This analysis was designed to show that renewable energy was possible, similar in cost and achievable using existing technology.  Further optimization may result in lower costs and result in an even more competitive system.

The system described in Smart Energy Europe is completely different from Jacobson’s system in his papers.   Both systems lead to complete renewable energy systems at a cost similar to or less than fossil fuels.  This indicates that there are many ways to build a cost effective renewable system.  Additional benefits accrue from lower pollution and local investment.  The only thing holding us back from switching to renewable energy is political will.