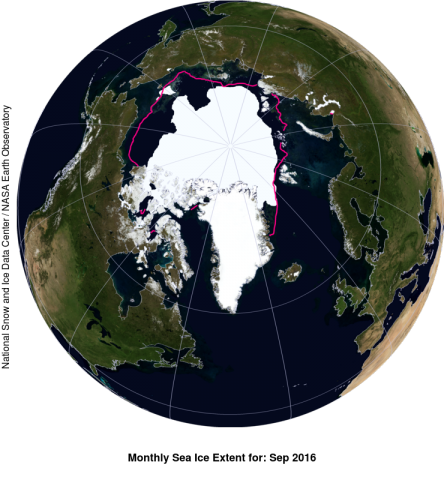 BOULDER, Colo.—At the end of its melt season Arctic sea ice extent stood at second lowest in the daily average and fifth lowest in the monthly average, according to scientists at the National Snow and Ice Data Center at the University of Colorado Boulder.

“The 2016 melt season started with a lot of fairly thin ice,” noted NSIDC scientist Julienne Stroeve. “This may help to explain why, despite summer weather unfavorable to sea ice loss, extent at the seasonal minimum ended up tied for second lowest.”

The cause for the rapid rate of ice growth after the seasonal minimum remains to be fully assessed, but according to NSIDC director Mark Serreze, “The evidence suggests that once the minimum was reached, there wasn’t much heat left on the topmost layer of the ocean, so it only took a little bit of cooling for ice to form.”

Arctic sea ice cover grows each autumn and winter as the sun sets for several months, and shrinks through spring and summer. Each year, Arctic sea ice reaches its minimum extent in September. The downward trend in the extent of summer sea ice influences how much sunlight is reflected versus absorbed, which in turn affects climate. The loss of summer ice is affecting Arctic ecosystems and is making the region more accessible to shipping and other activities.

NSIDC scientists said an intense wind pattern that spanned nearly half of the continent from the Wilkes Land area to the Weddell Sea in September contributed to the early Antarctic maximum. Stronger than average low pressure in this area, coupled with high pressure near the Falkland Islands in the southern Atlantic, and near the southern tip of New Zealand in the Pacific Ocean, created two regions of higher northwesterly winds.